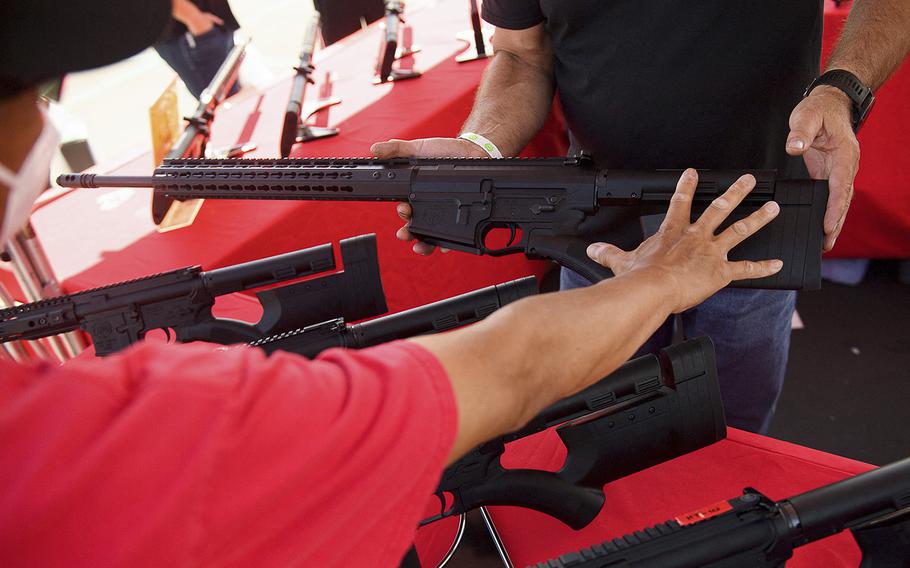 A clerk shows a customer a TPM Arms LLC California-legal featureless AR-10 style .308 rifle displayed for sale at the company’s booth at the Crossroads of the West Gun Show at the Orange County Fairgrounds on June 5, 2021, in Costa Mesa, California. (Patrick T. Fallon/AFP via Getty Images/TNS)

LOS ANGELES (Tribune News Service) — In May, a federal appeals court ruled that California's ban on semiautomatic rifle sales to adults younger than 21 was unconstitutional. On Wednesday, that same court, the U.S. 9th Circuit Court of Appeals, reversed itself, sending the case back to a lower court to be retried.

What happened between the two decisions was a groundbreaking ruling from the U.S. Supreme Court that did not just say limits against the carrying of firearms in states such as New York and California are unconstitutional.

That history standard, California's attorneys argued in the case ruled on Wednesday, "dramatically changed the ground rules" for litigating gun laws, and therefore required the case to be reopened for the gathering of new evidence in the lower court, including from historical records.

Returning the case to a lower court for reconsideration — known as a remand — "will allow the parties to present a full historical record under the standard announced in Bruen," the state argued in a court filing in July.

It also argued the Bruen decision was more narrow than some have suggested, and that California's law restricting sales of semiautomatic rifles to the youngest adults remained constitutional notwithstanding Bruen.

The 9th Circuit agreed insofar as it granted the remand. But it provided little explanation for why it did so and offered no new conclusions of its own about the constitutionality of the underlying sales ban.

In a statement to The Times Wednesday, the California attorney general's office said it looked forward to "defending this law in the district court to protect the public safety of Californians and so that they can safely live, work, and congregate without fear of becoming a victim of gun violence."

"California's constitutional, commonsense gun laws have proven effective in preventing gun-related deaths," it said. "We intend to take any and all action necessary to defend our state's gun laws."

Attorneys for Matthew Jones, the lead plaintiff in the case, either declined to comment or did not respond to a request for comment.

The decision was consistent with those the 9th Circuit has made in several other important gun cases out of California and other western states — sometimes over the objections of gun rights advocates and some of the court's own conservative judges.

It has also remanded cases challenging COVID-19-related closures of gun stores, ammunition shops and firing ranges in some California jurisdictions.

But it has not uniformly remanded such cases.

In one example last month, the 9th Circuit instead ordered California and parties suing the state over its ban on large-capacity ammunition magazines to submit arguments on whether the case should be remanded to the lower court, or be taken back up by the 9th Circuit to decide in light of Bruen itself.

Appellate courts such as the 9th Circuit are not designed to preside over new evidence gathering or fact finding in cases. Rather, they consider the lower courts' application of the law in relation to those facts and to established legal precedent — including as set by the U.S. Supreme Court, as in Bruen.

In its recent decisions to remand gun cases, the court's judges have generally issued short orders without explanation. Legal experts, however, see those orders as an acknowledgement by the court that new fact finding — a deeper review of historical gun laws, for instance — may be necessary.

Some of the court's more conservative judges, in dissenting opinions, have concluded the opposite — and lambasted their peers' decisions to remand such cases as unnecessarily forestalling the implementation of a clear and unambiguous 2nd Amendment ruling by the Supreme Court.

Last month, when an 11-judge panel of the 9th Circuit decided to send the Hawaii gun permitting case back to a lower court, four of the judges — one appointed by Reagan, two by George W. Bush and one by Trump — dissented.

Judge Diarmuid F. O'Scannlain, the Reagan appointee who authored the dissent, called the majority's decision to remand the case a "failure to resolve the straightforward legal issues presented," and one that "delays the resolution of this case, wastes judicial resources, and fails to provide guidance to the lower courts of our Circuit."

In that case, a man named George Young had been denied a permit to carry a gun in Hawaii more than a decade ago. The state law says applicants may be issued permits for carrying guns in public, but only if they can show special cause for why they need to do so.

O'Scannlain wrote that the law violated the constitution in the same way the New York law tossed out in Bruen did and that the 9th Circuit should have simply ruled as much.

"We are bound, now, by Bruen, so there is no good reason why we could not issue a narrow, unanimous opinion in this case," O'Scannlain wrote. "The traditional justifications for remand are absent here. The issue before us is purely legal, and not one that requires further factual development."

Alan Beck, an attorney for Young, said O'Scannlain was correct.

"This case has been in litigation for 10 years, and, in light of the fact that this is a pure issue of law, there's actually no need for the 9th Circuit to remand the issue," Beck said. "They should have issued a ruling on the merits."

Still, he said, he's bullish on winning in the lower court now, with Bruen in place.

On Wednesday, a three-judge panel remanded the challenge to California's ban on semiautomatic rifle sales to younger adults without dissent.

Perhaps in a nod to concerns that remanding of such cases wastes time, it did, however, write that if either party were to appeal the lower court's ultimate decision in the case back to the 9th Circuit once more, they could "request expedited consideration."