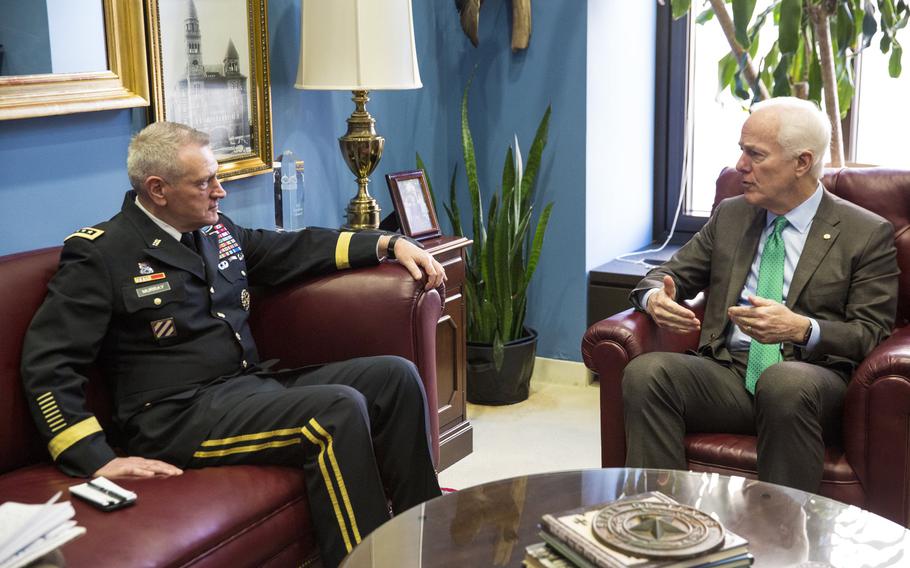 Sen. John Cornyn, R-Texas, met with Gen. John Murray in January 2019 about Army Futures Command, which is headquartered in Austin, Texas. Murray served as commander of Futures Command from its activation in August 2018 until his retirement in December. (Photo provided by Sen. John Cornyn’s office)

AUSTIN, Texas — Lt. Gen. James Rainey was announced Wednesday as the Army’s nominee to take charge of its Futures Command, the same day that legislation was proposed in the Senate to quell a brewing power struggle in the service over its innovation and modernization efforts.

Undersecretary of the Army Gabe Camarillo made the Rainey announcement during a defense conference in Washington and said the general will be “fantastic” for the role, if confirmed by the Senate.

In May, Army Secretary Christine Wormuth issued a directive that the assistant secretary of the Army for acquisitions, logistics, and technology — a job now held by Douglas Bush — has primary acquisition authority to “preserve civilian oversight and control of acquisition matters.”

“Successful delivery of warfighting capabilities requires the input and contribution of many organizations, not the unitary direction of one Army command,” wrote Wormuth, who had been on the job for about a year at the time she issued the memo.

Sen. John Cornyn, R-Texas, chided the directive Wednesday as moving the Army backward as he introduced legislation that would require the Army submit a report detailing the role of Futures Command in modernization and the role of the assistant secretary’s office.

“[Futures Command] was originally created to streamline some of the bureaucratic delays and facilitate the overall modernization mission and since its creation has been delivering proven results,” according to Cornyn’s office. “Even though their different and more modern methods of doing business have managed to overcome outdated processes, the current [President Joe] Biden-appointed leadership in the Army is working to roll back [Futures Command’s] authority to a centralized civilian-run desk at the Pentagon.” 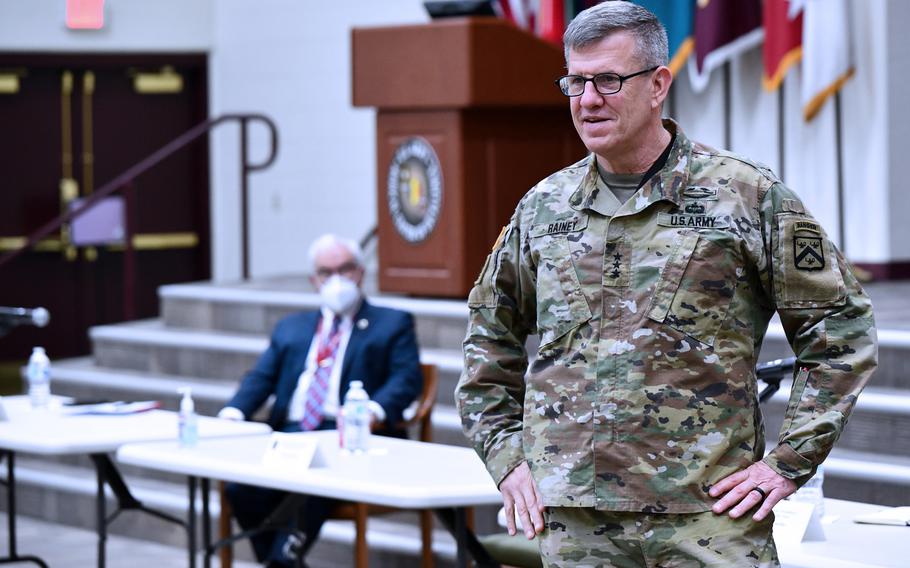 Army Lt. Gen. James Rainey, the deputy chief of staff for operations, plans, and training, was nominated Wednesday, Sept. 7, 2022, to be the next commander of Army Futures Command. (Jose Rodriguez/U.S. Army)

Also pending with the Senate is Rainey’s promotion to four-star general, which alleviates the speculation that the Army had delayed the nomination because it intended to further reduce the scope of Futures Command.

When the Army established the command in 2018 to help the service innovate and modernize at a faster pace, it took authority away from existing Army organizations, particularly from the assistant secretary of the Army for acquisitions, logistics, and technology. The move was intended to allow the service to move faster and get new technology to soldiers before its obsolete.

The report to Congress required in Cornyn’s bill would also outline for lawmakers the impact that Wormuth’s directive has had on the Army’s overall modernization mission, according to the senator’s office. Cornyn introduced the bill Wednesday to make certain that he has the option of getting it into the fiscal 2023 National Defense Authorization Act, the annual bill that sets spending and policy for the Defense Department.

The House already passed its version of the NDAA, which includes language similar to Cornyn’s bill. It states if the Army doesn’t complete the report within 180 days, Wormuth’s directive issued in May will be unenforceable.

Mark Cancian, senior adviser with the Center for Strategic and International Studies, a Washington think tank, said the tension between Futures Command and the acquisition offices at the Pentagon is nothing new.

“My personal opinion is that the Army Futures Command was never sustainable. It was a great idea, but it just duplicated too much of existing organizations,” he said. “This tension is not new. What is new is that you have some change in leadership, and now the leadership is not as committed to this new concept.”

However, keeping a four-star general atop the organization is a statement of continuity, Cancian said.

Landing the Futures Command’s headquarters has been an economic boost for Texas. It’s estimated in 2021 that the command contributed about $371 million to the state economy and some 2,200 direct and indirect jobs supporting the headquarters based in Austin. It has also established partnerships with some of the largest universities in the state, including the University of Texas at Austin and Texas A&M University.

About 19,000 personnel worldwide are assigned to Futures Command, with about 500 working in Austin, according to the command. Of those in Austin, about 100 are service members.

Camarillo said Wednesday that Wormuth’s directives are intended to build upon the success that the Army has seen in the last four years of Futures Command collaborating with the service’s more traditional acquisition paths. The Army in the last year has awarded contracts for the next generation squad weapon and mobile protected firepower, he said.

“We've got a tremendous amount of momentum headed in our modernization portfolio and it's working well,” Camarillo said. “With regard to roles and responsibilities … it's really important that we don't fall into the trap of believing any false myths. And I think the greatest false myth in acquisition, having worked in it for many years myself, is that any one organization or stakeholder is singularly responsible for acquisition outcomes. It always involves a team of organizations that work together.”

Cynthia Cook, director of CSIS’s Defense-Industrial Initiatives Group, said these pendulum swings of authority are expected and can be a good thing.

“It can force some freshness and some rethinking,” she said. “Just because things are being moved … doesn't necessarily mean that things are going poorly. It could mean that there's clarity of priorities that aren't being met because of organizational structure.”