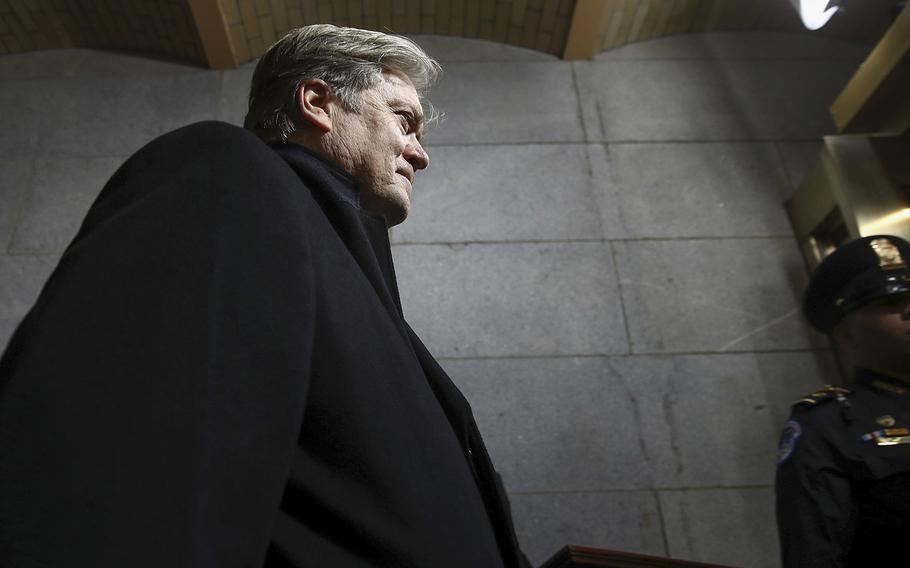 Then- Senior Counselor to the President Steve Bannon arrives on the West Front of the U.S. Capitol on Jan. 20, 2017, in Washington, for Donald Trump’s inauguration ceremony as the 45th president of the United States. (Win McNamee via AP/Source: Pool Getty Images North America)

NEW YORK — Steve Bannon is expected to surrender to state prosecutors on Thursday to face a new criminal indictment, people familiar with the matter said, weeks after he was convicted of contempt of Congress and nearly two years after he received a federal pardon from President Donald Trump in a federal fraud case.

The precise details of the state case could not be confirmed Tuesday evening. But people familiar with the situation, speaking on the condition of anonymity to discuss a sealed indictment, suggested the prosecution will likely mirror aspects of the federal case in which Bannon was pardoned.

In that indictment, prosecutors alleged that Bannon and several others defrauded contributors to a private, $25 million fundraising effort, called "We Build the Wall," taking funds that donors were told would support construction of a barrier along the U.S.-Mexico border.

The Manhattan District Attorney's Office, which handles state-level prosecutions, has been evaluating Bannon's alleged involvement in that scheme since shortly after Trump pardoned him, The Washington Post reported in February, 2021.

Bannon, a former top strategist for Trump who was briefly a White House aide, pleaded not guilty to the federal charges in August 2020, after authorities pulled him off a luxury yacht and brought him to court. He was accused of pocketing $1 million in the scheme.

Months later, in the last hours of his presidency, Trump included Bannon on a sweeping clemency list of about 140 people.

Two other men, including disabled veteran Brian Kolfage, pleaded guilty in federal court in connection with the fundraising scheme. A trial involving a third alleged participant, Timothy Shea, ended in a mistrial in June when the jury could not reach a unanimous verdict.

The new state indictment comes less than two months after Bannon, 68, was convicted of contempt of Congress for refusing to cooperate with the House committee probing the Jan. 6 insurrection.

The state case will be handled in New York State Supreme Court by Manhattan District Attorney Alvin Bragg, D. A spokesperson for Bragg declined to comment when reached Tuesday evening.

But three people familiar with the matter confirmed Bannon is expected to turn himself in on Thursday.

When reached for comment, Bannon issued a statement through his spokesperson that described the indictment as "phony charges" and "nothing more than a partisan political weaponization of the criminal justice system."

In addition to the Bannon investigation, Bragg's office also inherited a long-running investigation into Trump and his business practices. Last month, Trump's longtime chief financial officer, Allen Weisselberg, pleaded guilty in connection to a tax scheme. The Trump Organization is expected to face trial in the tax case in October.

Investigators from the New York State attorney general's office have teamed up with the district attorney's lawyers to assist in both the Trump business practices case and the Bannon case.

Bannon's conviction in July for contempt of Congress related to the Jan. 6 investigation made him the closest Trump confidant to be convicted criminally in the fallout of the attack on the U.S. Capitol. The two-witness trial lasted just a week and established that Bannon ignored a congressional subpoena that he was legally obligated to answer.