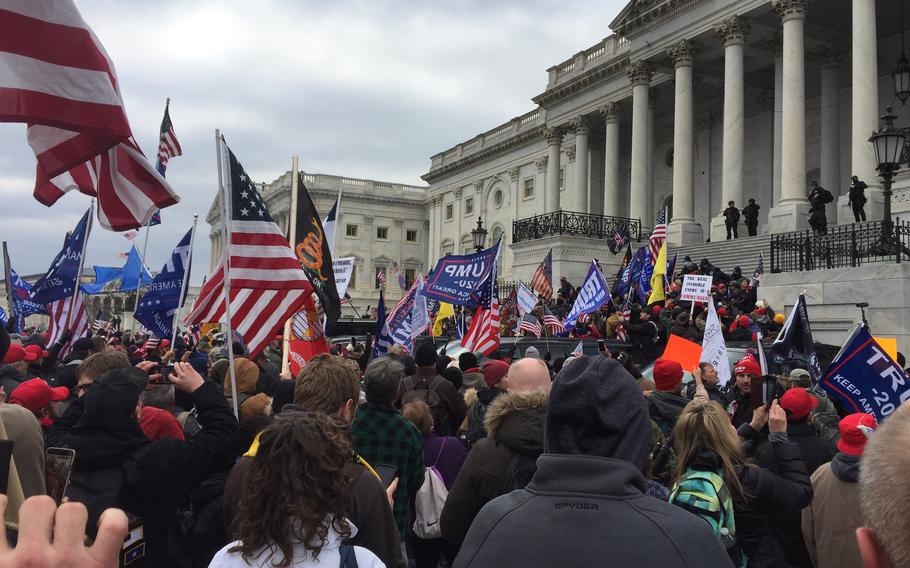 A crowd of Trump supporters marching on the US Capitol on Jan. 6, 2021. A Navy reservist has been indicted in Virginia on charges of possessing unregistered firearms months after authorities in D.C. charged him with breaching the Capitol with the Proud Boys extremist group during the Jan. 6, 2021, attack. (Wikimedia Commons)

A Navy reservist has been indicted in Virginia on charges of possessing unregistered firearms months after authorities in D.C. charged him with breaching the Capitol with the Proud Boys extremist group during the Jan. 6, 2021, attack.

Hatchet M. Speed has been described by federal prosecutors as a heavily armed Nazi sympathizer with a top-level U.S. government security clearance. Speed until recently worked with a U.S. defense and intelligence cyberoperations contractor based in Vienna, Va., but resigned as he delved deeper into fringe ideologies, authorities said.

An undercover FBI employee sent to befriend Speed said he spoke about using violence to further “anti-government and anti-Semitic ideologies” and remarked that many “enemies” were clustered in the Washington area, according to court documents.

The FBI said Speed in private praised Eric Rudolph, the 1996 Centennial Olympic Park bomber in Atlanta, and also “Unabomber” Ted Kaczynski and Adolf Hitler, whom he allegedly called “one of the best people that’s ever been on this Earth.”

Federal prosecutors in D.C. charged Speed in June with misdemeanor offenses, accusing him of breaching the Capitol during the Jan. 6 insurrection with the Proud Boys group. An FBI search of Speed’s residence found 13 firearms, seven silencers, evidence of three more unrecovered suppressors and 25 firearms belonging to housemates, according to court documents.

After the Jan. 6 attack, Speed went into a “panic” and made more than $50,000 in firearms-related purchases, including a dozen pistols, revolvers, shotguns and rifles, prosecutors said.

A grand jury in Virginia indicted Speed on three counts of unlawful possession of a silencer for which he lacked registration, according to documents unsealed Wednesday. If Speed were convicted, each offense would be punishable by up to 10 years in prison.

Speed appeared briefly in Alexandria, Va., federal court and was released pending trial with the same conditions imposed by the D.C. federal court, including home detention with GPS monitoring and a ban on possessing weapons.

Assistant U.S. Attorneys Thomas Traxler and Amanda Lowe wrote in a court filing Wednesday that Speed was a risk to the community and noted that the D.C. court allowed only limited exceptions to his home detention, such as medical appointments.

A federal public defender for Speed, Courtney Dixon, declined to comment after the hearing Wednesday. Speed’s arraignment is scheduled for Sept. 22.

Speed is not accused of violence, has no criminal history and retains Top Secret/Sensitive Compartmented Information (TS/SCI) clearance, the government has said.

Speed, a petty officer first class, is assigned to the Naval Warfare Space Field Activity at the National Reconnaissance Office in Chantilly, Va., part of the U.S. intelligence community, according to court filings. He previously worked as a software developer for a cyber analytics firm cleared for classified work for the Pentagon and other federal agencies, the FBI said.