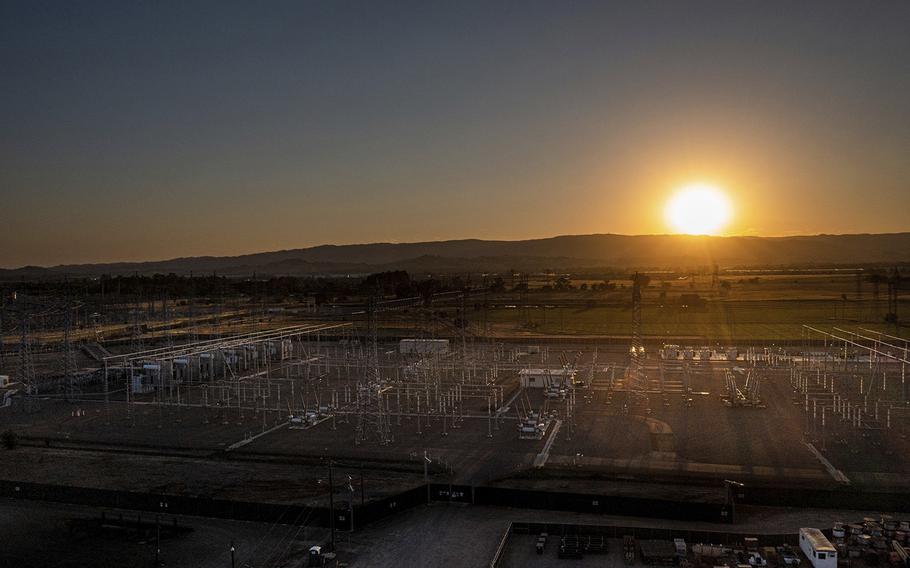 Electrical transmission towers at a PG&E electrical substation during a heatwave in Vacaville, California, on Sept. 6, 2022. (David Paul Morris/Bloomberg )

California made it through the worst of the heat wave without ordering rolling blackouts, but it's not over yet.

The heat is now expected to slip, but only slightly, for the next few days. There were some power outages reported around California, but they weren't ordered by the grid operator. As of 8 a.m. in New York, about 11,000 customers were without power in California, especially in Santa Clara county south of San Francisco, according to PowerOutage.us.

"It is going to stay hot through Friday but not as extreme as we saw yesterday," David Rowe, a National Weather Service meteorologist, said Wednesday. "It will be 105 to 110, so we won't say it's cooler -- just not as hot."

Downtown Sacramento reached 116 degrees Fahrenheit (47 Celsius), an all-time high in records going back to 1849, beating the old mark of 114 set 1925, and Stockton tied its all-time high at 115. Across California and the U.S. West "a slew records were set yesterday," said Bob Oravec, a senior branch forecaster at the US Weather Prediction Center.

More records may fall Wednesday. In Southern California, Burbank may reach 109, which would be at least a high for the date, and Riverside could get to 109.

The heat pushed electricity demand to 52 gigawatts Tuesday, easily breaking a record that stood since 2006, according to the California Independent System Operator, which oversees the power grid. The state issued emergency alerts via cell phone in several counties asking for immediate power conservation.

Demand immediately plunged in response, according to grid data. Emergency measures were finally lifted at about 9 p.m. local time.

All-time highs are unusual. Many temperature records are simply for a specific date, so reaching a new record marks an extreme. Santa Rosa, Napa, Livermore, Redwood City, San Jose, and King City all set or tied their hottest temperatures ever on Tuesday, according to the weather service.

PG&amp;E Corp. on Tuesday notified about 525,000 homes and businesses that they could lose power for up to two hours, but in the end the state's biggest power provider was able avoid doing so.

California faced a similar energy emergency Monday, which was alleviated in part by activating temporary gas-fired power plants operated by the California Department of Water Resources. The current heat wave, which began in the last week of August, is remarkable in both its ferocity and duration, according to officials.

The prospect of outages underscores how grids have become vulnerable in the face of extreme weather as they transition from fossil fuels to renewable energy. California has aggressively closed natural-gas power plants in recent years, leaving the state increasingly dependent on solar farms that go dark late in the day just as electricity demand peaks. At the same time, the state is enduring the Southwest's worst drought in 1,200 years, sapping hydropower production.

Clouds and moisture filtering in across the West from Hurricane Kay, now off Mexico's Baja California coast, will help cool things down, Rowe said. In addition, a large high pressure system that has been allowing the heat to build across the West will start to break down by the weekend, Oravec said.

By Sunday, many places across California and the West could be as much as 20 degrees cooler than they are now.