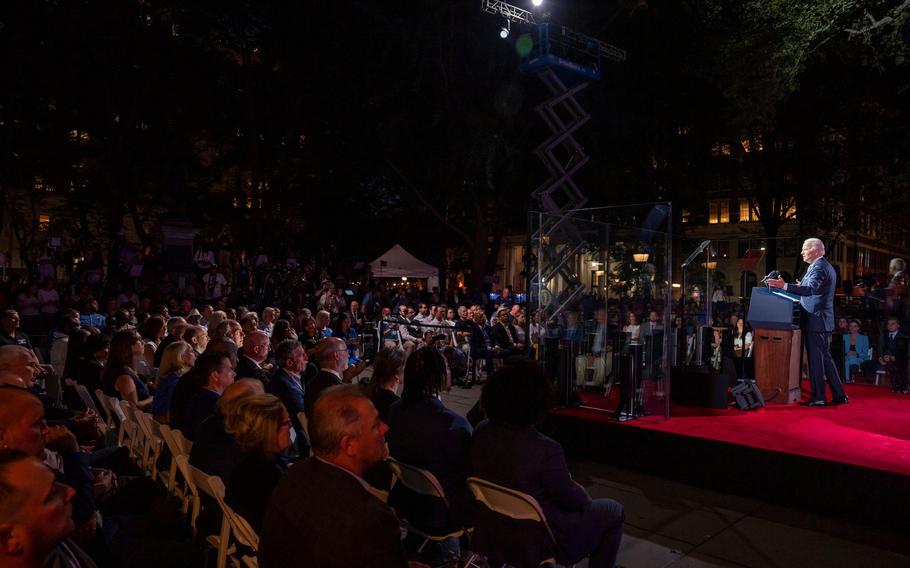 While President Joe Biden warned the nation about threats to democracy in a prime time address on Thursday, ABC was airing a game show, "Press Your Luck."

As Biden spelled out his objections to former president Donald Trump and "MAGA Republicans," NBC was broadcasting a rerun of "Law and Order." CBS skipped the speech to show a rerun of "Young Sheldon."

The networks' rejection of Biden's speech - delivered in front of Philadelphia's Independence Hall, washed in dramatic red lighting as Marines stood guard - marked an unusual moment in the long relationship between the White House and the nation's most powerful broadcasters.

Presidents rarely make speeches during prime TV viewing hours, and typically only do so to address a national crises or matter of exceptional urgency. The networks, in turn, typically carry presidential speeches when the White House requests the time and after previewing the president's remarks.

However, they have passed on speeches that were part of campaign rallies or events, or when the subject was deemed insufficiently important or newsworthy. The networks, for example, decided not to carry a speech on immigration reform by then-president Barack Obama in November of 2014.

People involved in negotiations over Thursday's address said the networks deemed Biden's remarks as "political" in nature and therefore decided not to televise it. These people, who spoke on the condition of anonymity to describe sensitive discussions, cited the speech's criticism of Trump - Biden's possible political opponent in 2024 - and its timing two months before the midterm elections.

In the Thursday night address, Biden argued that Trump and his supporters "represent an extremism that threatens the very foundation of our republic."

Using the acronym for Trump's Make America Great Again slogan, he said, "MAGA Republicans want to take America backwards, backwards to an America where there is no right to choose, no right to privacy, no right to contraception, no right to marry who you love." He also referenced the Jan. 6, 2021 riot at the Capitol, saying, "We can't be pro-insurrectionist and pro-American. They're incompatible."

Biden's speech was carried live on CNN and MSNBC, but it was not shown on Fox News, the most-watched of the cable-news channels. Fox stuck with its usual 8 p.m. eastern-time program, a commentary show hosted by conservative pundit Tucker Carlson.

Representatives for the broadcast networks as well as the White House declined to comment for this story.

The networks' decision not to carry the speech all but ensured that Biden's remarks will reach a far smaller audience than the millions of viewers who typically watch live presidential addresses on ABC, CBS and NBC.

Some commentators criticized the networks for declining to air the speech. "The networks refusing to cover Biden's speech (presumably because it was going to be critical of Trump and/or not newsworthy enough) is precisely the problem" confronting democracy, tweeted Dartmouth University political scientist Brendan Nyhan, in one of a number of tweets calling attention to the networks' decision.

But George Washington University professor Frank Sesno, a former CNN anchor, said in an interview that the speech "was framed in very partisan, political terms, and though that may reflect reality, in strictly editorial terms it makes this a close call as to whether networks should interrupt regular programming and provide the White House 30 minutes of airtime."

Sesno added that while he personally believes that all Americans should be concerned about "the influence of a people and a party that deny reality [and] seek to undermine elections," he also thinks that networks have to make their coverage decisions "based on the newsworthiness of the speech and whether it's a true 'address to the nation' or primarily political in nature."

The non-coverage stands in contrast to the three networks' decision in June to pre-empt their entertainment programs to air the first hearing of the House select committee's investigation of the Jan. 6, 2021 Capitol riot.

That hearing occurred during prime viewing hours, just as Biden's speech did on Thursday, and was covered as a news event, with the networks' leading anchors introducing and analyzing the proceedings. Fox News skipped the hearing, choosing to air its prime time opinion programs instead.