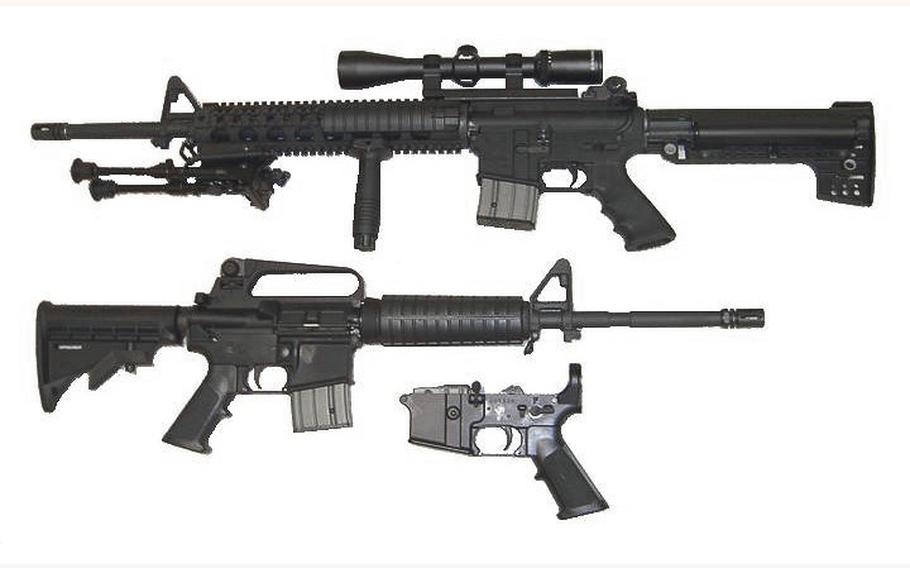 "Do you realize the bullet out of an AR-15 travels five times as rapidly as a bullet shot out of any other gun, five times - is lighter - and can pierce Kevlar?"

"The most common rounds fired from an AR-15 move almost twice as fast as that from a handgun."

In a speech in Wilkes-Barre, Pa., on Tuesday, President Joe Biden stated that a round from an AR-15 semiautomatic rifle travels five times faster than any other gun. When asked about the evidence for this claim, a White House official pointed to his remarks in July - "almost twice as fast" - as a more specific statement.

Translation: the president bungled the statistic the second time around. As is often the case with Biden, a carefully-crafted sentence in his prepared text got hyped up in his retelling weeks later.

Biden was clearly wrong in his statement this week.

"President Biden's statement that a bullet shot from an AR-15 travels 5x faster than a bullet shot out of 'any other gun' is false," said E. Gregory Wallace, a law professor at Campbell University who has closely examined the lethality of AR-15s, in an email. "His statement that the AR-15's bullet can penetrate the soft Kevlar vests worn by law enforcement is correct." But Wallace added that the statement lacked context: "That is true of almost all centerfire rifle bullets. Body armor protection against rifle bullets require steel, ceramic, or composite plates."

A 2016 academic study by a group of trauma surgeons led by Peter Rhee, titled "Gunshot wounds: A review of ballistics, bullets, weapons, and myths," examined the muzzle velocity of various firearms. Muzzle velocity is the speed at which the bullet leaves the barrel of the weapon. That is then used to calculate muzzle energy, which equates to wounding potential. The farther a bullet gets from a firearm, the less energy and wounding power it has.

Meanwhile, an AR-15 5.56 caliber weapon clocks in at 3,251 feet per second. That would be almost three times faster than the 9mm handgun.

"Muzzle velocity is determined by several factors, including bullet size and weight and barrel length, but generally .223 or 5.56 rounds typically fired from AR-15s have a velocities in the high 2000s to low 3000s feet per second (fps)," Wallace said. "Handguns, on the other hand, fire rounds at slower velocities, with 9mm rounds in the 1000-1100 fps range and .45 caliber rounds in the 900-1000 fps range. Centerfire rifles rounds (e.g., not .22 caliber rifles) typically have higher velocities than handguns."

Within those parameters, the more careful sentence Biden uttered in July - "the most common rounds fired from an AR-15 move almost twice as fast as that from a handgun" even slightly understates the case.

But Wallace also said the "larger point [Biden] seems to be making about AR-15s is that they are more lethal or dangerous than 'all other guns' because of their high velocity rounds. . . . Considering all relevant factors, including velocity, the AR-15 is more lethal than some firearms, but less lethal than others." At 100 yards, the AR-15's velocity is only slightly faster than most hunting rifles.

In a 2020 article for the Tennessee Law Review, Wallace criticized several legal rulings that he said assumed AR-15s are more lethal than other firearms. "The AR-15's rate of fire is virtually identical to non-banned semiautomatic handguns, rifles, and shotguns," he wrote. "Its accuracy is better than some firearms but worse than others. Like any rifle, its bullets typically cause more serious wounds than handguns, but not as serious wounds as larger-caliber hunting and target rifles."