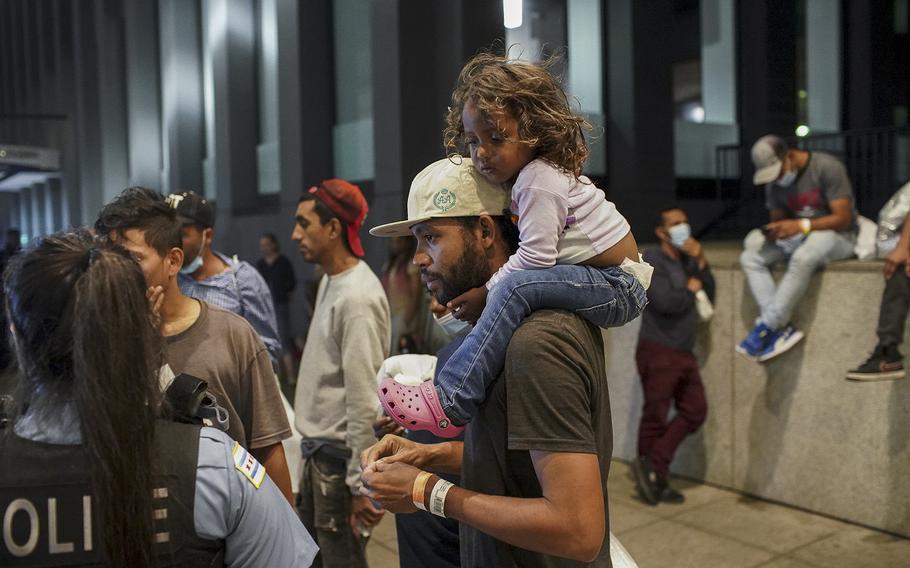 Elier Salazar Chacon, 29, carries his 3-year-old daughter Danieli Cataleya Salazar while talking with a Chicago police officer after arriving on a bus with 75 other migrants from Texas at Union Station on Aug. 31, 2022, in Chicago. (Armando L. Sanchez/TNS)

FAIRVIEW, Texas (Tribune News Service) — After creating a firestorm in New York, Texas Gov. Greg Abbott said Wednesday that he plans to bus migrants at the southern border to other communities known as “sanctuary cities” around the nation.

In another development, figures released this week show that Texas has spent more than $12 million to bus migrants from the border to New York and Washington, D.C. — a cost of more than $1,300 per passenger.

“We are not done yet,” Abbott told a Republican club in Fairview. “There are more cities on the list.”

Abbott would not name the cities he had in mind, but told The Dallas Morning News that a busload of migrants could land in another city Wednesday.

Dozens of cities, counties and states nationwide have declared themselves to be sanctuary cities that welcome migrants and often limit cooperation with federal immigration enforcement officials. Many Republican leaders have expressed disdain for sanctuary cities, and Texas in 2017 passed a bill banning them in the state.

Sending migrants to other American cities is another chapter in Abbott’s plan to antagonize President Joe Biden and Democratic Party mayors over border security. The bus journeys began with Washington as the destination before Abbott added New York City.

As a result, Abbott has been sparring with New York Mayor Eric Adams over the policy, particularly since the additional migrants to the Big Apple have put stress on the city’s resources and ability to handle them. Adams has appealed to the federal government for help.

He also has heavily criticized Abbott, adding that he would send volunteers to Texas to help defeat the governor in his November race against Democrat Beto O’Rourke. Adams called the state’s policy “horrific” earlier this month.

Abbott said the addition of new cities to his migrant busing list does not mean New York is in the clear.

“Just know this. It will not slow down what we’re doing in New York,” Abbott said. “The volume will be increasing altogether.”

From April to mid-August, Abbott’s busing program has transported 9,200 migrants from the U.S.-Mexico border to the East Coast, the Texas Division of Emergency Management told The Dallas Morning News on Wednesday.

Texas is contracting with Wynne Transportation, an Irving-based charter service company, according to various news reports.

Abbott has sought private donations to pay for trips after criticism for using taxpayer money. But the government fundraiser raised only $118,297 as of July 22, far short of its goal, according to a report in the San Antonio Express-News.

In an effort to curb migration, Abbott last year launched Operation Lone Star, which in addition to the busing program includes stationing thousands of Texas National Guard soldiers along the border, arresting migrants for trespassing on private property and inspecting commercial vehicles. So far, it has cost the state $4 billion.