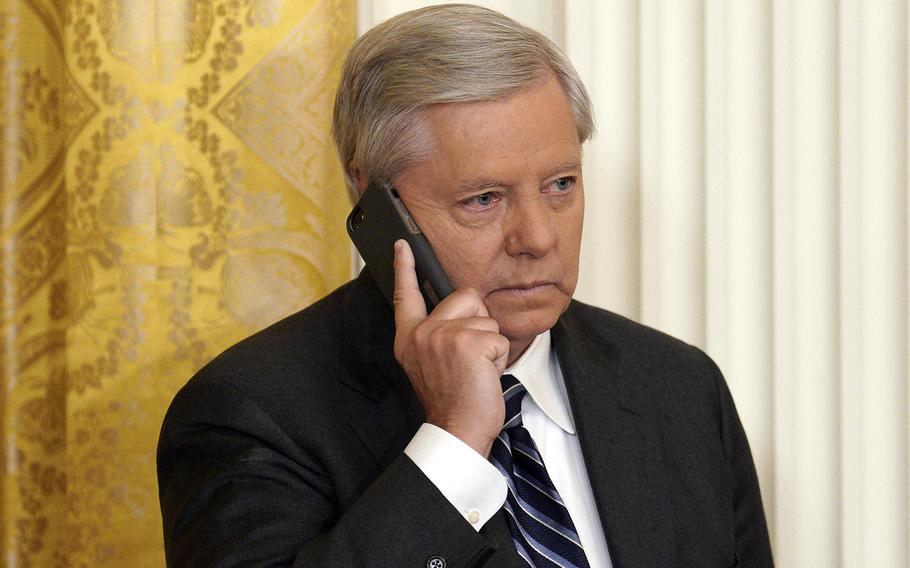 Sen. Lindsey Graham holds a cell phone to his ear at the White House in Washington, D.C., on March 3, 2022. (Yuri Gripas/Abacas Press/TNS)

U.S. District Judge Leigh Martin May, for the second time, rejected requests from Graham's legal team to quash the summons for the senator's testimony in its entirety. But May did say Graham cannot be asked about "investigatory fact-finding" during his calls to the Secretary of State's office and how they relate to his vote to certify the 2020 presidential election.

May said this area of inquiry is protected under the Constitution's speech or debate clause, which shields members of Congress from testifying about anything related to official legislative business.

But Graham can be questioned about any alleged effort to encourage Secretary of State Brad Raffensperger to throw out ballots or alter Georgia's election practices and procedures, May ruled.

"Likewise, the grand jury may inquire into Senator Graham's alleged communications and coordination with the Trump campaign and its post-election efforts in Georgia," May wrote. And Graham can also be asked about his public statements related to the 2020 elections in Georgia, she said.

Raffensperger has said that, during one of Graham's two phone calls, the senator was hinting that the secretary might throw out legally cast votes in counties that had the highest rates of mismatched signatures. This very likely would have aided Trump.

But Graham has strongly denied exerting any such pressure, saying he was simply trying to learn more about the state's election procedures.

On Aug. 15, May denied Graham's initial request to quash his subpoena, finding that Fulton County prosecutors had shown extraordinary circumstances and a special need for Senator Graham's testimony on issues relating to alleged attempts to influence or disrupt the lawful administration of Georgia's 2022 elections.

This cleared the way for Graham's scheduled appearance before the grand jury on Aug. 23. But two days before that, a three-judge panel from the federal appeals court in Atlanta stepped in and ordered a delay, asking May to consider whether some questions posed to Graham should be off-limits under the speech or debate clause.