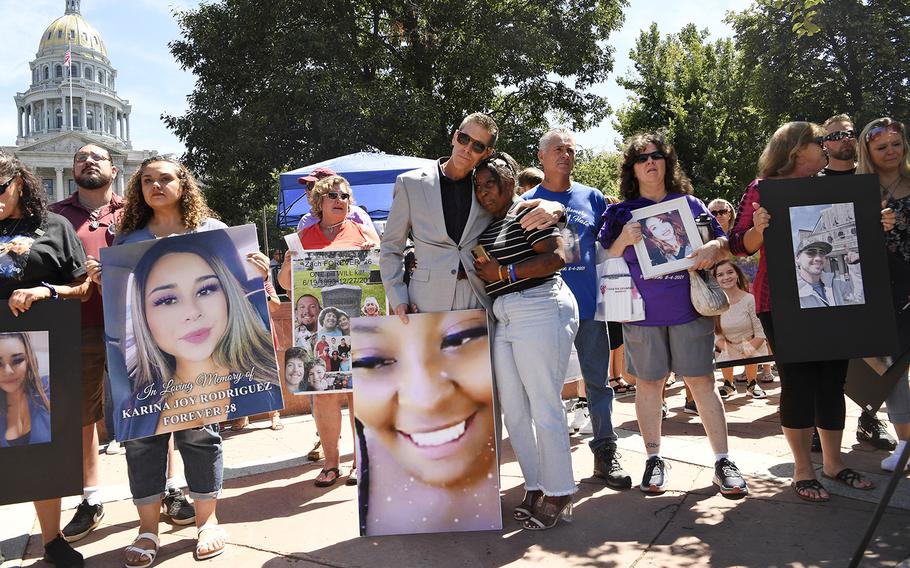 DENVER (Tribune News Service) — About once a month, another of Nicole Richardson’s friends dies.

Richardson, 23, grew up in Denver and started using drugs when she was 17 years old, eventually transitioning to heroin and then fentanyl. She found sobriety two years ago, but since then, at least 15 friends and acquaintances have died from drugs.

While she was using, she witnessed people die. She couldn’t save them.

“I’m shut down from processing death because it happens so much,” she said. “You don’t even ask what happened anymore because it’s always a fentanyl overdose.”

Richardson is one of the tens of thousands of Coloradans impacted every year by the worsening drug epidemic that is killing a rapidly growing number of people in the state. At least 1,881 Coloradans died of drugs in 2021 as fentanyl and methamphetamine continue to push the state’s per-capita overdose rate to the highest level ever recorded, leaving an increasing number of grieving families and friends in its wake.

The age-adjusted rate of overdose deaths in Colorado has nearly doubled in four years, from 16.5 deaths per 100,000 residents in 2018 to 31.7 deaths per 100,000 in 2021, according to recently finalized data from the Colorado Department of Public Health and Environment.

Austin Dibble was a student at the University of Colorado Denver with dreams of opening vacation rentals in Costa Rica. He was an upbeat free spirit who was able to connect with anybody and hold deep, meaningful conversations. The summer he died he was slated to intern with a relative who works in Denver real estate. He was working at a local restaurant and seemed to be thriving, his mom Denise Dibble said.

Austin accidentally overdosed on fentanyl in the bathroom of his Capitol Hill apartment on June 26, 2021. He was 25.

“I just don’t know how it all fell apart so quickly,” Dibble said.

Whoever was with him did not call 911 and took his wallet, Xbox and keys. Police have never recovered the objects and Austin’s family feels that Denver police never seriously investigated his death.

“The loss of him has torn a hole in the fabric of our family that we can fill with memories and grace, but it is still a hole,” his aunt Laurie Krupala said. “Austin’s light shines so bright we still see it.”

Fentanyl is a powerful opioid that has been used legally by doctors for decades. Illicit fentanyl manufactured and distributed by drug trafficking organizations has flooded the drug market in Colorado over the last several years. It is most commonly pressed into pills made to resemble prescription oxycodone pills — called “blues” — but is also laced into or made to look like heroin, cocaine and other drugs.

Some people who use drugs do not know they are consuming fentanyl, while others knowingly use it.

While heroin overdoses overall have declined in Colorado, overdoses from heroin mixed with fentanyl have increased, according to the state data. The same trend is true of cocaine and prescription opioids.

Illicit fentanyl in Colorado is also increasingly found to contain xylazine and other tranquilizers, Miller said. Xylazine, which is not an opioid, extends fentanyl’s high but depresses the central nervous system, leading to an increased risk of overdose death.

“It had the worst hold on me that a drug has ever had,” said Tawnia White.

White, 48, started using drugs after her daughter was killed in a domestic violence incident in 2010, sparking a decade-long spiral. She started drinking heavily and then started using cocaine to mask the effects of the booze. When cocaine no longer gave her the high she sought, she started using methamphetamine and heroin. She used fentanyl for the first time in April 2020 thinking it was heroin and immediately overdosed, though she was revived.

But the overdose didn’t stop her use. Fentanyl became her main drug and she used up to 50 pills a day, even though she knew she was at risk of overdosing again. She started selling drugs to support her use.

“I feel like I was on a slow suicide,” she said. “I was walking around dead.”

She tried to get sober alone several times. She detoxed alone on the floor of a jail cell but relapsed when she was released. She tried to detox alone again in August 2021 in a motel in Black Hawk and ended up in the hospital. After weeks of pain from the detox, she sought treatment and entered an in-patient program at New Beginnings Recovery Center.

She’s been sober for a year and knows she’s lucky to be alive. She started reconnecting with her children and the family she had alienated. She wants other people to know it is possible to stop using.

“There’s hope,” White said. “I never thought I’d be happy again. Some feelings are bad and some are good, but to feel again is great — to feel alive. Fentanyl numbs everything.”

The rising deaths leave behind tens of thousands of grieving families and friends, many of whom feel helpless watching their loved ones struggle with substance use.

Katie, 30, stopped using Facebook six months ago because her news feed had turned into a scrolling list of obituaries detailing the too-early deaths of friends and acquaintances due to fentanyl, meth and heroin.

Katie, who spoke to The Denver Post on the condition that her last name not be used because of an open criminal case, said the deaths increased as the COVID-19 pandemic pushed people into isolation and upended peoples’ routines and support systems.

“I’ve been in the recovery community for a long time, so it’s always been a pretty steady stream of people, but around the pandemic, it started picking up,” she said.

Two of Janelle Campbell’s three sons have had an addiction to meth and she watched her life spin out of control while trying to help them. As a peer coach at Face It TOGETHER, a nonprofit organization that provides coaching for people with addiction and those who love them, she now helps other parents navigate their lives while their child deals with addiction. She tells them what she wished she knew 17 years ago. Parents can continue to love their children and support them, but ultimately it has to be the child’s decision to stop using, she said.

“As parents, we think we can fix it for our kids,” Campbell said. “I couldn’t.”

Despite coaching for years, she still has no words for parents who lose their children to drugs. The best she can do is listen to them talk about their kids and give them space to grieve.

“I always say, ‘I don’t have the words — there’s nothing I can say that would comfort you,’” she said.

The stack of single-page applications from people seeking substance use treatment sits four inches high on Mary Brewer’s desk. Each of the hundreds of pages represents someone asking for help from New Beginnings Recovery Center. They get at least 50 calls for help a week.

The center, in Littleton, has 24 beds for in-patient treatment, which takes between 30 and 90 days.

“This is what breaks my heart,” Brewer said, her hand on the pile.

New Beginnings, which also runs 15 sober living houses, is one of the few treatment centers in the Denver area that takes people without insurance or on Medicaid, she said. The center’s clients include people from all walks of life: from people who are unhoused to airline pilots and lawyers.

The number of people seeking help for fentanyl addiction has increased significantly this summer, Brewer said. She is also seeing younger people — teenagers — looking for treatment.

Miller has also noticed an uptick in young people overdosing and dying from drugs in Jefferson County. The county has extended its drug awareness campaign in schools and Miller is advocating for parents to keep opioid-overdose reversal medication like Narcan in the house.

“Parents should be telling their kids that overdose risk is high, it doesn’t matter what you’re taking,” he said. “It’s just way more dangerous now than it’s ever been.”

To Brewer, one of the most critical solutions to the drug crisis is more money to make treatment accessible to people of all income levels and ages. It’s unknown how many treatment beds there are in the Denver area, but it’s clear there are few options for minors, few options for poor people and few options for people living in rural Colorado. There’s an urgent need for hundreds, if not thousands, of more beds in the state, she said.

“If the drug crisis hasn’t affected you yet, it will,” she said.