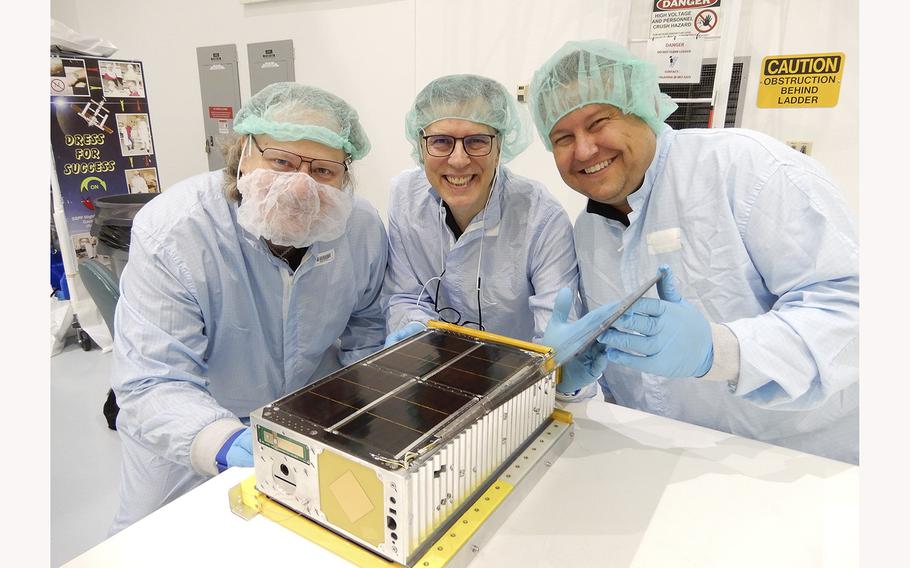 Wesley Faler, Don Smith and Alex Wingeier with the miniature satellite known as a CubeSat that they built. It will hitch a ride onboard NASA’s Artemis 1 and then propel itself into deep space. (Courtesy Team Miles/TNS)

TAMPA, Fla. (Tribune News Service) — If NASA is to boldly go where no man has gone before, the federal agency might have Tampa to thank for it.

NASA is set to launch the unmanned Artemis 1, the first flight of its larger Artemis program mission to build a moon base and send astronauts to Mars.

Such accomplishments will require affordable and reliable deep space communication. That’s where Tampa comes in.

A team of mostly amateurs from around the country — but based out of Tampa — built a CubeSat, which is a miniature, cubed-shaped satellite used in space exploration in recent years.

The size of two loaves of bread side by side, their solar-powered CubeSat will hitch a ride on Artemis 1, get dropped off short of the moon and then propel itself as far as 28 million miles farther. All the while, their CubeSat will transmit information back to Earth.

The story feels ripped from a science fiction movie about the government relying on a hodgepodge group of misfits to fulfill a key mission.

Team Miles’ CubaSat won a seat on the rocket through a contest that could still pay them up to $1 million.

Their 35-person team includes an aerospace engineer and a doctor of radiation physics, but the rest, including Falor, are self-taught amateurs or hobbyists when it comes to space exploration.

They are teachers, artists, software designers and information technology professionals.

“We are dreamers,” said Falor, who has a manufacturing systems engineering degree from the GM Institute.

NASA’s website says that Team Miles’ CubeSat is one of 10 that will be on Artemis 1, with each performing “science and technology experiments in deep space, expanding understanding of lunar science, technology developments, and deep space radiation.”

But the efficiency of the CubeSats will also be tested.

The traditional space satellite can measure up to three stories high and cost billions of dollars. The Team Miles satellite cost around $500,000, funded primarily by private investors and in-kind technology donations.

CubeSats might be necessary for communicating with Earth if man colonizes the moon, visits Mars or travels deeper into space.

Team Miles joined the NASA mission through the Cube Quest Challenge, a contest that started in 2015 as part of NASA’s Centennial Challenge Program, which was meant to inspire people from all walks of life to contribute to the space program.

Team Miles was one of 13 teams to enter the contest and one of just two that was not tied to a university. The other was made up of former NASA interns.

They formed through the nonprofit Tampa Hackerspace, which provides equipment, classes and mentoring for technology driven projects, and learned to build a CubeSat through books and seminars.

To earn a spot onboard Artemis 1, the team submitted hundreds of pages of research detailing how their satellite would work over two years. Judges scored the work and, in 2017, the top three were chosen for the flight and were then charged with completing their CubeSats. Team Miles came in third.

Of those three, their CubeSat is the only one that made it onto Artemis 1 for the Cube Quest Challenge final.

“We kept it simple,” Falor said. “We’re not trying to do a five-year science mission. We don’t have a lot of fancy on board computer software. We were willing to fly with an absolute minimal mission of going somewhere and sending data.”

Falor said a competing CubeSat might get a second chance and be on a rocket in January.

Team Miles could win the $1 million through three contests — furthest distance traveled, longevity and the most data sent in 28 days.

Their data comes from a smaller satellite inside Team Miles’ CubeSat. Designed by high school students through Destination Space, a nonprofit that provides stem programs throughout the country, it will measure plasma waves in space.

There is already private sector interest in the work of Team Miles.

Falor formed the company Miles Space, which has sold the thrusters and communication system used for the CubeSat.

The deep space mission, Falor said, will add to the validity of their technology.

Meanwhile, Team Miles will split contest winnings based on how much work each member put into the satellite.

Some built the technology. Others drew the schematics. Another filmed a fundraising video.

“Even somebody who worked with us for three months at the beginning but wasn’t with us for the finish line deserves something,” Falor said. “Everyone played a role in moving us along.”