The Air Force is testing the ‘Grey Wolf,’ a made-in-Philly helicopter 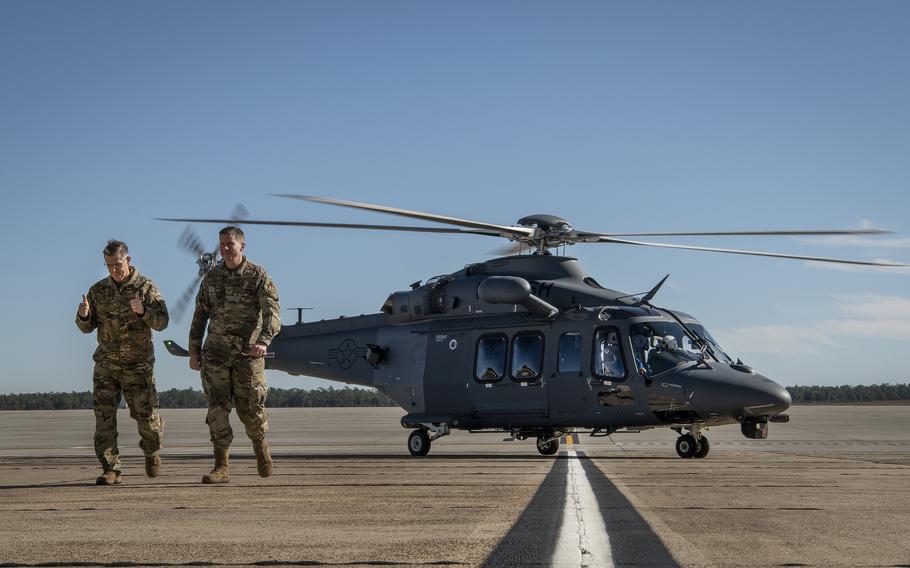 Gen. Timothy Ray gives a thumbs up after disembarking from his first ride in the MH-139A Grey Wolf with Col. Michael Jiru. The Grey Wolf was unveiled and named during the ceremony at Eglin Air Force Base, Fla., on Dec. 19, 2019. (Samuel King Jr./U.S. Air Force)

These military versions of aircraft first developed for civilian and police use have been cleared for flying by the Federal Aviation Administration, the companies said last week. That’s four years after they were ordered by the Air Force in a contract for up to 84 helicopters, worth more than $2 billion.

And it’s about 20 months after the Air Force received its first sample of the new model, according to Air Force spokesman Aaron Nation. Testing is expected to continue through 2024.

The helicopters were assembled from parts sourced in the United States and other countries at Leonardo’s plant at Northeast Philadelphia Airport. Pilots then flew them to the riverside concrete landing pad next to Boeing’s facility in Delaware County, where Ridley Creek meets the Delaware River, to add armaments, seating and other final equipment, before later heading to Florida.

The collaboration is among the jobs that have helped keep the Boeing plant busy despite a slowdown in U.S. military upgrades of the Chinook CH-47 heavy-lift helicopter, which have been made at Boeing’s plant and adjacent engineering center since it was opened during the Vietnam War. Boeing has also logged more orders for Chinooks from U.S. allies such as Germany.

Based on a civilian model helicopter

The Grey Wolf is based on Leonardo’s AW139 civilian model; more than 1,200 are in use, some by the New Jersey State Police. Using widely available parts from these familiar aircraft, instead of special components for a new military design, provides “the lowest and best lifecycle cost for the Air Force,” according to Azeem Khan, program director at Boeing.

Boeing, which employs more than 4,000 at Ridley, and Leonardo, which employs around 900 in Northeast Philadelphia, are “very complementary,” Woltman added in an interview. “We make these commercial aircraft that are logistically mature, and Boeing knows very well how to configure them for demanding operations” for U.S. forces.

The Leonardo assembly plant has added more than 300 jobs over the past three years. Woltman says it has been expanding in anticipation of military contracts and in response to new orders from police, fire and emergency service units and from energy companies and other business users.

The company plans to continue hiring in Philadelphia, he said. “For Leonardo, the United States is a growth market. We’re looking for highly skilled people, and people who want to learn.”

Woltman added that the company also has been recruiting U.S. suppliers.

Philadelphia is a historic center of the U.S. helicopter industry, developed by pioneers including Penn-trained engineer Frank Piasecki, his family and business partners, since the start of World War II. Besides Boeing and Leonardo (formerly AgustaWestland), the area had Sikorsky’s smaller civilian helicopter facility near Coatesville, closed by owner LockheedMartin last year after it suffered a drop in energy company orders.

“Leonardo has been steadily adding staff across all units over the last few years, even throughout the pandemic, as our order-intake remains strong,” said company spokesman Michael Cooper.

The Air Force is well known for its fixed-wing fighter, bomber, transport and pilot-less aircraft; helicopters are more closely identified with the Army and Marine Corps, which use them to transport troops and equipment or to attack enemy troops.

But the Air Force also has uses for helicopters, for example, to defend nuclear missile launch sites and to ferry generals, Congress members and other VIPs and airmen around its bases. The service has been using a fleet of aging Bell Huey UH-1N helicopters for that work.

Mark Cherry, vice president and general manager of Boeing’s Ridley plant, said the Air Force chose to replace those with Grey Wolf because it is faster, has a longer range, and can lift and fit more than the Huey.

In a report earlier this year, the U.S. Government’s General Accountability Office said the Grey Wolf had fallen behind schedule after Boeing underestimated how much new design work it would have to do. For example, it had to reconfigure space for military “friend-or-foe” aircraft identification systems that could not easily fit into the existing civilian aircraft.

During the Trump administration, the Pentagon sought to stop or slow upgrades of older systems such as Boeing’s Chinook, which have been used in the U.S. wars in countries such as Iraq and Afghanistan, and focus instead on long-range artillery, digital warfare, and other weapons for threatened conflicts with Russia and China.

But area Congress members have pushed to continue the upgrades, conscious that Boeing is the largest single manufacturing employer remaining in the Philadelphia area.

Staff at the facility also makes Ospreys, whose tilt-rotor design, which allows it to fly between small landing areas like a helicopter, has made it popular among Marine Corps leaders. Both Chinooks and Ospreys are also used by U.S.-allied forces in other countries.

Cherry and other Boeing officials know there’s a lot at stake in showing they can add new aircraft lines and work closely with other manufacturers: They would like to see the Philadelphia plant used to construct the military’s next-generation Defiant helicopters, with two equal-sized rotors spinning in opposite directions.