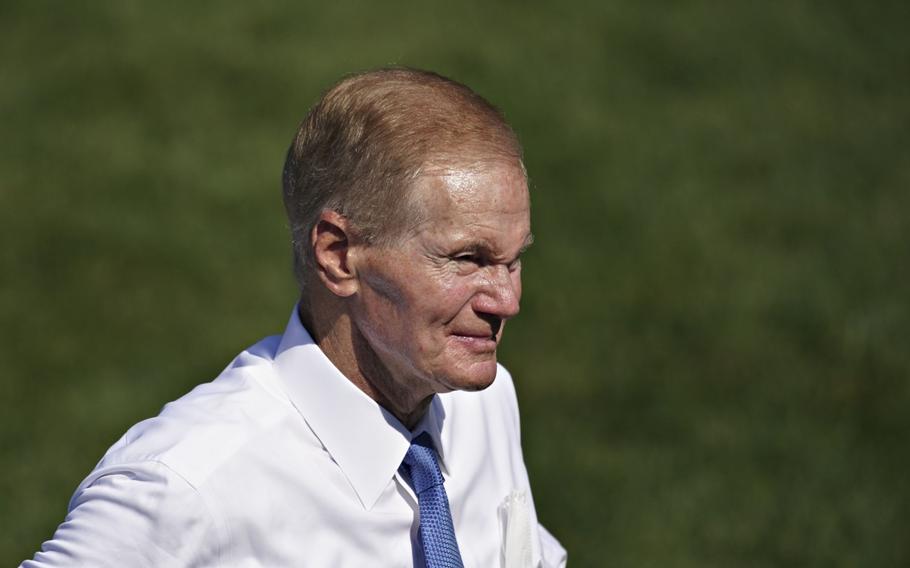 Bill Nelson, administrator of the National Aeronautics and Space Administration, on the South Lawn of the White House in Washington, D.C., on Aug. 9, 2022. (Al Drago/Bloomberg)

The delay of NASA’s first major mission to return to the moon in half a century comes at a sensitive time for the U.S. space agency, as it’s embroiled in a war of words with its main rival in the race to the moon: China.

Minutes after the Artemis I launch was postponed Monday due to engine troubles, China’s main state-backed tabloid, the Global Times, hit out at NASA Administrator Bill Nelson. In an interview with NBC that aired Aug. 28, Nelson criticized China’s approach to space, saying the country was secretive and not open to cooperation. Nelson also repeated an accusation he made in May during a congressional hearing that the Chinese space program was built on stolen technology. “They’ve gotten a lot of the technology from everybody else and as a result they are very good,” he said.

The Global Times called the comments “inflammatory,” “full of smears” and “totally ill-intentioned.”

The rhetoric underscores how heated what’s being called the new space race has become for the two countries. Both are spending billions of dollars to put humans back on the moon -- and more crucially -- gain access to resources that could foster life on the lunar surface or send spacecraft to Mars.

This week’s sparring isn’t the first time the two sides have hit out at each other. In July, when part of a massive Chinese rocket fell back to Earth in an uncontrolled entry and posed a potential debris-impact risk, Nelson chided Beijing for not sharing specific trajectory information. China has dismissed such Western concerns and called them a smear effort.

While the China National Space Administration is typically silent, other officials have poured on the vitriol. Foreign Ministry spokesman Zhao Lijian last month said the NASA boss was willing to “lie through his teeth” in order to attack Beijing. Global Times said Monday that Nelson smeared China for “trying to take over the moon” and in July, termed similar comments by him as “hypocritically” hyped and “colonial-minded.”

Nelson isn’t the only member of the Biden administration criticizing China’s space program. In a new report on Aug. 24, officials affiliated with the Defense Department warned of China’s “hegemonic ambitions” beyond Earth.

The State of the Space Industrial Base report, released by the Defense Innovation Unit, the U.S. Space Force and the Air Force Research Laboratory, said Beijing wants to build solar power stations, industrialize the moon and mine resources on asteroids.

China also wants to convince other countries to support its efforts to establish rules governing space, according to the report’s authors.

“They are using their space competencies to lure and lock in partners to their infrastructure, standards and governance systems,” the report said. “Were China to win this race to industrialize the economic zone of space and secure its governance through leadership and might, it would have vast consequences for the security of the U.S. and its allies.”

While Nelson has accused China of non-cooperation in space, a U.S. law also makes any outreach very difficult. Beginning in 2011, the U.S. has strictly limited cooperation between NASA with its counterparts in China, which has said it is willing to work with others to “promote peaceful use of outer space.”

An immediate point of conflict is the moon because scientists think the lunar South Pole is the best place to find water. So it’s not surprising that both the U.S. and China are targeting that part of Earth’s satellite for exploration, said Cassandra Steer, deputy director and mission specialist with the Australian National University Institute for Space.

“There’s no doubt that a new kind of space race is on,” Steer said. “Whoever gets the best landing sites should be able to extract resources to support long-term human habitation.”

NASA said Monday that Sept. 2 is the earliest date “in play” for a rescheduled launch after the delay of the uncrewed Artemis I mission dealt a temporary setback to its program. For Artemis III, which will be the first to carry astronauts back to the moon since the Apollo program ended in 1972, all of the 13 potential landing sites are near the lunar South Pole, NASA announced on Aug. 19.

For now, it’s the U.S. that’s having success promoting its space agenda.

France on June 7 and Saudi Arabia on July 14 signed the Artemis Accords, the Washington-backed agreement laying out principles for regulating activity on the moon and other parts of space. There are now 21 countries that have signed since the U.S. introduced them in 2020.

“Outer space is not a wrestling ground among countries, but an important field for cooperation for mutual benefits,” Foreign Ministry spokesman Zhao told reporters at a regular press briefing in Beijing Monday.

Bloomberg’s Colum Murphy and Jing Li contributed to this report.