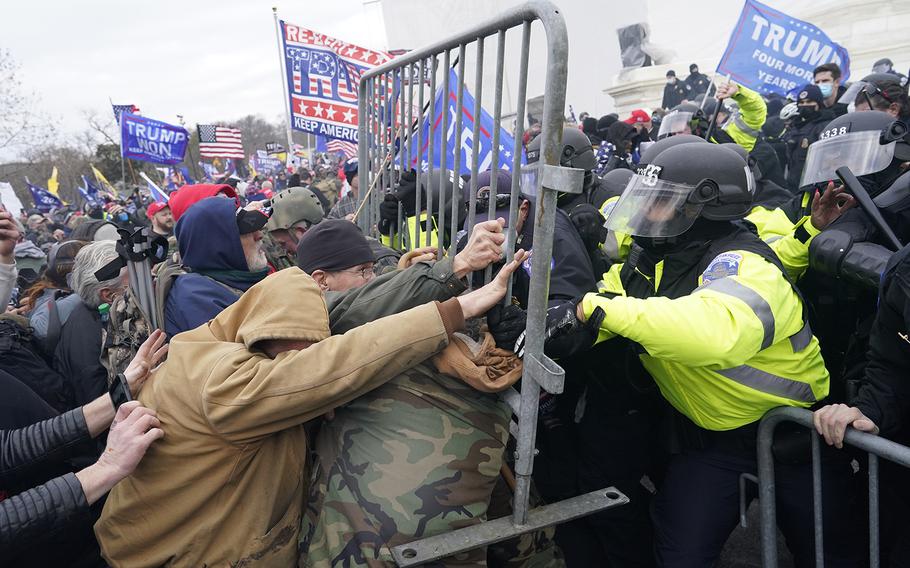 Rioters try to force their way through a police barricade in front of the U.S. Capitol on Jan. 6, 2021. (Kent Nishimura/Los Angeles Times/TNS)

(Tribune News Service) — More than 2 in 5 Americans say a U.S. civil war is at least somewhat likely in the next decade, highlighting the deepening political divisions in the country heading into the midterms.

A recent poll by YouGov and The Economist found that 43% believe a civil war was either "very" or "somewhat likely." People who identified as "strong Republicans" were the most likely to anticipate a conflict. One in 3 of total respondents said it's not very or at all likely, and 22% are unsure.

"Polarization right now is at the highest level in decades, if not going all the way back to the civil war," Thomas Gift, director of the University College London's Center on U.S. Politics said in an interview. But he urged caution interpreting the data; he noted this type of conflict doesn't typically break out in wealthy, democratic countries and it's unclear what respondents imagine when they think of a "civil war."

The survey, conducted among 1,500 U.S. adults, also found that two-thirds of Americans — 66% — believe political divisions have gotten worse since the beginning of 2021. In comparison, only 8% said the United States has grown less divided.

Most respondents also said they expected more political violence in the coming years, with Republicans more likely than Democrats to hold that opinion.

The FBI's search of Mar-a-Lago has fanned the political flames. On Sunday, Sen. Lindsey Graham told Fox News there would "be riots in the streets" if former President Donald Trump is prosecuted for his handling of classified documents retrieved at his Florida home.

Political violence amounts to about 1% of all violence in the U.S. despite perceptions that it is more pronounced, according to Gift.