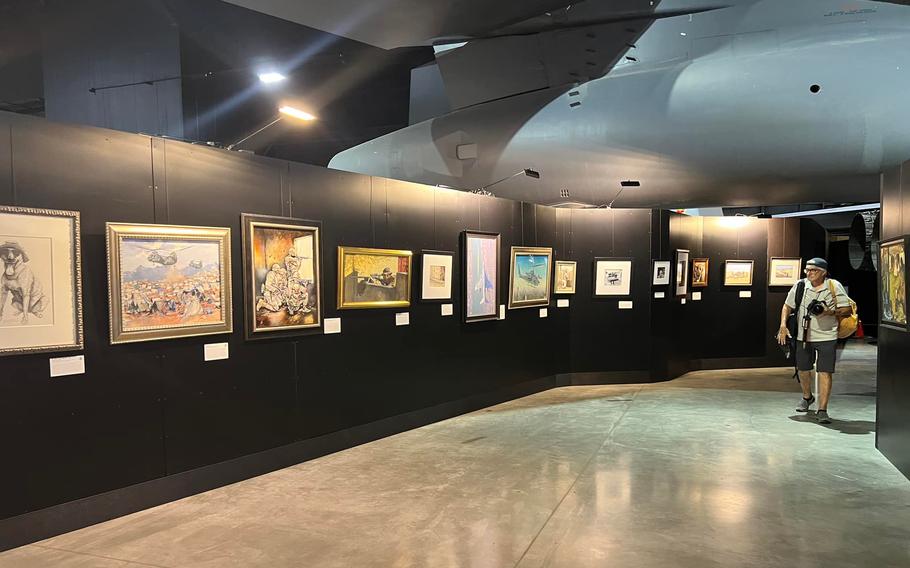 (Tribune News Service) — Keith McConnell admits he’d never heard of “combat art” until he’d completed Officer Candidate School and was training as a junior officer in the Marines. When he began noticing art in the buildings, he decided to inquire about it. He’d loved drawing ever since he was a first grader growing up in Lorain, Ohio.

“I remember drawing wagon trains, cowboys, battleships and war scenes,” says McConnell, who now lives in Port Ludlow, Washington. ““The teacher told my mom I should be an artist.” He headed for Ohio University where he studied art and planned to become an illustrator. When he was drafted in 1967, he joined the Marines and happily discovered he could apply to become a combat artist.

“It’s someone who draws and paints what he sees in a combat zone or even in training,” McConnell explains. “It’s record-keeping. I could go with the air wing or infantry, take photos and sketches and then go back to the studio and finish the artwork.”

Over the years McConnell’s subject matter ranged from Vietnam refugees at Camp Pendleton to Panama Canal Zone jungle warfare training exercises. Assignments took him to the 1994 L.A. Olympics and the Statue of Liberty Bicentennial Celebration. He served as a combat artist in Desert Storm in 1991 and created a series of Toys for Tots posters over the years, including the one you’ll recognize as the official poster for the annual drive.

After retiring from the Marine Corps in 1991, McConnell became an illustrator whose creations range from record album covers for the Beach Boys and promotional art for the Beatles to editorial magazine illustrations and children’s books. He was a courtroom artist for ABC and CBS-TV.

His years with the Marines were invaluable. “My experiences as a combat artist taught me self-discipline and flexibility,” he says. “I learned how to work fast.”

Although the artwork on display focuses on Marines, curator Lin Ezell says the intimate scenes captured by the artists could just as well reflect anyone wearing a uniform and engaged in military service. “You wait for a ride, you wash your socks, you stand in line for chow, you look for the enemy,” says Ezell, former director of the museum.

“Marine Corps art is up close and personal. It is about the individual Marine-in combat, during training, or while delivering assistance during times of great need. This art helps us better appreciate those who have worn the uniform and those who continue to serve today.”

One of the most touching paintings is titled “Missing Him.” It pictures a young girl and her dog looking out a window. There’s a Marine Corp flag hanging on the front porch and a Gold Star service flag in the window.

The artist is Charlie Grow, a retired marine and former combat artist who says he’s a “very visual person who likes storytelling.” In this case, the story was personal. “That painting is in memory of my son-in-law,” he explains. “It’s my granddaughter who is standing at the front door of the house..”

The exhibition consists of 36 works of art divided into three sections.

“Every Clime and Place” shows Marines conducting training and engaging with the enemy in a variety of settings and situations around the globe. Marines provided humanitarian relief assistance in Somalia, Haiti, the Philippines, Bangladesh, and other locales struck by natural disasters, famine, and war.

“No Better Friend, No Worse Enemy” presents Marines demonstrating their prowess on fields of battle and during times of great emergency. They experienced the destruction and devastation of battle, mourned the loss of their friends, and fought to survive and to overcome the enemy.

“The Price” reflects the cost of service paid for by Marines and their loved ones. Catastrophic wounds to both body and mind, as well as graveside services, are reminders of the price that has been paid.

Much of the artwork that’s now in Dayton comes from the collection at the National Museum of the Marine Corps and originally hung in the museum art gallery. It all began during World War II, when Marines with artistic talent were identified to serve as combat artists. In 1966, General Wallace Greene, Commandant of the Marine Corps, directed Colonel Raymond Henri, USMCR, to establish a combat art program and select Marines and civilians to go to Vietnam to record their experiences. It was from this body of works that the museum’s collection was originally established. The collection now consists of 9,000 pieces of art.

The paintings, drawings, and sculptures exhibited are by artists who include active duty Marines, Marine reservists, retired Marines who remain committed to the Corps and country and talented civilians. The Marine artists range in rank from corporals to colonels. They have created landscapes, portraits, snapshots of training and combat, and sensitive portrayals of devastating loss. The sum of these pieces is a story about today’s Marines.

If you visit the museum located at Marine Corps Base Quantico in Virginia, you’re likely to encounter artist-in-residence Kris Battles, who not only creates art in the gallery but is also responsible for screening applicants who wish to become combat artists. “You have to be fast and you have to be accurate,” he says, adding that both Marines and civilians are welcome to submit a portfolio.

Dayton is the fourth stop for the traveling exhibit which is sponsored by the Marine Corps Heritage Foundation.

The museum is open every day except Christmas, from 9 a.m. to 5 p.m. Admission and parking are free and the exhibits are appropriate for all ages. For more information, visit www.usmcmuseum.com.