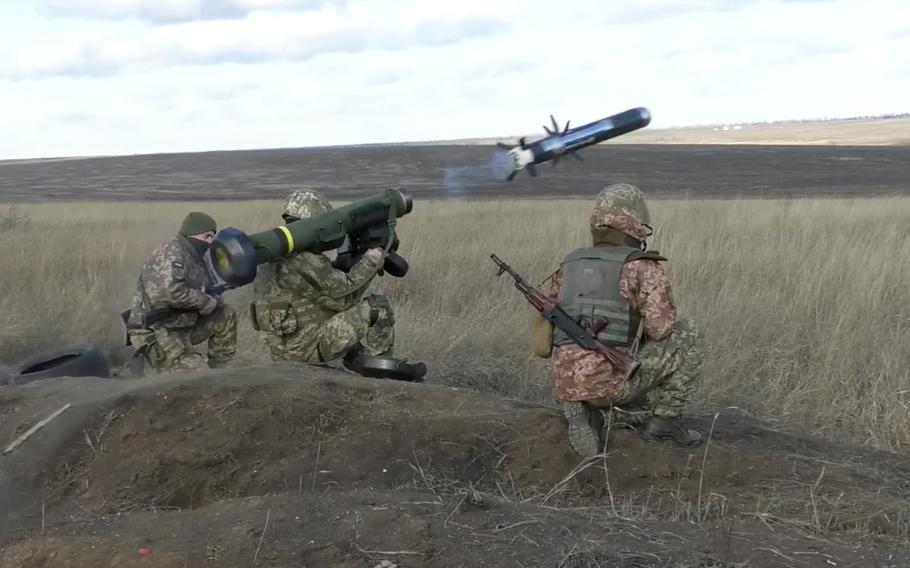 In this image taken from footage provided by the Ukrainian Defense Ministry Press Service, a Ukrainian soldiers use a launcher with US Javelin missiles during military exercises in Donetsk region, Ukraine, Wednesday, Jan. 12, 2022. The Russian invasion of Ukraine is the largest conflict that Europe has seen since World War II, with Russia conducting a multi-pronged offensive across the country. The Russian military has pummeled wide areas in Ukraine with air strikes and has conducted massive rocket and artillery bombardment resulting in massive casualties. ( Ukrainian Defense Ministry Press Service/AP)

The two-year contract will fund production of the National Advanced Surface-to-Air Missile System (NASAMS), which is jointly developed and produced by Raytheon and Norway's Kongsberg Defence & Aerospace.

Raytheon, the Tucson area's biggest employer with more than 13,000 workers, has previously won millions of dollars in U.S contracts to replenish weapons from the nation's arsenal sent to Ukraine. Those include the Javelin anti-tank missile system, made by a Raytheon-Lockheed Martin joint venture, and Stinger portable air-defense missiles.

According to a Pentagon contract notice, the contract will be funded from the fiscal 2022 Ukraine Security Assistance Initiative, which includes a $3 billion round of funding announced Aug. 24.

Among other things, that funding provides for six NASAMS, with an undisclosed number of missiles, to add to two NASAMS previously provided to Ukraine from the U.S. arsenal.

The United States has committed more than $13.5 billion in security assistance to Ukraine since January 2021, the Pentagon said.

Designed to defend against drones, fixed-wing aircraft, helicopters and cruise missiles, the NASAMS has a range of about 18 to 30 miles depending on the missile version used. It uses Raytheon's Sentinel radar and a version of Raytheon's Advanced Medium Range Air-to-Air Missile, which is made in Tucson, along with a Kongsberg command and control system.

The system has been fielded by the U.S., where a battery protects the National Capital Region of Washington, D.C., as well as by a dozen allied nations including Norway.