Pa. man who beat officer with a Trump flag at Jan. 6 riot sentenced to nearly 4 years 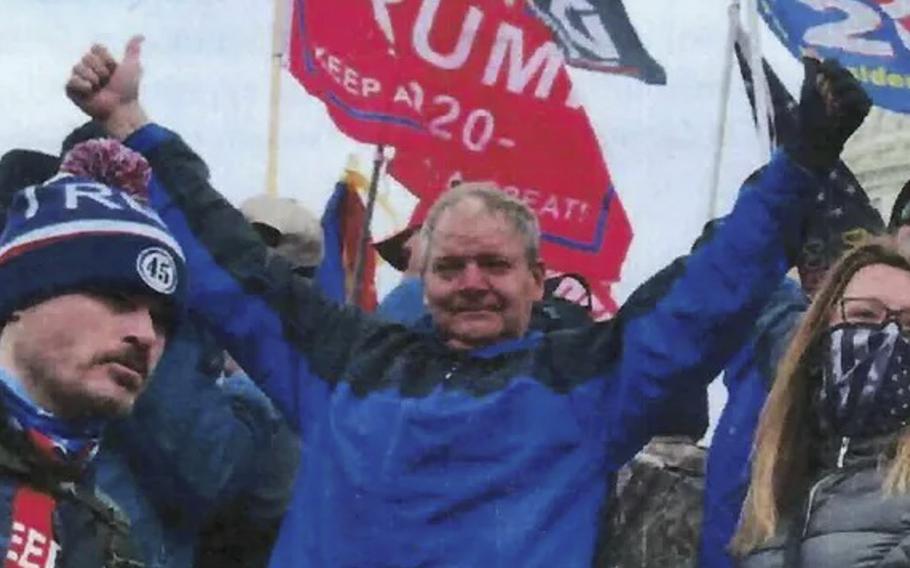 Howard Richardson at the Jan. 6 riot in Washington, D.C., according to charging documents. (Department of Justice/TNS)

PHILADELPHIA (Tribune News Service) — A Montgomery County man who beat a Washington, D.C., police officer with a Trump flag during the Capitol riot was sentenced to nearly four years in federal prison Friday — one of the harshest punishments imposed so far for a person accused in the Jan. 6 attack.

Howard Richardson, 72, of King of Prussia, apologized to the court during a sentencing hearing in Washington saying "there's no excuse" for his behavior that day. Still, he stressed that the officer involved hadn't been seriously hurt and pleaded with the court for mercy.

"I'm a good citizen," he told U.S. District Judge Colleen Kollar-Kotelly during a hearing in Washington. "I've been a good neighbor. … I went down (to Washington) as a patriotic citizen to celebrate. I allowed myself to be dragged into this mob mentality.

He noted he is a Vietnam veteran and that his son has been a police officer for nearly two decades. But Kollar-Kotelly said that, if anything, Richardson's military service and his family ties to police should have made him even more keenly aware that his actions that day were indefensible.

"Violence is an unacceptable way of resolving political differences," she said. "Your presence and actions in joining other insurrectionists was an inexcusable attack on our democracy. … You should appreciate what an extraordinary country you live in."

The 46-month prison term Kollar-Kotelly handed down Friday is the longest yet imposed against the 21 Pennsylvania defendants who have been sentenced so far for playing a role in the Capitol attack, which caused millions of dollars in damage, injured scores of officers, and threatened the peaceful transition of power.

More than 70 people from the state have been charged to date, most with misdemeanors for illegally entering the Capitol building. Trials for those facing more serious charges — like assaulting police officers or planning the attack that day — remain pending.

Unlike many of those charged, Richardson never entered the building. But prosecutors said Friday his attack on a Washington D.C. police officer outside the building set his case apart and made him a candidate for a lengthy prison term.

Body camera footage from several officers showed Richardson — sporting a "Brigantine Beach" windbreaker and a red baseball cap — at the front of a mob that had burst through police barricades on the Capitol's west plaza.

He approached a police officer in riot gear, yelled "Here it comes!" and bashed the officer three times with the metal flagpole he was carrying. He only stopped swinging after the flagpole broke in two.

Though Richardson pleaded guilty to charges of assaulting an officer earlier this year, Assistant U.S. Attorney Emily W. Allen noted that he has continued to try to minimize his actions — first saying he acted in self-defense after the officer struck him with a baton and later saying he lost his temper after the officers mistakenly accused him of being part of a group that used a metal billboard to break through police lines.

Both stories, Allen noted, were later proven false by the video evidence.

"Mr. Richardson was front and center," she said. "There is no way looking at that video to see it as him protecting himself.

What's more, she added, at the time of the riot, Richardson was out on bail for two earlier cases in Montgomery County — one for carrying a firearm without a license, and another stemming from an incident in which he attacked a motorcyclist outside his home just months before the Capitol attack.

Richardson's attorney, Thomas C. Egan III, who also represents him in those cases, maintained that the attack on the motorcyclist was not what prosecutors had made it out to be and that in that situation, too, his client was acting in self-defense.

He painted Richardson as a valued member of his community who frequently volunteers as a poll watcher and judge of elections and who had built a successful pest-control business in Montgomery County.

"He didn't go there with the intention of hurting anybody," Egan said. "He was an elderly man who went there as a President (Donald) Trump supporter who believed right or wrong that the election had been taken from him."

Kollar-Kotelly didn't buy it and again noted that his previous work in elections should have given him a better understanding than most people of how democracy works.

"He went from helping his fellow citizens exercise one of the fundamental rights of democracy to attacking the ideals of democracy by his criminal actions on Jan. 6," she said.

In addition to his prison term, Richardson was ordered to serve three years under court supervision after his release and to pay $2,000 in restitution.