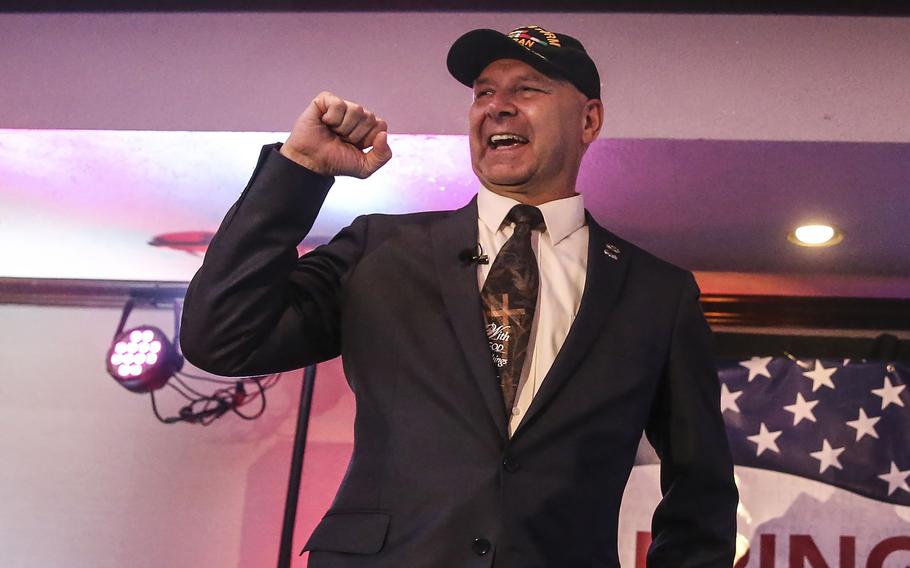 Pennsylvania State Sen. Doug Mastriano celebrates his victory in the Republican primary for governor in Chambersburg. Mastriano, appeared during his time on the faculty of the Army War College in an official photograph while wearing a Civil War Confederate Army uniform. (Steven M. Falk/The Philadelphia Inquirer)

PHILADELPHIA — State Sen. Doug Mastriano, the Republican nominee for governor in Pennsylvania, appeared during his time on the faculty of the Army War College in an official photograph while wearing a Civil War Confederate Army uniform.

That photograph, first reported Friday night by Reuters, was recently removed from the college’s campus in Carlisle after the news service asked about it.

Mastriano’s campaign did not immediately respond to a request for comment. He rarely engages with reporters covering his campaign.

“Media MELT DOWN that Mastriano apparently once posed as a civil war historical figure for a photo. And? He has a Ph.D in HISTORY. The left wants to erase history. Doug Mastriano wants us to learn from it,” Ellis tweeted.

Mastriano, who won a nine-candidate bruising primary in May, has attempted to moderate his firebrand conservative tone for November’s general election. But he has a long digital and paper trail of making controversial statements that come back to haunt his campaign.

State Attorney General Josh Shapiro, the Democratic nominee for governor, quickly circulated the Reuters story, noting it came “after Mastriano has spent weeks refusing to condemn the same antisemites and white nationalists he paid thousands of dollar to recruit on Gab — just the latest example of his campaign’s close association with violent extremists.”

Mastriano paid the controversial social media site Gab $5,000 for consulting in April and praised the site’s founder, Andrew Torba, for his efforts. Mastriano later deleted his profile from the site and said Torba, a Christian Nationalist known for antisemitic remarks, did not speak for his campaign.

Mastriano served for three decades in the U.S. Army, retiring in 2017 as a colonel after serving in Europe, Iraq, and Afghanistan. Reuters reported that Army War College faculty from the Department of Military Strategy, Plans, and Operations were given the option to wear historical military garb in the 2013-2014 faculty portrait.

Most of the 19 men and two women in the photograph wore contemporary military uniforms or civilian clothes. Mastriano wore the distinctive gray uniform of the Confederate Army, with a pouch for ammunition, while holding what appears to be a rifled musket.

The Army War College told Reuters a team in 2020 reviewed all of the art, photographs, and other images on campus but did not notice that Mastriano was wearing Confederate garb and left the portrait in place with other faculty photos until this week.

“This faculty photo did not get the team’s attention; the photo has since been removed because it does not meet AWC values,” the college said in a statement.

Mastriano represents a central Pennsylvania Senate district that includes Gettysburg, the location of the Civil War’s bloodiest battle, a decisive Union Army win over the Confederate Army in 1863. Pennsylvania was in the Union during the war.

Mastriano introduced legislation in 2020 that would have required the state Attorney General’s Office to prioritize the prosecution of vandalism of historical monuments, at a time when statues and monuments celebrating the Confederacy across the country were being removed from public spaces and vandalized.

That bill, which did not advance out of committee, would have withheld state funding from cities that did not protect monuments from vandalism and stiffened penalties for vandals in such cases.