Energy prices are rising again. Here’s what to expect in another costly winter heating season 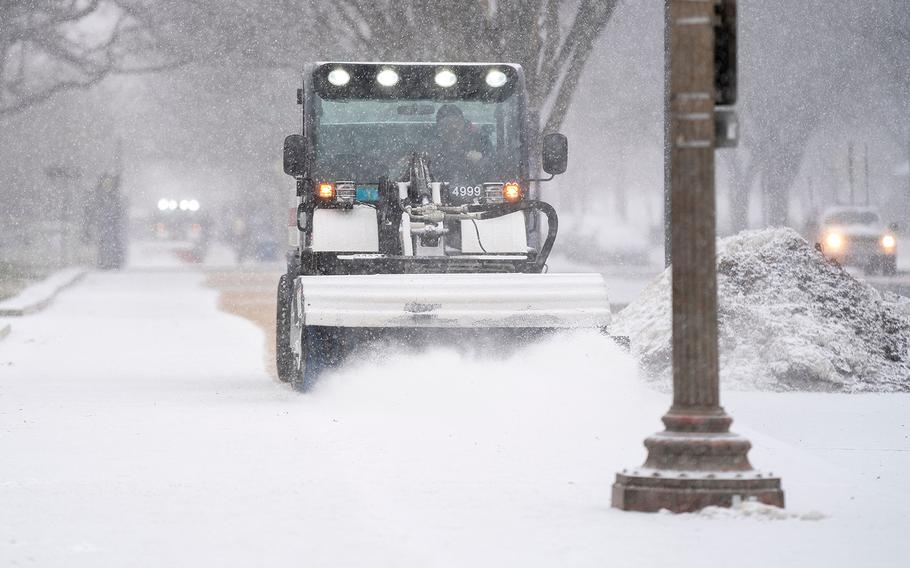 A snow sweeper clears sidewalks near the National Mall in Washington, DC, during a winter storm on Jan. 16, 2022. (Stefani Reynolds/AFP via Getty Images/TNS)

(Tribune News Service) — The cost of natural gas and heating oil is climbing again, likely to cause more financial pain this winter for consumers already struggling to pay for food, clothing and other items.

On Monday, natural gas futures for delivery in November, December and January each traded for more than $10 per million British thermal units, the highest since 2008 before shale drilling expanded supplies of natural gas and reduced prices.

“We’re going into this winter on a tighter, more expensive market basis than we’ve seen in quite a while,” said Dan Dolan, president of the New England Power Generators Association.

Natural gas prices that fell during the pandemic and increased as the economy reopened surged following Russia’s invasion of Ukraine in February. “It caused earthquakes across the world,” he said.

Natural gas accounted for 53% of electricity generated in New England in 2021, according to ISO-New England, the region’s grid operator. Nuclear energy, at 27%, is a distant second.

As natural gas becomes costlier, other sources of energy, such as oil that’s rising less dramatically in price, will be used, he said. It’s a dirtier fuel and will throw states off their greenhouse gas emissions targets, Dolan said.

In addition, natural gas storage is down, according to the U.S. Energy Information Administration, implying less supply headed into winter and higher prices.

Eversource’s residential supply rate will rise to $1.07 per hundred cubic feet in September from about 77 cents now, an increase of about 39%. An average bill would rise by $6.23 over August, when less natural gas is typically used than in winter.

“The USA is not immune from these effects,” he said in an email.

Hot weather and a drought in the West have driven up natural gas consumption for power generation.

“When natural gas prices get high enough, as they are in Europe, utilities and industrial customers look for replacement fuel sources, oil being one of them,” he said.

The punishing prices would be the second blow to consumers in as many years. Winter energy prices jumped in 2021, even before Russian launched its attack on Ukraine in February.

Home heating oil customers faced sticker shock last spring at the end of the heating season. The retail price of heating oil, according to the Energy Information Administration, was about $1.91 a gallon in May 2020 during the worst of the pandemic when energy prices fell steeply as demand dropped.

This past May heating oil peaked at $5.97 a gallon and is projected to decline to a still-elevated $4.42 a gallon by December, according to the EIA.

Christian A. Herb, president of the Connecticut Energy Marketers Association, which represents home heating oil businesses, said the “general feeling by most retailers now is very uncertain, very concerned about what the winter holds.”

The industry worries about a hurricane or other extreme weather that would disrupt energy markets and put more pressure on prices, he said.

Europe used to be a secondary supplier of energy to plug gaps in U.S. markets. That ended with the war in Ukraine and increased demand by Germany and other nations for energy to replace natural gas from Russia, Herb said.

Rising prices to deliver oil to customers are adding to the problems of home heating businesses. The price of diesel gas used for trucks has shot up and a shortage of truck drivers has bid up wages, he said.

“It’s putting a lot of additional pressure on the dealer just to get the fuel to the consumer,” Herb said.