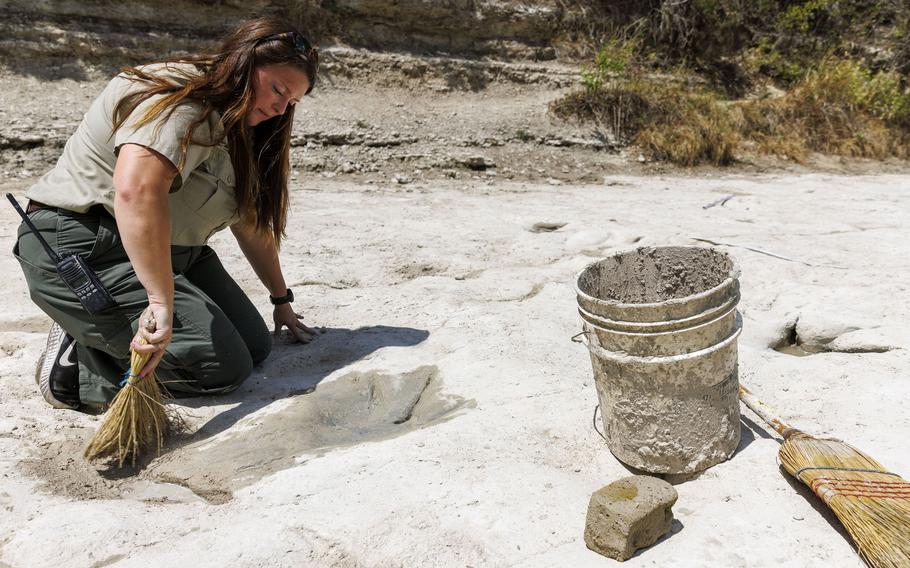 Park operations trainee Carolanne Brannon demonstrates how they clean the tracks in the Paluxy River so that they can be mapped at Dinosaur Valley State Park in Glen Rose, Texas, on Aug. 19, 2022. The recent drought lowered the level of the river and exposed dozens of tracks that were previously underwater. (Elías Valverde II/The Dallas Morning News/TNS)

GLEN ROSE, Texas (Tribune News Service) — As he methodically walks the rugged limestone terrain with nothing more than a meter stick, Glen Kuban talks fast, delving out millenniums of history in a matter of minutes.

The rain is coming, he says. This is a race against time.

“We have a rare opportunity now to observe tracks that are usually under mud and water,” Kuban, a dinosaur track researcher, told The Dallas Morning News on a sweltering summer day in Dinosaur Valley State Park, about 80 miles southwest of Dallas.

That opportunity was created by this year’s record-breaking drought. As heat waves kept temperatures in the triple digits for weeks, and a rain-free streak spanned more than two months, the U.S. Drought Monitor said Somervell County, where the park sits, was experiencing “exceptional” drought — the most severe classification. In a silver lining of sorts, most of the park’s riverbeds dried out, bringing at least 45 never-before-seen tracks to light.

With showers in the forecast, park staff only had a matter of days to clean, map and study the tracks before they were recovered in mud, silt and water.

But that’s far from where the story started — 113 million years ago to be exact — so Kuban takes a breath, and starts from the beginning.

From ocean to river

During the Cretaceous Age, dinosaurs left tracks in the soft mud of a shallow sea that once covered central Texas.

According to Kuban, the Glen Rose area was home to a coast, complete with beaches, lagoons, coral reefs, and large tropical palm and conifer trees that lined the shore. The shells of crustaceans created the layers of mud and sediment that covered and preserved the prints in what is now known as the Paluxy River.

It was just over 100 years ago that the river, one of the fastest-flowing rivers in the state, began to peel those layers away, exposing tracks through erosion, Kuban said.

In 1909, the first tracks were discovered in the area, belonging to a three-toed theropod. In the late 1930s, fossil hunter Roland T. Bird dug out large sections of the riverbed, and found not only more theropod tracks, but some belonging to sauropods. Those tracks were the first to prove sauropods walked on land.

Bird’s discovery changed the field of paleontology, so much so, the National Park Service designated the park a National Natural Landmark.

Twenty of the newly discovered tracks came from what the park calls the “Lone Ranger trackway.” They belonged to one Acrocanthosaurus, which walked the trail for roughly 100 feet, leaving behind an estimated 140 tracks.

An Acrocanthosaurus was a kind of therapod, a three-toed dinosaur that stood at about 15 feet tall and weighed up to 7 tons.

In the Paluxy riverbed, which houses 25 of the newly discovered tracks, prints from both therapods and sauropods — more specifically, Sauroposeidons proteles — were found. With a long neck, Sauroposeidon proteles stood at about 60 feet tall, and could weigh more than 40 tons when fully grown.

Sauropod tracks aren’t as easily defined as therapods, and often look like holes, but according to Kuban, the sauropod tracks in Glen Rose are the best in the world.

“Here, every claw is clear as day,” he said.

In between tracks, Kuban points out a series of lines, marks and crevices he can’t quite explain, but he always has a theory.

Two long gashes not in line with any other tracks could be two claw marks, where a dinosaur was floating in the water and reached down for something to eat.

That pit over there? Kuban thinks a dinosaur slipped, leaving behind a “rare footslide mark.”

At one point, one set of tracks ends abruptly before another, and Kuban thinks it’s the moment one dinosaur ate another, frozen in time.

Dinosaur tracks “are quite a bit more common” than dinosaur bones, Kuban said, though much of the early research done by paleontologists focused on bones.

“I think (tracks are) fascinating because you can learn so much from the tracks you can’t learn from the bones, like how they walked, interacted and all kinds of behavioral things,” Kuban said.

For example, the park’s trackways show sauropods traveled in herds, and the distances between the tracks have helped researchers across the globe better understand how fast dinosaurs could travel.

By researching bones, paleontologists concluded dinosaurs could only run 10 or 15 miles per hour. Kuban noted paleontologist Robert Bakker was ridiculed for hypothesizing some species could run up to twice that.

“We have found direct evidence in a running trail in the park that they could run 30 miles per hour in soft mud, so imagine what it could do on firm ground,” he said. “Everyone thought Bakker was crazy, but I think he was exactly right.”

‘The river will win’

As weather conditions increasingly become more severe, there is no foolproof way to do it, but the park’s mission remains to not only share the trackways with the world, but to preserve what’s found within them.

“These tracks provide an understanding of where we fall as a species,” Jeff Davis, the park’s superintendent, told The News. “It brings it into reality. You look at these and realize these were not movie monsters, these were animals that walked and lived in this place where I’m standing today.”

They’ve made molds, sent tracks to museums and researched the safest materials to use on the limestone, in hopes of preventing further damage as they clean, but Davis described every effort as a “Band-Aid for the inevitable.” The tracks are slowly eroding.

As Davis stands in the riverbed, a drone hums overhead, archiving what the drought gave them. Soon the rain will return, the clock will run out, and the cycle begins again.

“Everything we do in the river is temporary,” Davis said. “It’s an erosional feature, and eventually the river will win, washing it all away. But with everything it takes, it reveals something else. This will never be a lost cause.”