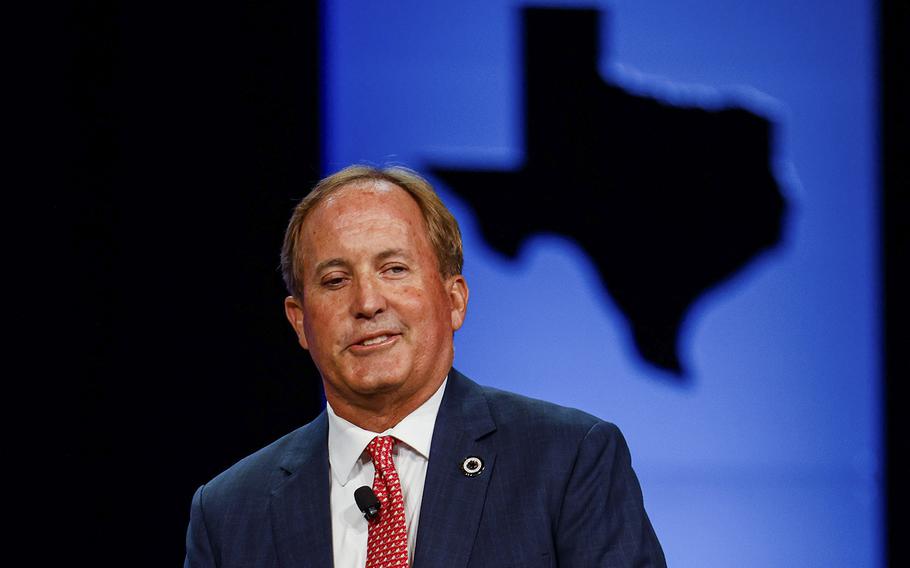 Texas Attorney General Ken Paxton, speaking at the Republican Party of Texas state convention in Houston on June 17, 2022, faces two lawsuits questioning his actions as a lawyer and a boss. Private attorneys from three firms are defending his actions in both cases and have billed more than $500,000 for their work. (Lola Gomez)

AUSTIN, Texas (Tribune News Service) — Private law firms have charged the state more than half a million dollars to defend Texas Attorney General Ken Paxton against lawsuits that question his actions as a lawyer and a boss.

Paxton, a Republican up for reelection in November, is facing allegations that he retaliated against employees who accused him of bribery. A disciplinary committee of the state bar also filed a lawsuit seeking to sanction Paxton for his efforts to overturn the 2020 presidential election.

Instead of relying solely on staff attorneys to handle the cases, Paxton’s agency brought in three private firms that have already billed the state a combined total of $507,000 for their work, according to documents obtained by The Dallas Morning News.

The cases are nowhere near resolution, meaning the expense to taxpayers is expected to grow. In addition to the whistleblower and election suits, Paxton was indicted on fraud charges seven years ago but has not yet faced a jury. Taxpayers also footed the bill for that prosecution.

While an expert said it’s not unusual for attorneys general to rely on private lawyers for these kinds of challenges, he said the sheer volume of Paxton’s legal troubles is unique.

A spokesperson for the attorney general’s office did not answer questions about why or how the outside firms were chosen, but called the two lawsuits “bogus.”

“The Agency will vigorously uphold the law and will muster the resources needed to assist in defending against this meritless litigation,” Patty Ramon said in a statement.

The biggest bill — $463,000 — is from Lewis, Brisbois, Bisgaard & Smith, a firm Paxton’s office brought in to fight a lawsuit filed in November 2020 by ex-aides turned whistleblowers.

The lead attorney, William Helfand, is charging as much as $540 an hour for work that has included reviewing and revising briefs, though much of the information is redacted, according to billing statements obtained through a records request.

Helfand did not respond to a request for comment.

In the lawsuit, four former senior agency employees said they were fired after accusing Paxton of using his office to benefit a campaign donor. They said Paxton helped the donor with legal matters in exchange for a kitchen remodel and a job for a woman with whom the attorney general allegedly had an affair.

The FBI launched an investigation into the statements. No charges have been filed.

Paxton has denied wrongdoing, and in response to the lawsuit has argued that elected officials are not subject to the state’s whistleblower laws.

Paxton’s agency has also contracted with two other firms in late 2021, the Gober Group and West, Webb, Allbritton & Gentry, to help defend the attorney general against the state bar disciplinary action.

The lawsuit accuses Paxton of acting unethically when he asked the U.S. Supreme Court to overturn election results in four swing states that helped deliver Joe Biden the presidency. Paxton has called the bar complaint a politically motivated “witch hunt.”

In the case’s first court hearing Wednesday, his legal team called it an unconstitutional attempt to control the work of the attorney general’s office and pressed for it to be thrown out.

The Gober Group has billed $35,610 as of July for work that includes research and correspondence on the case. An expert represented by the second firm is charging $350 an hour and has billed just more than $9,000.

The expert’s identity is being withheld by the state under confidentiality rules. Agency attorneys are also working the case and billing hours in addition to the private attorneys, records show.

Ramon, Paxton’s spokesperson, accused the individuals behind both suits of waging partisan hit jobs that “threaten the Texas Constitution, the Rule of Law, and the good work that the Office of the Attorney General does on behalf of all Texans.”

It’s not unusual for politicians to use taxpayer money to defend themselves against allegations of misconduct related to their official authority, especially so they can’t be bankrupted by endless lawsuits questioning their judgment, said Paul Nolette, a political science professor at Marquette University who researches attorneys general.

“It doesn’t look great to have the taxpayers footing that bill. But I think you need to have some separation of the person’s financial situation and what they are facing in terms of conduct in office,” he said.

But where Paxton differs, Nolette said, is the breadth and depth of his current legal troubles.

“It’s definitely unusual just in terms of the quantity of lawsuits and complaints that Paxton is facing,” Nolette said. “Paxton really stands alone right now in terms of all this legal trouble.”