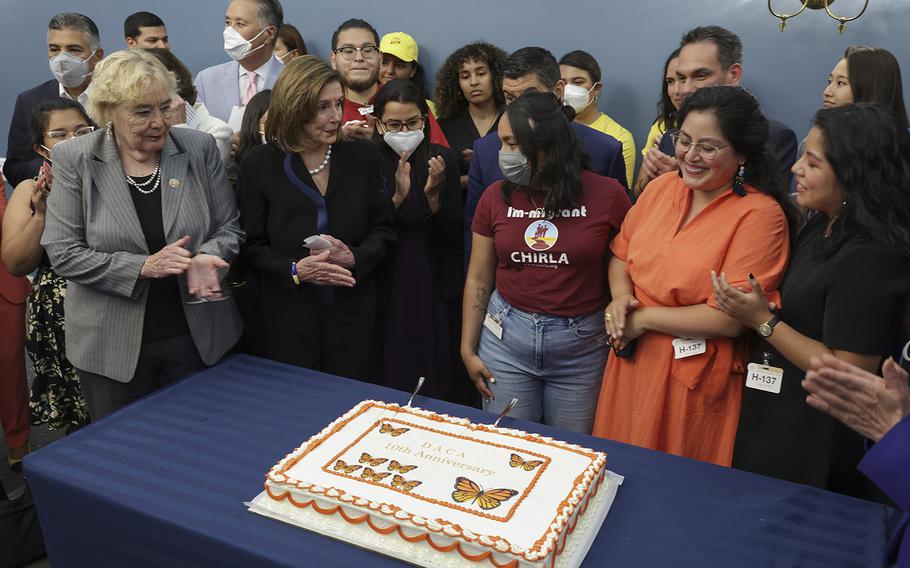 Speaker of the House Nancy Pelosi, D-Calif., second from left, and Rep. Zoe Lofgren, D-Calif., left, join DACA recipients and other lawmakers at an event celebrating the 10th anniversary of DACA, at the U.S. Capitol on June 15, 2022, in Washington, D.C. (Kevin Dietsch/Getty Images/TNS)

WASHINGTON (Tribune News Service) — The Biden administration finalized a rule Wednesday to fortify the Obama-era Deferred Action for Childhood Arrivals program as it faces legal challenges, aiming to preserve protections for hundreds of thousands of “Dreamers.”

The rule, set to go into effect Oct. 31, codifies into federal regulation the 2012 program that shields more than 600,000 undocumented immigrants from deportation and allows them to work legally in the U.S. For the past 10 years, the program has been governed by a Department of Homeland Security memorandum.

“Today, we are taking another step to do everything in our power to preserve and fortify DACA, an extraordinary program that has transformed the lives of so many Dreamers,” Homeland Security Secretary Alejandro Mayorkas said in a news release. “Thanks to DACA, we have been enriched by young people who contribute so much to our communities and our country.”

The final rule unveiled Wednesday is similar to a proposed rule DHS released in 2021. There are some minor changes, such as a clarification that expunged criminal convictions and immigration offenses are not automatic disqualifiers for the program. DHS received 16,361 comments during the rule’s public comment period.

The rule preserves long-standing eligibility requirements for the program. To qualify, immigrants must have arrived in the U.S. by age 16 and before June 2007, must have studied at a U.S. school or served in the military, and must lack a serious criminal record.

The rule also retains the existing process for DACA applicants to seek work authorization and affirms the current policy that DACA is not a form of lawful status but DACA recipients, like other deferred action recipients, are considered “lawfully present.”

The rule could still face a legal challenge, as the original program has for years.

In July 2021, Judge Andrew Hanen of the U.S. District Court for the Southern District of Texas struck down the program, finding that the Department of Homeland Security lacked the authority to implement it.

That ruling allowed existing recipients to apply for renewal but resulted in a block on new DACA applications.

A federal appeals court is currently reviewing that decision. Even with the new rule, DHS cannot grant new DACA requests while Hanen’s ruling is in effect.

Lawmakers have repeatedly failed to enshrine protections for “Dreamers” into law. Late last year, Democrats tried to include legislative protections for undocumented immigrants in a sweeping budget reconciliation package, but the proposal was nixed by the Senate parliamentarian.

In March 2021, the House passed a bill to provide a pathway to citizenship for “Dreamers,” but the Senate has not considered that bill.

President Joe Biden issued a statement on the rule that called on Senate Republicans to vote for the legislation, and called it “the smart thing to do for our economy and our communities.”

“Dreamers are part of the fabric of this nation. They serve on the frontlines of the pandemic response. They are students, entrepreneurs, and small business owners. Many serve bravely in our military. They’ve only ever known America as their home,” Biden said.

Some lawmakers and immigrant advocates hailed the rule’s release but urged legislative action that would protect DACA recipients from further legal challenges.

“This rule cannot provide permanent legal status or fully protect DACA recipients from relentless Republican legal challenges to the program,” Sen. Richard J. Durbin, D-Ill., chairman of the Senate Judiciary Committee, said. “Only Congress can protect them. I urge my Republican colleagues to stop obstructing our efforts to protect Dreamers.”

Mario A. Carrillo, the campaigns director for America’s Voice, said on the group’s Twitter account that other immigrant populations need legislation.

“While the expected DACA rule from DHS is an important effort to try and strengthen protections, the reality is that DACA recipients and the larger population of Dreamers and other long-settled immigrants need a permanent legislative fix,” Carrillo said.