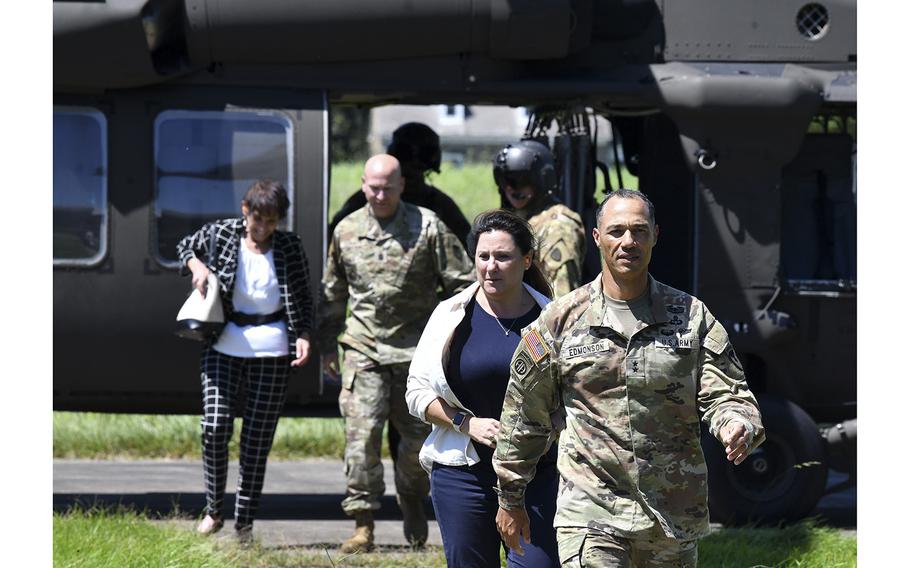 Maj. Gen. Robert Edmonson, front and Maryland Del. Mary Ann Lisanti, center, along with Mary Ann Jernigan, Civilian Aide to the Secretary of the Army for Maryland, back left, and Command Sgt. Maj. Michael Conaty, exit the Maryland National Guard helicopter after landing at Plum Point on Aberdeen Proving Ground following a tour of the installation during an Immersion Day at the post, on August 22, 2022. (Matt Button / The Aegis)

The “windshield tour” of the post included Edgewood Area stops at the Medical Research Institute for Chemical Defense and the Chemical Biological Center; a tech expo display by the Army’s Command, Control, Communications, Computers, Cyber, Intelligence, Surveillance and Reconnaissance Center, which is headquartered at Aberdeen; a Science of Sound demo at the Aberdeen Test Center; a visit to the 20th CBRNE Command, the Army’s Chemical, Biological, Nuclear, Radiological, Explosives headquarters, also based at APG, to hear how the command would respond to a nuclear incident; and a visit to the range where the visitors were able to try their hand at firing some of the weapons being tested there.

The tour allowed dignitaries a look at what’s happening at Aberdeen Proving Ground, the county’s largest employer, and the people who make it happen.

Maj. Gen. Robert Edmonson said that one of APG’s key components is its strong community ties.

“As we come out of COVID,” Edmondson said, “it’s important that we open up our installations, so that we can reunite with the local communities.”

Harford County Council President Patrick Vincenti was one of the county leaders on the tour.

“It gives us a great opportunity to really truly understand and see firsthand the capabilities that the Army has and what an amazing facility this is in our backyard,” Vincenti said.

Del. Mary Ann Lisanti said the visit was “fabulous,” and that she enjoyed meeting with APG commanders to understand their “deeper mission.”

“Every time you come, it’s exciting to see things and you get to really have a better understanding of our workforce,” she said.

An aerial tour by a Maryland National Guard helicopter up the coastline from APG South in Edgewood to APG North in Aberdeen allowed the visitors to see how much of the Chesapeake Bay borders APG and how the military installation tries to remain “stewards of the environment,” said Phil Molter of APG’s public affairs office.

“Most of [Harford County’s] shoreline is part of Aberdeen Proving Ground and to see that visually was really fascinating,” she said.

Following the tour, the visitors saw a presentation of colors at the Top of the Bay from Freestate ChalleNGe Academy, which provides academic and life skills to at-risk youths.

Edmonson said that despite the past few years of the pandemic, APG is stronger now.

“We’re open to evolution and to learning,” he said. “And so, what we’re showcasing here today is the tremendous capability that is Aberdeen Proving Ground.”