WASHINGTON — A federal rule governing “ghost guns” took effect Wednesday, requiring for the first time that the kits — which allow people to assemble homemade firearms — include serial numbers, and mandating background checks for people who buy ghost guns from dealers.

The rule imposed by the Biden administration has been challenged in court, but judges in Texas and North Dakota both declined requests to block it. Additional court challenges are pending.

Ghost guns have drawn growing scrutiny in recent years. At a Rose Garden ceremony in April that included gun kits as props, President Joe Biden called them the “weapons of choice for many criminals.”

Between 2016 and 2021, the Bureau of Alcohol, Tobacco, Firearms and Explosives received more than 45,000 reports of “privately made firearms” being recovered by authorities during criminal investigations. The Justice Department reported more than 19,300 such firearms recovered in 2021 — nearly five times the tally from 2018.

“This rule will make it harder for criminals and other prohibited persons to obtain untraceable guns,” Attorney General Merrick Garland said in a statement Wednesday. “It will help to ensure that law enforcement officers can retrieve the information they need to solve crimes. And it will help reduce the number of untraceable firearms flooding our communities.”

The department, Garland said, “will continue to do everything within its power to protect our communities from violent crime and put an end to the plague of gun violence.”

Firearm-safety advocacy groups and some law enforcement officials for years have called for the government to tackle ghost guns, either through legislation or other action. But most efforts to pass gun laws on Capitol Hill have gone nowhere in recent decades, amid gridlock in Congress and strong opposition from the gun-rights lobby. Lawmakers did pass modest gun-control legislation this year, in the wake of several high-profile mass shootings.

Opponents of the ghost-gun rule sought a judge’s order to prevent it from taking effect Wednesday, denouncing the requirement as unconstitutional overreach.

A federal lawsuit filed in North Dakota — by plaintiffs including a gun store in the state; a group of Republican attorneys general; and Gun Owners of America, a gun lobbying group — said the rule “violates principles of federalism” and “will sow chaos within large segments of the firearms community.”

On Tuesday, Peter Welte, chief judge on the U.S. District Court for the District of North Dakota, denied their requests for a preliminary or permanent injunction, writing that the Biden administration had acted within its authority in laying out the rule. Welte, nominated in 2019 by President Donald Trump, wrote that the new measure “was and remains constitutional under the Second Amendment.”

“Without a doubt, this case presents divisive issues that all parties care about deeply and that are of national concern and importance, as demonstrated by the participation of nearly every state in this country in this action,” he wrote in a 27-page order. “Nevertheless, the court’s role and responsibility remains the same — to apply the law to the facts (and not the arguments or policy) of each case.”

The new rule changes how a “firearm frame or receiver” is defined in federal regulations, expanding it to “include a weapon parts kit” that can be quickly assembled. The Justice Department said the rule does not ban anyone from having a privately made firearm.

But in lawsuits challenging the rule, opponents assailed it as overly broad and said it would have a catastrophic effect on businesses and workers.

In a separate federal lawsuit in Texas, the measure was opposed by Division 80, a company that distributes receiver blanks, which are also used by people looking to build firearms themselves. The company said the rule “will destroy Division 80’s entire business” and asked for it to be blocked or delayed.

U.S. District Judge Jeffrey Brown, who was also nominated in 2019 by Trump, denied the request, saying Division 80 “failed to show that it will suffer irreparable harm absent an injunction.” Attorneys in the case did not immediately respond to a request for comment Wednesday.

In the North Dakota case, the lawsuit challenging the new federal rule said it would subject gun owners “to ever encroaching, illegal and unconstitutional infringements of their right to keep and bear arms.”

Gun dealers, it said, “will be conscripted into federal service to keep illegal records of privately made firearms on behalf of the federal government — records that are not required by any federal law.”

The rule, the lawsuit argued, could cost businesses tens or hundreds of million dollars in sales. “Protected Second Amendment activity will grind to a halt,” the lawsuit said, “numerous companies will falter or go out of business, and jobs will be lost.”

A spokesperson for Arizona Attorney General Mark Brnovich, a Republican who in July had announced that he was co-leading a group of 17 states joining the North Dakota case, said Brnovich’s office was “disappointed” with Welte’s decision and “will continue to defend the 2nd Amendment against overly burdensome regulations.”

“The right to keep and bear arms includes the ability to procure guns, as well as parts and ammunition,” spokesperson Brittni Thomason said in a statement.

Stephen Stamboulieh, one of the attorneys for the plaintiffs in the North Dakota case, said in an email Wednesday that they “plan on continuing the fight against” the new rule and “are discussing internally what our next steps will be.”

The Justice Department had argued in court filings that the new rule was constitutional and necessary “to provide clarity to the public and the firearms industry on the proper application of federal law.”

In the North Dakota case, the department wrote that technological advances made it easier to create kits and parts that “allow unlicensed persons to make firearms quickly and easily” — usually without serial numbers, making it hard for law enforcement officials to trace the weapons if they are used in crimes.

The department argued that the rule was “a valid exercise of the authority ATF has been expressly granted by Congress” and pushed back against the idea that the rule created “an unlawful national gun registry.” Instead, the department wrote in court papers, the rule only extended how long certain records already kept must be maintained.

The Justice Department said the rule does not prohibit businesses from selling the products but instead makes it so that they “must comply with the same regulatory framework that all federally licensed firearms dealers must comply with.”

Granting the requested injunction, the department said in the North Dakota case, “would significantly harm the government’s interests in law enforcement and public safety.”

In his order on Tuesday, Welte wrote: “The rather speculative risk of harm to the plaintiffs, on the one hand, does not outweigh the harm to the ATF’s interest in law enforcement and public safety, on the other.”

Authorities representing a group of cities — including New York, Chicago, Los Angeles and Philadelphia — also weighed in to support the federal rule in the North Dakota case.

They wrote in a filing that their cities had experienced “dramatic increases” in ghost guns being used in criminal activity. The new rule, they said, was “absolutely necessary to stop the dangerous proliferation of ghost guns and to promote public safety.” A group of states wrote in a separate filing that the rule would help them as they updated their own gun laws. 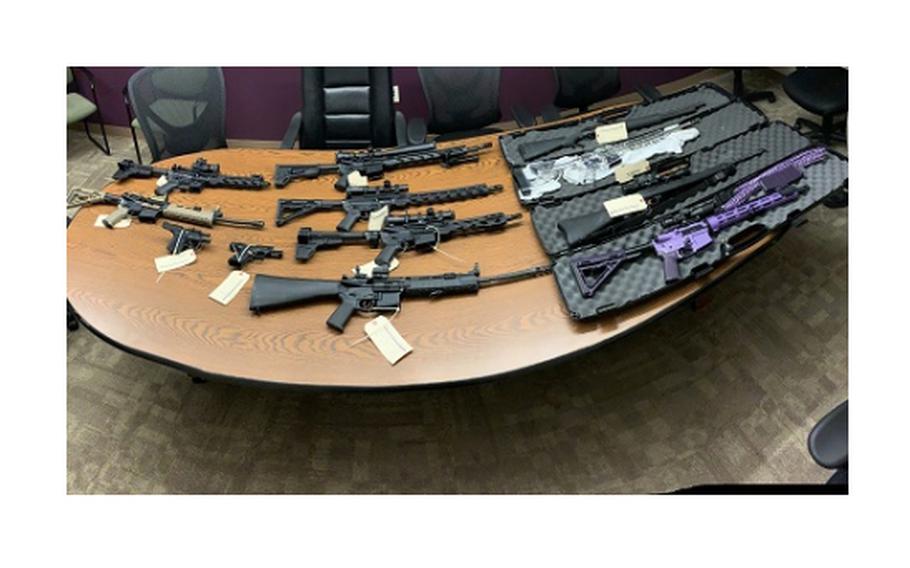