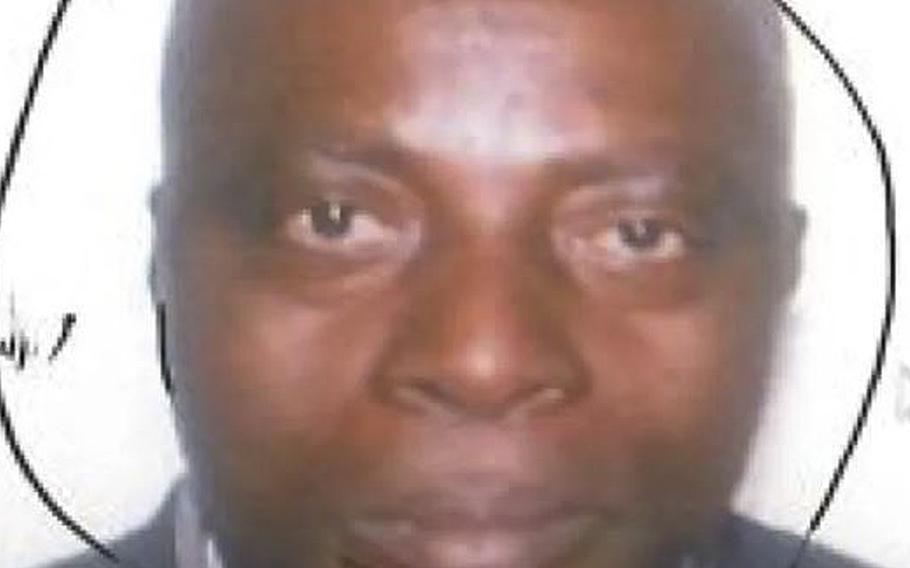 Moses Thomas, a former server at a Philadelphia restaurant, purportedly had been a commander in Liberia’s army’s Special Anti-Terrorist Unit, during a 1990 massacre at Monrovia, Liberia, church. (Center for Justice and Accountability)

(Tribune News Service) — A former server at a Philadelphia restaurant has been ordered to pay $84 million in damages to four citizens of Liberia for leading a massacre that resulted in the deaths of more than 600 civilians seeking sanctuary in a church during the West African nation’s first civil war.

The historic civil judgment, handed down last week by a federal magistrate judge in Philadelphia, is the latest in a series of court actions that seek to hold accountable accused Liberian war criminals, several of whom resettled in Southeastern Pennsylvania as refugees in the ‘90s and early 2000s.

Moses Thomas, 68, was working at the now closed Southwest Philadelphia dining spot Klade’s when he was first identified in a 2018 lawsuit as the military commander who led the 1990 slaughter at St. Peter’s Lutheran Church in Monrovia — an episode that the U.S. State Department has identified as one of the “worst single episodes” of the gruesome multi-factioned ethnic conflict that left more than 200,000 civilians dead between 1989 and 1997.

“Although no amount of damages will provide adequate redress for what [the victims] have suffered,” U.S. Magistrate Judge Lynne A. Sitarski wrote in her Aug. 16 order, “a substantial award could have some deterrent effect on future would-be human rights abusers.”

He fled back to Liberia after he was outed by the lawsuit to avoid the jurisdiction of the U.S. courts. Reached there by phone on Monday, he dismissed the court order as “stupidity” but otherwise declined to comment.

“Let them go to hell and kiss my ass,” he told the West Africa Reporting Project on Saturday. “To hell with their decision and everything! ... You think I have time for corrupt judges who make stupid decisions without any evidence?”

Because he is no longer in the United States, it is unlikely that Thomas will ever be forced to pay his victims. Still, the judgment Sitarski entered against him was significant.

It is only the second time a U.S. court has awarded damages to Liberian civil war victims under the 1992 Torture Victims Protection Act, a law that allows foreigners to pursue civil claims for torture and extrajudicial killings against people living the U.S.

The civil suit that prompted the ruling did not specifically accuse Thomas of killing anyone at the St. Peter’s Lutheran Church.

Instead, one of the plaintiffs and two former members of the Armed Forces of Liberia who served as witnesses in the case said they saw him standing outside the gates to the church directing the soldiers who opened fire.

At the time, Thomas was a commander in the army’s Special Anti-Terrorist Unit, the elite special forces team that served as the personal guard for then-Liberian President Samuel Doe. By the summer of 1990, Doe’s forces were under siege in Monrovia, surrounded by rebel forces under the command of Charles Taylor, who would go on to succeed Doe in the presidency.

Doe believed the population of ethnic Mano and Gio people in Monrovia was more loyal to the invading army than his own. And hoping to root out spies and potential rebels, Thomas’ unit was dispatched to pull Manos and Gios from their homes, haul them off to detention centers or execute and decapitate them in the streets.

The chaos prompted several families to flee to shelters like St. Peter’s Lutheran.

Thomas, according to the lawsuit, stopped by the church compound in the days before the massacre to promise the roughly 2,000 people inside his protection. Yet on the night of July 29, the court found, he ordered 45 government soldiers to kill everyone in the building.

Mothers saw their children shot down among the pews. Men watched in horror as their brothers were hacked to death by machete-wielding soldiers. Bodies filled the nave, left to rot in the aftermath until volunteers eventually buried the corpses two months later.

The plaintiffs — who filed their case under pseudonyms for fear of retaliation in Liberia — described the harrowing aftermath in declarations submitted to the court.

They survived by hiding under bodies as soldiers fired their weapons indiscriminately and stabbed at corpses with machetes and bayonets to ensure everyone inside the church was dead.

“It was mayhem,” said one, who described cowering in the church’s pulpit clutching a Bible to his chest. “People started running around chaotically. ... They shot everyone trying to escape.”

Another plaintiff described waiting until hours after the soldiers had left before she dared try to climb out from under the crush of corpses that had buried her.

“I waited on the floor, under the fallen bodies and soaked in others’ blood,” she said. “There were so many bodies, I could not see the floor. I did not see any other survivors.”

After an hour, other witnesses said in sworn affidavits, Thomas ended the assault with a single command: “Everyone is dead. All soldiers out.”

Nearly three decades later, Thomas scoffed at the lawsuit’s effort to blame him for the Lutheran church attack during an interview with The Inquirer.

He insisted that he never left the presidential palace on the day of the massacre and that he and his unit had provided protection for the survivors afterward.

He maintained that he, too, later became a victim of persecution after Doe was beheaded in the streets of Monrovia and Taylor was elected president seven years later.

Thomas was granted temporary protected status as a refugee and fled to the U.S. in 2000.

A record of impunity

Though Thomas, now believed to be living in Monrovia, may have escaped the reach of the U.S. courts, lawyers for the plaintiffs said the ruling should send a strong message to the Liberian government that he should be criminally prosecuted by courts in that country.

“For our clients, their priority has been investigating the truth of what happened to them and their loved ones,” said Nushin Sarakati, a staff attorney at the Center for Justice and Accountability, which represented the Liberians in their suit. “This is a very serious crime that still needs investigating and still needs accountability for these victims.”

Prospects for that outcome, however, remain dim.

To date, the Liberian government has yet to hold anyone responsible for the dozens of documented atrocities committed on all sides of the civil war.

In that absence, U.S. authorities have led the charge in recent years to hold Liberian war criminals to account — particularly in Philadelphia, where federal prosecutors have won criminal convictions against two high-level leaders from opposite sides of the war in recent years.

In 2018, a federal judge sentenced Mohammed Jabateh of Lansdowne to 30 years in prison for hiding his past as a brutal warlord who engaged in acts of murder, sexual violence, and cannibalism under the nom de guerre “Jungle Jabbah.”

That same year, a jury convicted Jucontee Thomas Woewiyu — Taylor’s former spokesperson — for lying to U.S. immigration authorities about his complicity in war crimes committed by Taylor’s regime. He died from complications stemming from the coronavirus in 2020 before he could be sentenced.

But unlike those four men — all of whom were prosecuted not for the atrocities they committed but for later lying about them to immigration authorities — Thomas never sought permanent residency or U.S. citizenship and therefore could not be criminally prosecuted under the same immigration laws.

Still, his victims said the U.S. court’s ruling in their civil case gave them something they’d been denied by their own government for decades — acknowledgment of what they’d survived.

“It’s very difficult for me to remember about these events, because it makes me feel terrible,” said one of the plaintiffs in a statement circulated by his attorneys. “But I joined this case and am speaking out now because I know what Moses Thomas did was wrong, and I want to bring him to justice. I want him to be held accountable for what he did to me and so many others at the Lutheran Church.”