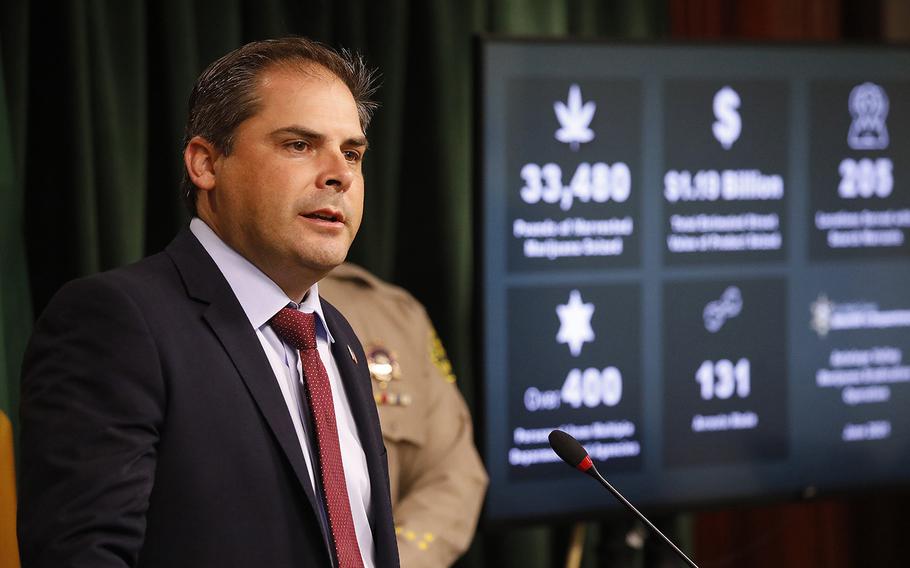 LOS ANGELES (Tribune News Service) — Rep. Mike Garcia, a Republican who faces one of the most competitive House races in the country, likened the Biden administration to the Nazi regime during an interview on a conservative podcast last week.

Referencing the recent FBI search for classified documents at Mar-a-Lago, the Florida residence of former President Donald Trump, Garcia, R-Calif., accused the Biden administration and what he called the "Deep State" of "weaponizing federal agencies" for political purposes.

"This is literally tyranny of a majority right now that is acting more like a Third Reich than they are the United States. And this is very dangerous," Garcia told Sara Carter, a right-leaning media personality, on her eponymous podcast.

References to Nazi Germany have emerged as a popular rhetorical flourish for Trump's most stalwart backers. But unlike those safely ensconced in a deep red district, Garcia is locked in a hotly contested reelection battle for his northern Los Angeles County district that will hinge on his ability to win over independents and Democrats, not just the GOP base.

A spokesperson for Garcia's campaign could not immediately be reached for comment.

After last year's redistricting process, Democrats have a 12-point registration advantage in the 27th Congressional District, which includes the cities of Palmdale, Lancaster and Santa Clarita. The redrawn lines made Garcia one of the most vulnerable Republican incumbents in the nation and a top target for Democrats, who see the seat as a rare pick-up opportunity.

Garcia is squaring off against Christy Smith, a Democrat and former state assemblywoman who lost to Garcia in a 2020 special election and came up just 333 votes short in a rematch in November that year. Political prognosticators consider the race a toss-up.

Facing a more Democratic-leaning electorate, Garcia has tried to pull off a political balancing act. He voted against certifying the results of the 2020 election and against impeaching Trump for his role in the Jan. 6, 2021, attack on the U.S. Capitol. But he has emphasized work that has more cross-party appeal, including support for military families and efforts to combat illegal marijuana grows in the Antelope Valley.

In a speech earlier this month at the Reagan Library, he called for redefining "America First" as being more engaged globally, breaking from Trump's isolationist streak. And he called for more bipartisan cooperation, denouncing politicians and activists on both sides of the political spectrum of "retreat(ing) to their caveman tendencies."

Garcia made similar points in his podcast interview with Carter, lamenting an "us-versus-them mentality."

Carter then raised concerns that federal bureaucracies could target political enemies, referencing "FBI raids" in an allusion to the Aug. 8 search of Trump's estate. Garcia said her questions were valid.

"They're not doing this to try to get a reckoning or to bring justice and have someone held accountable. They do it for political purposes," Garcia said. "This is why you see the the charges levied, the raids made and in some cases, no charges even brought forward. But then never substantiated, ever followed through and then never actually prosecuted."

The Justice Department investigation into Trump continues; a warrant that was unsealed at the request of Attorney General Merrick Garland showed that the former president is under investigation for potential violations of the Espionage Act, which bars the unauthorized retention of material related to national defense, as well as obstruction of justice laws. During the search, agents removed 11 sets of classified documents — including some marked top secret that were not supposed to be taken outside government facilities.

Other GOP politicians denounced the actions by the Department of Justice as those of a banana republic or other oppressive regime.

Such rhetoric has been denounced by other Republicans, such as Maryland Gov. Larry Hogan, who said Scott's Gestapo analogy was "very concerning to me. It's outrageous rhetoric." He described the heated criticism of federal law enforcement as "dangerous," pointing to an incident where, days after the Mar-a-Lago search, a man tried to breach an FBI office in Cincinnati before dying in a confrontation with police.