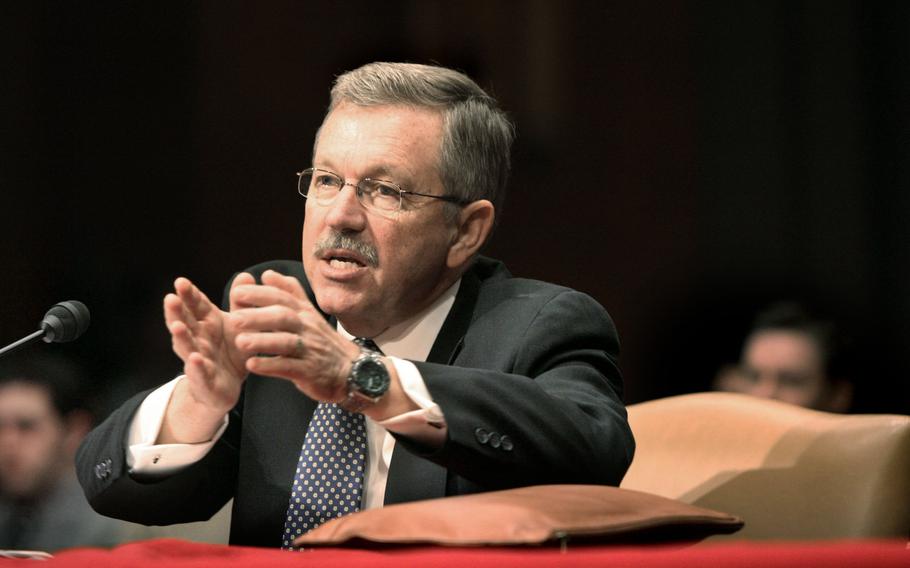 David A. Kay, the weapons proliferation expert who led a CIA-run operation in 2003 that concluded former Iraqi ruler Saddam Hussein had built no weapons of mass destruction, sharply undermining the chief justification for the U.S.-led invasion earlier that year, died Aug. 13 at his home in Ocean View, Del. He was 82.

The cause was cancer, said his wife, Anita Kay.

Kay, a reserved Texan with an international affairs doctorate, had an early career teaching political science before joining organizations such as UNESCO in Paris and the International Atomic Energy Agency in Vienna. In 1991, he became a household name while serving in Iraq as chief nuclear weapons inspector for the United Nations and the IAEA after the United States and its allies had liberated Kuwait from Hussein's forces.

The mission of all the U.N. teams was to search out and destroy any banned nuclear, biological or chemical weapons or materials. In September 1991, using powers granted under a U.N. resolution, Kay's nuclear team launched an unannounced inspection of a military facility in Baghdad to look for incriminating documents about Hussein's clandestine efforts to develop nuclear arms.

Because it was close to his team's hotel, Kay had already surveilled the building by running past it on his morning jog to see where security was tightest. During the inspection, his 44-person group was detained after attempting to remove documents and videotapes they considered significant and endured a four-day standoff followed by media around the world.

Using a relatively newfangled satellite phone, Kay answered calls from news agencies, notably CNN, while surrounded by Iraqi guards. He and his team slept in their vehicles — a bus and several cars. As pressure from the U.N. Security Council and the world grew, the Iraqis let them leave with the documents and tapes.

"The chemical program was huge," he later told journalists with the PBS series "Frontline," summing up all the U.N. teams' findings after the 1991 war. "The actual storage area of their main chemical weapons dump was larger than the District of Columbia. … In the nuke area, whereas before the war there were two facilities identified … instead we discovered 25 main sites that we had had no knowledge of, and that they, at that point, were probably six to 18 months away from having their first working nuclear device. It wouldn't have been a pretty device, and it wouldn't have launched on a missile, but it would have been a working device, and then rolling progressively forward on that area.

"Finally, when the biological program was fully exposed in the mid-90s," he added, "we discovered that not a single site that had been hit in the air campaign of the first Gulf War had actually had an active biological program. They had moved them all to sites that we did not know about, successfully hid them. In fact, they had a very large anthrax program, botulinum toxin program, ricin, and a quite accomplished biological program."

The U.N. teams destroyed Iraq's illicit weapons and programs in the 1990s, but after the inspectors were forced out in 1998, the CIA worried Hussein was secretly rebuilding his WMD. After the al-Qaida terrorist attacks on Sept. 11, 2001, the Bush White House portrayed those suspicions as irrefutable evidence of a direct Iraqi threat to America and its allies.

When the March 2003 invasion quickly toppled Hussein's regime, a Pentagon team fanned out across Iraq but failed to find any sign of the weapons of mass destruction. That summer, George W. Bush put the CIA in charge of the hunt, and then-CIA Director George Tenet picked Kay to lead the newly named Iraq Survey Group.

Although he went to Iraq convinced that sites suspected of housing weapons of mass destruction would be found, he soon concluded that none existed and that the CIA and other intelligence agencies had badly misjudged the available evidence. Frustrated by the CIA's refusal to agree, Kay resigned from the weapons-hunting group in January 2004. Days later, he gave explosive testimony to the Senate Armed Services Committee.

"We were almost all wrong, and I certainly include myself here," he told the panel. "It turns out we were all wrong, probably in my judgment, and that is most disturbing."

Soon after, Bush called him into the White House. Even though Iraq had no WMD, Kay told the president he believed that the invasion was the right thing to do because of the suffering of the Iraqi people under Hussein.

Bush thanked him for his work, but Bush, Vice President Dick Cheney and Defense Secretary Donald H. Rumsfeld continued to play down Kay's conclusions, suggesting Hussein may have smuggled some illicit weapons out of the country and may have at least been planning a WMD program.

Kay found himself a veritable outcast for publicly saying the CIA was wrong. He was treated "coldly," he said, when he returned to CIA headquarters.

"One part of it, it's almost comical to me," he told "Frontline." "In fact, I laughed at the time because it was so much like a poor spy novel. I was given an office that didn't have a working telephone, that was surrounded by packing cases, at the depths of Langley, with a secretary that usually wasn't there. You'd have to have been pretty dumb not to have caught the signals of it. But not even to have a secure phone in the office where you can't talk to anyone, nor a computer where you can e-mail — I understood it."

British Prime Minister Tony Blair, too, facing fury from those who opposed the Iraq invasion that he had supported, was forced in February 2004 to announce an inquiry, known as the Butler Review after its chairman Lord Robin Butler, which took until that July to issue a report that concluded that the intelligence used to justify the invasion was "unreliable" and over-reliant on dissident Iraqi sources.

One of the key sources for the false intelligence was an Iraqi defector to Germany who was code-named Curveball. The CIA did not interview him until a year after the invasion, but his bogus account of Iraq's biological weapons became a linchpin of Secretary of State Colin Powell's address to the U.N. Security Council in February 2003, which set the stage for war.

In his 2007 book, "Curveball: Spies, Lies and the Con Man Who Caused a War," journalist Bob Drogin wrote that Kay spent months trying to find proof for Curveball's account and was distraught when he finally concluded it was a fraud.

"I always saw David as a heroic but tragic figure," Drogin wrote to The Washington Post in an email. "He publicly admitted that all the experts, including himself, had been wrong on Iraq's supposed weapons of mass destruction. The CIA and the Bush White House could not forgive him for that. He became an outcast for speaking truth to power."

David Allen Kay, whose father was a real estate broker, was born in Houston on June 8, 1940. He graduated with a bachelor's of business administration degree from the University of Texas at Austin in 1962 and went on to Columbia University's School of International and Public Affairs, where he received a master's in degree in 1964 and a doctorate in 1967.

Early in his career, he was an assistant professor of political science at the University of Wisconsin at Madison, during which he also served as an adviser in international organizational affairs to the U.S. mission to the United Nations.

He was senior evaluator of programs at the U.N. Educational, Scientific and Cultural Organization in Paris from 1974 to 1983 before working as a monitor of developing nuclear energy technologies at the International Atomic Energy Agency. After serving in 1991 and 1992 as U.N. chief weapons inspector, he spent nine years as a vice president of Science Applications International. He later was a senior fellow at the Potomac Institute for Policy Studies, a private research group in Arlington, Va., taught at several universities and was a commentator specializing in arms control.

His first marriage, to Jane Agnew, ended in divorce. In 1978, he married Anita Hall. In addition to his wife, survivors include a daughter from his first marriage, Karen Simmons of Moneta, Va.; and two grandchildren.

On retirement to Ocean View, Kay indulged an interest in photography. "He especially enjoyed photographing surfers at the Indian River Inlet, sunrises at Bethany Beach, also visiting Charleston, S.C., and New Orleans to take pictures," Anita Kay said. "He had a wicked dry humor and was just as comfortable laughing over a drink and chatting about photography as he was conferring with world leaders about democracy."