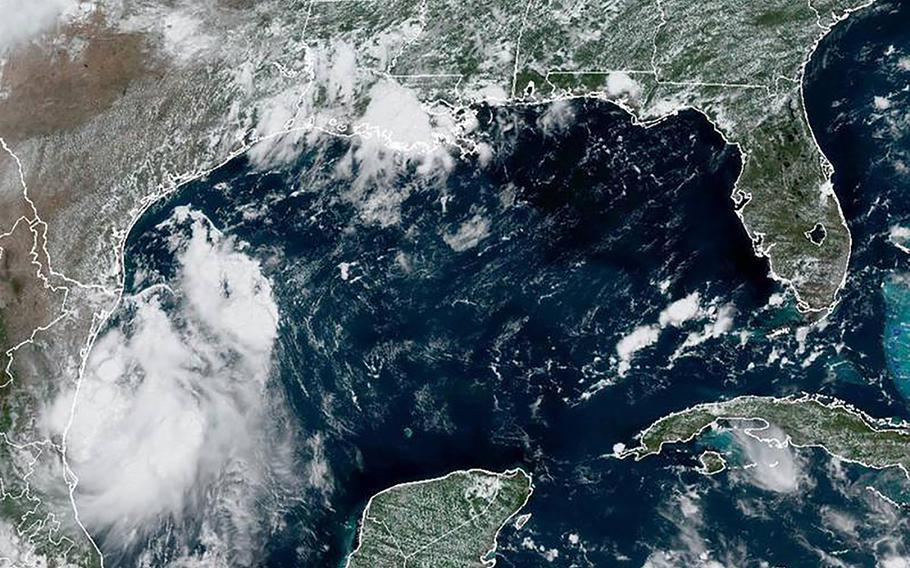 ORLANDO, Fla. (Tribune News Service) — The National Hurricane Center continued tracking what it's calling Potential Tropical Cyclone Four in the Gulf of Mexico warning it could form into the season's next tropical storm on Saturday while also keeping an eye on a new potential system in the Atlantic.

As of 8 p.m., the Gulf system was located about 95 miles south-southwest of the mouth of the Rio Grande River with maximum sustained winds of 35 mph heading northwest at 14 mph.

"Tropical storm conditions are expected to occur in the warning area during the next several hours," NHC forecasters said in the public advisory. If it strengthens into a tropical storm, it would be named Tropical Storm Danielle.

In place since Friday is a Tropical Storm Warning issued by Mexico that runs along the Gulf coast from Boca de Catan north to the Rio Grande River and continues up the U.S. coast into Texas from the Rio Grande to Port Mansfield. Tropical storm conditions are expected within 36 hours, the NHC said. There is no threat to Florida.

Officially, the system has a 50% chance of formation in the next two days, the NHC said.

"The system is moving toward the northwest near 14 mph and this motion is expected to continue, bringing the system across northeastern Mexico and southern Texas tonight," the advisory said.

Storm surge threat could see up to a foot on the coast from the mouth of the Rio Grande to Port Mansfield while coastal swells could cause life-threatening surf and rip current conditions.

Previously a tropical wave, the low emerged over the Bay of Campeche Friday morning and is producing better organized shower activity. If it does develop beyond depression strength, it will take on the name Tropical Storm Danielle.

Also Saturday, the NHC began keeping track of a potential system that could form off the coast of Africa.

As of the NHC's 8 a.m. tropical update, a tropical wave was forecast to move off the west coast of Africa sometime Saturday and conditions could lead to gradual development as it moves west-northwest at 15 to 20 mph into the eastern and central tropical Atlantic.

The NHC gives it a 20% chance to form into a tropical depression or storm in the next five days.

So far, the 2022 hurricane season has been off to a slow start despite preseason forecasts calling for a year of above-average storm production due to a lingering La Nina and warm sea-surface temperatures. Typically, a normal season should experience its fourth named storm by Aug. 15, according to the National Oceanic and Atmospheric Administration, and its first hurricane by Aug. 11.

But since July, the Atlantic basin has experienced tropical silence after a fairly productive June which saw the formations of Alex, Bonnie and Colin — the latter of which fizzled at the beginning of July. At the start of August, the NHC was tracking a few different short-lived systems with the potential to form into depressions or tropical storms, but unfavorable dry conditions snuffed them out.

The snuffer responsible? The Saharan Air Layer, otherwise known as the SAL, has been a big contributing factor this season in drying out the atmospheric conditions of the Atlantic. The SAL is a migration of African dust that pushes west into the Caribbean acting as a tropical shield and making it too dry for hurricanes to form.

Despite that, the NOAA reaffirmed its preseason prediction of an above-average hurricane season earlier this month with a range of 14 to 21 named storms. An average year calls for 14 named storms.

The NOAA expects most storms to emerge during the season's peak, which occurs between mid-August and mid-October.