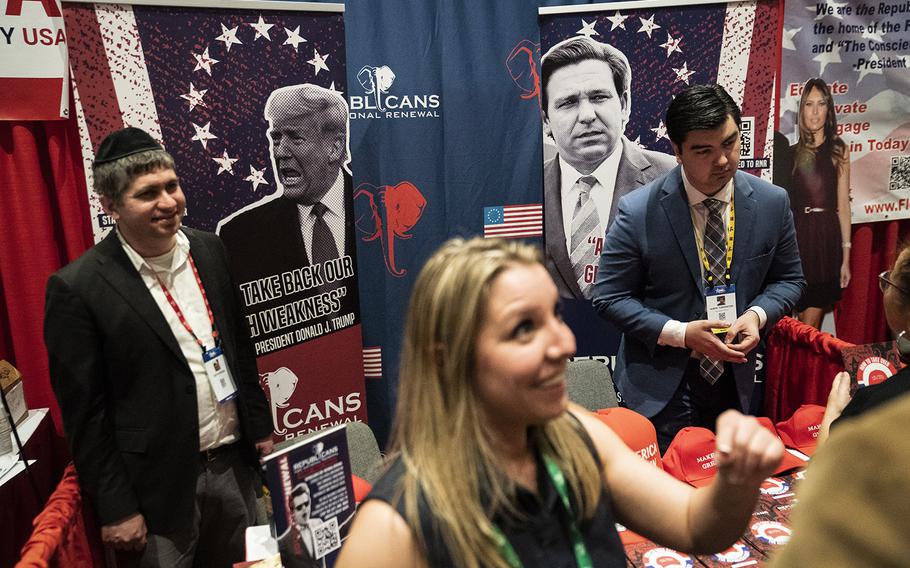 Posters of former president Donald Trump and Florida Gov. Ron DeSantis are displayed during the first day of the CPAC conference in Orlando on Feb. 24, 2022. (Jabin Botsford/Washington Post )

The front-runner for the 2024 GOP presidential nomination is Donald Trump. But he may no longer be the most likely nominee.

For as long as we've been doing our quarterly rankings of the Republicans most likely to be the party's nominee in 2024, No. 1 has been an easy pick. Trump still commands extensive loyalty in the GOP, as evidenced by the historically large primary defeat of Rep. Liz Cheney, R-Wyo.

But commanding that loyalty and being the guy at the top of Republicans' ballots for the third straight election aren't quite the same thing. And for the first time, we're giving the slight edge - and the top of our list - to Florida Gov. Ron DeSantis.

The reasons for this might not be what you think.

The search of Trump's residence at Mar-a-Lago last week was momentous. Exactly how it breaks politically, though, we don't yet know.

There is some indication this development might actually have rallied the GOP to Trump, at least temporarily. The sense of persecution, long fed by Trump, has proved an invaluable political commodity, and he's got plenty of grist for that mill - whatever the actual legitimacy of his highly speculative claims of political targeting.

But the political impact of the Mar-a-Lago search won't be measured in the polls conducted in the past couple of weeks. This is a long game. And the legal jeopardy Trump faces could well reinforce some of the reasons DeSantis appears to have gained on him in earlier surveys. Namely: Trump's uncertain electability and the political baggage he totes along with him.

Those factors endangered Trump's stranglehold on the party well before the Mar-a-Lago search. Two states likely to hold important early primaries - Michigan and New Hampshire - featured polls showing Trump and DeSantis running neck and neck. In this year's primaries, Trump-aligned candidates almost always win, but that's in large part because the party has overwhelmingly aligned with Trump's values. In contested primaries, the candidates Trump himself actually endorsed have often been stuck around 30% of the vote.

Indeed, those primaries suggest people might be willing to go with Trumpism, and to go without Trump. And DeSantis provides that in spades. He's constantly pushing the envelope by opening new fronts in the culture wars and pushing actual legislation or executive actions to back that up. But more than that, he does so with the kind of actual attention to detail and policy that Trump has long eschewed.

Fox News's Laura Ingraham recently wagered that Republicans might become so "exhausted by the battle - the constant battle - that they may believe that, well, maybe it's time to turn the page if we can get someone who has all Trump's policies, who's not Trump."

Crucially, we have yet to see Trump face a truly Trumpian opponent. In 2016, pretty much everyone was going after Trump on the assumption that they had to offer an alternative to his brand of politics - or because they were losing and needed to do something. Today, lots of Republicans are emulating Trump's in-your-face, own-the-libs style. And nobody has done that more successfully than DeSantis.

It's not difficult to see Republicans coming to view DeSantis as a more serious version of Trump - and potentially a more electable one.

This isn't an easy call. But throw in the perhaps-undersold possibility that Trump won't actually run in 2024, and we put DeSantis at No. 1 by a hair.

Below are our latest rankings, in ascending order of likeliness.

10. Donald Trump Jr.: As we've said before, this applies only to a scenario in which his father doesn't run. But that's a scenario in which some polls show him running as high as second (with the caveat that we don't have a lot of good polling). He'd clearly have a base to work with, but capitalizing on that is another matter. And it's not just about lobbing bombs from the sideline, which is his true talent. (Previous ranking: 7)

9. Mike Pompeo: The former secretary of state returns to this list, showing all the signs of a guy who will run. Those include running digital ads in Iowa and South Carolina. Also worth watching: He recently became one of the highest-profile Trump officials to testify to the Jan. 6 committee. And afterward, he seemed to temper his denial about having discussed removing Trump from office using the 25th Amendment, saying merely that it hadn't been discussed "seriously." It'll sure be interesting to see how Trump backers respond to whatever testimony Pompeo provided. (Previous ranking: N/A)

8. Rick Scott: The senator from Florida is often dismissed because of his awkward personal style. But he's been positioning himself for the national stage by launching his own platform (which Senate Minority Leader Mitch McConnell has distanced himself from). And if Republicans can win back the Senate, perhaps Scott gets some credit as head of the Senate GOP's campaign arm? That's a double-edged sword though, given it's quite possible Republicans blow a good opportunity. (Previous ranking: N/A)

7. Nikki Haley: The former United Nations ambassador and South Carolina governor is a real contender on paper. She's also leaning hard into the idea that she'll run, having repeatedly cited the idea of electing a woman as president. (You'll notice she's the only woman on this list.) But races aren't won on paper. Haley often disappears from the national discourse, and it's still not clear what her campaign would be about. (Previous ranking: 4)

6. Ted Cruz: The senator from Texas has been out front in criticizing the FBI's search of Trump, including an early push for the search warrant. He has also floated impeaching Attorney General Merrick Garland and the FBI agents had been turned into "stormtroopers." (Previous ranking: 6)

5. Glenn Youngkin: It still seems like a bit of a stretch for someone to launch a presidential campaign just a year into his one term as governor. (Virginia doesn't allow governors to seek reelection). But he's clearly putting himself in the mix, and 2022 could play into his hands. Imagine a world in which flawed candidates cost the GOP winnable races - and possibly the Senate - in states like Arizona, Georgia, Ohio or Pennsylvania. At that point, the guy whose 2021 win was supposed to be a road map for the party - a road map disregarded in these Senate primaries - might look pretty attractive. (Previous ranking: 8)

4. Tim Scott: The senator from South Carolina has faced some criticism from the right for his endorsement of moderate Sen. Lisa Murkowski, R-Alaska. But if anyone can get past that kind of thing, it might be the broadly liked South Carolina senator. He's also raising massive sums - $9.6 million last quarter - for what should be an easy reelection bid, and he can use that money to run for president. Scott's recent book included a blurb that said he was preparing a presidential run, but the publisher later said it was an error and that Scott hadn't approved the line. (Previous ranking: 5)

3. Mike Pence: Pence offered some interesting comments this week, opening the door to testifying to the Jan. 6 committee and saying, "The American people have a right to know what happened." He has walked a fine line on criticizing Trump for that day, despite the insurrectionists endangering his life. We shouldn't expect him to thoroughly denounce the man who picked him as vice president, but he's certainly got a vested interest in the party moving in a different direction. The hard part is facilitating that without completely alienating the Trump backers he'd need in 2024. (Previous ranking: 3)