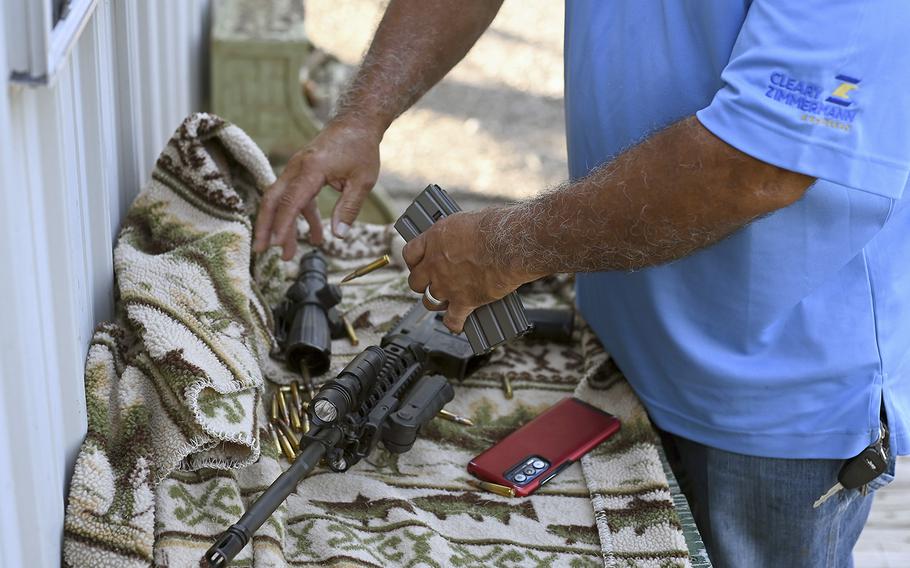 Bullets are removed from a clip to an AR-15. (Joshua Lott/Washington Post )

After a three-month-long investigation into the gun manufacturing industry in the wake of a string of mass shootings this year, House Oversight Committee Chairwoman Carolyn Maloney, D-N.Y., is introducing two pieces of legislation targeting the manufacturers of AR-style rifles.

The proposed legislation includes a bill that would impose a 20 percent tax on the total revenue earned by manufacturers of assault weapons and high-capacity magazines and a bill that would require each firearm manufacturer to create and implement a system to track and analyze crimes committed with firearms they have sold.

The draft bills reviewed by The Washington Post - called the Firearm Industry Fairness Act and the Firearm Industry Crime and Trafficking Accountability Act - come on the heels of a report from the committee that found that five of the largest gun manufacturers in the United States did not track crimes associated with their products and that the industry earned more than $1 billion from the sales of AR-style weapons in the past decade.

The Firearm Industry Fairness Act would mean that "the family hunting rifle is not taxed at the same rate as an assault weapon, and would ensure that the firearm industry, like other industries in America, takes responsibility for the safety and misuse of its products," Maloney said in a statement.

The federal excise tax imposed on the sale of certain firearms has not been updated since 1954 - "years before civilian automatic rifles were invented," according to the legislation. "Despite the continued killings of children, teachers, and families with these weapons, federal taxes on firearms fail to differentiate between hunting rifles and weapons of war like AR-15s."

The Firearm Industry Crime and Trafficking Accountability Act also mandates that manufacturers prohibit supplying firearms to a retailer if the company knows that "its provision of firearm products to that retailer will lead to a high risk of criminal activity or diversion," and empowers the Bureau of Alcohol, Tobacco, Firearms and Explosives to issue a civil penalty on manufacturers that continue to supply those retailers.

The committee's report analyzed data related to 12 gun dealers that showed "troubling gun sales patterns, based on guns recovered in connection with crimes from 2014 through mid-2019 and traced back to these gun dealers." A different study conducted by ATF found "that 5 percent of licensed dealers sell about 90 percent of guns used in crimes," according to the bill.

The committee has assailed gun manufacturers that sold AR-style weapons used in recent mass killings, arguing that companies have employed aggressive tactics and marketing campaigns to promote the military-style guns that have prompted a major surge in sales.

President Joe Biden signed into law the first major gun safety legislation passed by Congress in decades; however, the ban on AR-style weapons and high-capacity magazines passed by the House is unlikely to clear an evenly split Senate.