Vehicle thefts are rising in Norfolk. Some citizens are taking matters into their own hands. 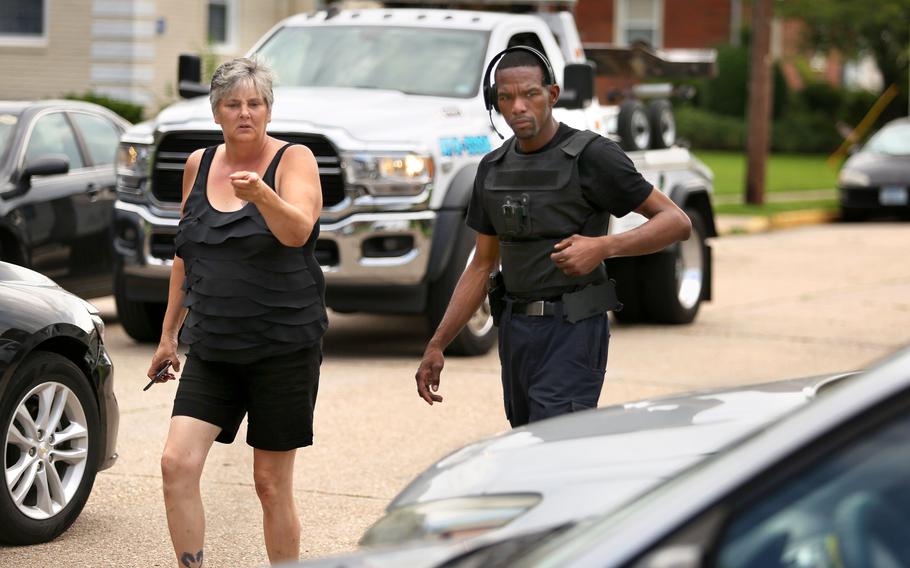 Sherry Okamoto and repo agent Nio Hollie look for a stolen car in Norfolk on Friday, August 5, 2022. Okamoto came to Hampton Roads from CA a couple of weeks ago to help her son find his stolen car. She eventually tracked it down, but before returning home she made it her mission to look for other people's stolen vehicles. (Stephen M. Katz/TNS)

(Tribune News Service) — Sherry Okamoto drove down Warren Street in the Talbot Park neighborhood on a recent weekday morning stopping to point out a burgundy Honda Accord with no license plates and an expired registration sticker.

Okamoto suspected the car was stolen and hopped out to take a picture of the car’s VIN number so a repossession agent she works with could scan it. It’s a quiet residential area, but the repossession agent, Nio Hollie, found three stolen or abandoned cars in the neighborhood the week prior.

As the number of cars stolen in Norfolk has skyrocketed this year, Hollie and Okamoto are among a volunteer group of stolen car hunters who have taken matters into their own hands. They fan out across the city almost every day, looking for stolen cars from a crowd-sourced list.

They collect the stolen car reports from residents via Facebook groups. Okamoto estimates she gets 60 or more messages per day from people in Norfolk who have had their cars stolen and want her help.

“It’s just back and forth like a ping-pong ball,” Okamoto said. “One found, four stolen. Two found, three stolen.”

Hollie has a scanning system in his tow truck, so he’s able to look up the car’s VIN number to see if it’s stolen. When they find a car on the list, Hollie calls it into police if it’s been reported stolen and law enforcement returns it to the owners.

“If it wasn’t for Norfolk PD, going out and checking out all the tips that we’re sending them, they wouldn’t be found,” Okamoto said.

The Honda in question that day wasn’t stolen, but had the plates stolen off it, so Hollie notified law enforcement.

Norfolk police did not respond to a request for comment on the group’s efforts.

Okamoto, 52, fell into the role by accident. She lives in California and came east in June to help locate her son’s car, which was stolen while he was deployed with the Navy. While looking for the car, Okamoto made contact with members of a local police scanner Facebook page, a group that monitors police radio channels and posts about notable incidents, who started telling her about other car thefts in the city.

The police eventually found her son’s BMW 3 Series, but Okamoto decided to stick around as her daughter-in-law, Lynn, felt unsafe at home alone following the theft. While in the area, she figured she would look for other stolen cars.

Auto thefts are up by 44% this year in Norfolk. Halfway through the year, 760 vehicle thefts were reported compared to 526 thefts during the same period in 2021.

To curb the thefts, Interim Norfolk Police Chief Mike Goldsmith urged motorists to avoid leaving valuables, including car keys, inside their vehicles and to not leave vehicles running unattended. Norfolk police have also warned residents who drive Kias and Hyundais that they may be more susceptible to theft. The concern is fueled by the social media spread of a trend dubbed the #KiaChallenge — videos shared on TikTok or YouTube that purportedly showcase how to hotwire the cars using simple tools like a cellphone charger.

As auto thefts rise, residents have taken to social media, begging community members to keep a look out for their cars.

Kate Hawryluk, 32, posted in a Facebook police scanner group when her Lexus was stolen from right in front of her Larchmont house in July. Her work laptop and some important documents were inside.

Hawryluk is a hospice worker, and not having a car is incredibly inconvenient. She has to Uber or have her fiancé drop her off up the street from a patient’s house so as to not violate patient privacy laws.

“I feel trapped,” Hawryluk said. “I feel powerless. I feel violated. Like I can’t have a family call me in distress, and be able to just jump in my car and go be there for them.”

Hawryluk’s car was found nearly a month after it was stolen, completely totaled. She said many parts were missing, and bullet boxes and blood were scattered in the car. Hawryluk bought a new car, an extra expense since she had finished paying off the stolen Lexus.

This ongoing issue, Okamoto said, is threatening people’s livelihoods. As she crisscrossed Norfolk on Aug. 5, she had hoped to find a black Volvo that was stolen from a firefighter.

The Norfolk Police Department, which is more than 30% below its full staffing level, can only do so much, she said.

“Everybody’s helping,” Okamoto said. “It’s not just me. It’s not even close. There’s a large group really trying to bring these cars home.”

One of those volunteers is Anne, who asked to be identified exclusively by her middle name. She goes out every night from midnight to 4 a.m. looking for cars on the list. She says she got involved after someone tried to break into her car three separate times while it was parked in front of her house in broad daylight.

Anne said everything the group does is legal and safe — they don’t put themselves in harm’s way, and they’re not “renegades.”

“When people talk to me about this, I say that we’re a civilian task force that’s assisting the police ... because they don’t have the ability or time,” she said.

When it comes to recovering stolen cars, Okamoto said she has her limits on how involved she’ll get.

“My son’s car, I would have stepped in and stole it back,” she said. “But I’m not going to do that with somebody else’s car. I’m crazy. I’m not that crazy.”

While Okamoto organized the group, they will have to carry on the hunt without her. Aug. 5 was Okamoto’s last day in Norfolk. She left before noon to catch a flight back to California — her grandchild had been born early. But she’ll still try to help the group remotely track which cars are stolen and found.

“I have no doubt, as long as they need my help, I’ll be there,” Okamoto said.