Where exactly will astronauts land on the moon? NASA is going to tell us 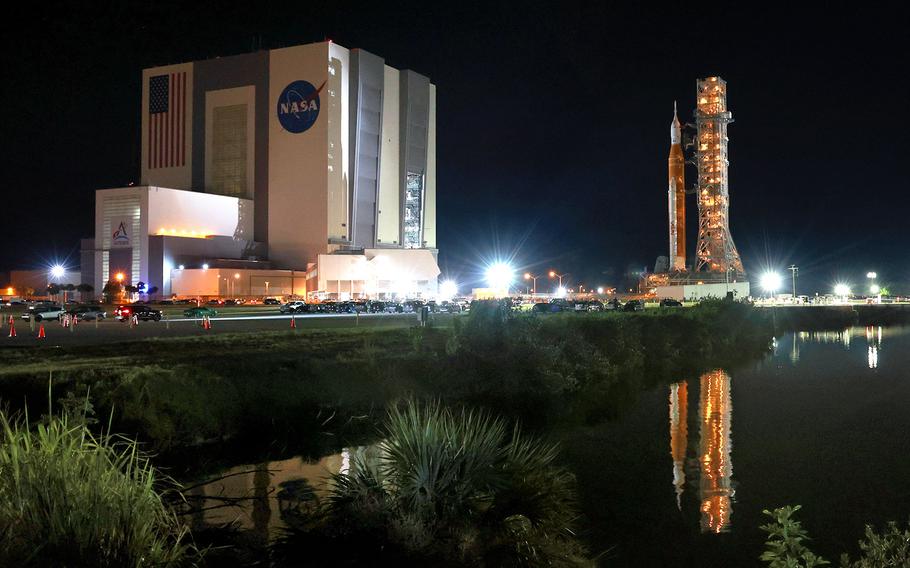 Artemis I leaves the Vehicle Assembly Building as it rolls out to launch pad 39-B at Kennedy Space Center, Florida, Tuesday, Aug. 16, 2022. The rocket is scheduled to launch on an unmanned mission to orbit the moon on Aug. 29. (Joe Burbank/Orlando Sentinel/TNS)

ORLANDO, Fla. (Tribune News Service) — With NASA's first Artemis mission to the moon set to launch before the end of the month, teams are gearing up for future missions with astronauts including just exactly where the next people to set foot on the moon will be leaving their footprints.

NASA has announced a news conference for 2 p.m. Friday to reveal potential landing locations for the Artemis III mission, which is still targeting a launch in 2025, but not before the uncrewed Artemis I flight slated to launch on Aug. 29 and a crewed Artemis II flight in 2024 that will send humans back to the moon, but not only to orbit it.

Artemis III would mark humans' return to the surface for the first time since Apollo 17 astronauts Eugene Cernan and Harrison Schmidt left the surface on Dec. 14, 1972.

The Apollo program managed six landings with two humans each for a total of 12 to walk on the moon between 1969-1972.

Artemis III is also aiming to send two humans including the first woman on the moon. That mission is waiting on a Human Landing System from SpaceX using a modified version of its in-development Starship. Future Artemis missions could continue to use the Starship version of HLS or another design by a SpaceX competitor to be determined under a new contract.

In addition to the six human landings, there have been 17 successful soft robotic landings. Most of these have been near the moon's equator, and most took place from 1966-1976 by either the U.S. or Soviet Union. It was not until 2013 that a lander returned to the moon, this time by China, which has since had three successful soft landings including the first on the far side of the moon.

For Artemis III, it will be one of several potential sites in the moon's south pole in NASA's effort to find ice, which could be converted into air to breathe and fuel to burn as part of any plans for long-term lunar settlement.

"Within each region, there are several potential landing sites," reads a statement from NASA. "Each of the selected regions, from which specific landing sites could be selected, is of scientific interest and was evaluated based on terrain, communications, and lighting conditions, as well as ability to meet science objectives."

The live stream of the announcement briefing can be seen on NASA's website.