Deal struck to expedite production of monkeypox vaccines in US

WASHINGTON — White House and health-industry officials on Thursday announced a deal to expedite millions of doses of monkeypox vaccines by moving some manufacturing to the United States, following criticism the Biden administration had failed to secure a large enough supply.

Under the arrangement, Denmark-based Bavarian Nordic will work with Michigan-based Grand River Aseptic Manufacturing to package 2.5 million doses of vaccine that the United States had ordered in July. Bavarian Nordic produces Jynneos, the only vaccine against monkeypox approved by the Food and Drug Administration, while Grand Rapids Antiseptic specializes in helping package pharmaceutical products.

“This partnership between Bavarian Nordic and GRAM will significantly increase the capacity to fill and finish government-owned doses — for the first time in the U.S. — and allow us to deliver our current and future supply more quickly to locations nationwide,” White House monkeypox coordinator Bob Fenton said in a statement.

Officials said that work was already underway to transfer technology from Bavarian Nordic to Grand River Aseptic Manufacturing, and that manufacturing of the additional doses could begun later this year.

The arrangement, which had been discussed for weeks, comes after the White House faced questions about why it had not ordered more doses or transported them from overseas, including hundreds of thousands of doses that were at Bavarian Nordic’s factory in Denmark awaiting FDA inspection in June.

“With this agreement we will significantly expand our manufacturing capabilities into the United States allowing Bavarian Nordic to meet the growing worldwide demand,” Paul Chaplin, CEO of Bavarian Nordic, said in a statement.

Bloomberg News first reported the planned deal between the companies.

At a press briefing earlier Thursday, Biden administration officials said they had been working with Bavarian Nordic to help increase its production capacity.

“They’re a small manufacturer,” said Dawn O’Connell, head of the Administration for Strategic Preparedness and Response, which oversees the national stockpile of vaccines. O’Connell added that the administration was working with Bavarian Nordic on additional manufacturing capacity increases, such as “potentially working with a larger pharmaceutical company, for example.”

Administration officials have approached vaccine manufacturers such as Pfizer or Merck to partner with Bavarian Nordic, according to two people with knowledge of the conversations who were not authorized to comment. 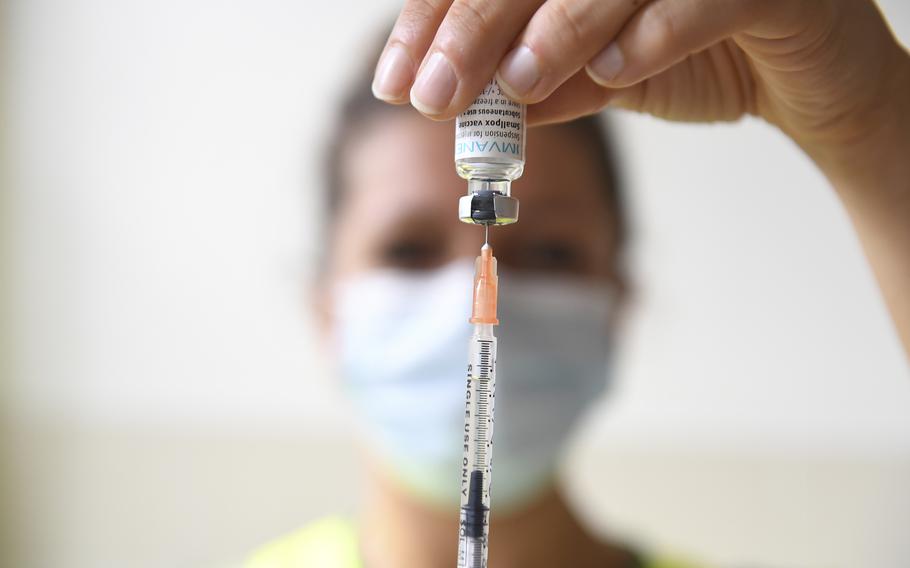 A health professional prepares a dose of a Monkeypox vaccine at the Edison municipal vaccination center in Paris July 27, 2022. (Alain Jocard, Pool via AP)