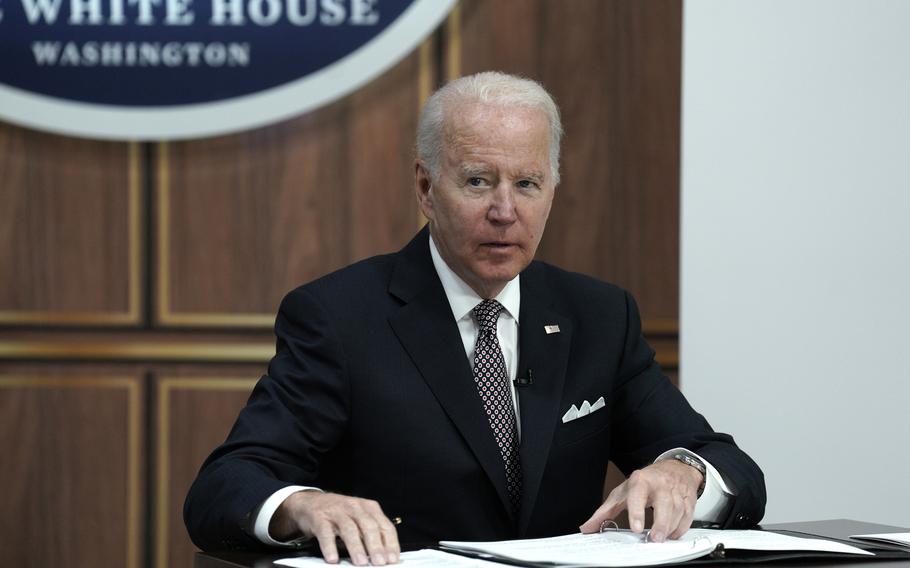 President Joe Biden speaks virtually at the Major Economies Forum on Energy and Climate, in the South Court Auditorium at the White House on Friday, June 17, 2022, in Washington, D.C. (Yuri Gripas/Abaca Press/TNS)

The court on Wednesday threw out the judge’s nationwide injunction forcing a restart of leasing from the Gulf of Mexico to Alaska and ordered the judge to revisit the issue. In the meantime, Biden’s pause stands.

The ruling came in a dispute between the administration and 13 energy-producing states led by Louisiana that sued to force Biden to resume leasing he paused a week after taking office. After the lower court last year issued its preliminary injunction against the leasing moratorium, the government appealed.

“We cannot reach the merits of the government’s challenge when we cannot ascertain from the record what conduct — an unwritten agency policy, a written policy outside the executive order, or the executive order itself — is enjoined,” the appeals court wrote Wednesday.

It isn’t clear what immediate effect the ruling will have. Under the just-enacted Inflation Reduction Act, which provides hundreds of billions of dollars to fight climate change, the Interior Department is required to hold two auctions of oil and gas leases in the Gulf of Mexico.

The law also makes future renewable energy projects on federal lands and waters contingent on leasing. The government can issue new wind and solar rights only if it has recently sold new drilling rights too — a requirement designed to spur more fossil fuel leasing despite Biden’s campaign pledge to stop permitting such projects on public lands.

A spokeswoman for the Interior Department said it was reviewing the ruling. Cory Dennis, a spokesperson for Louisiana Attorney General Jeff Landry, didn’t respond to a request for comment.

“The practical impacts” of the ruling, and even of the case’s ultimate outcome, “may be minor” given those leasing mandates, said Erik Milito, president of the National Ocean Industries Association, which represents offshore oil and wind companies.

Biden issued the moratorium so officials could examine the environmental impact of the leasing. Environmentalists have pressured the president to go further in reducing fossil fuel development on federal lands.

“We are in a climate emergency and cannot afford any new leasing that will further entrench the fossil fuel industry’s hold on our country’s energy future,” Caputo said.

Rising energy demand and surging gasoline prices in an election year had prompted administration officials to urge oil companies to boost production from existing leases. Energy interests say the U.S. can’t afford to curtail new development on public lands and waters, which collectively provide about a quarter of the nation’s crude oil supply.

Although new offshore production can take years to bring online, oil industry executives say the new auctions are needed to replenish reserves and offset natural declines at existing wells in the Gulf.

After the lower-court judge ordered the Interior Department to restart sales, environmental groups objected in a separate action. A Washington-based judge canceled the first of those auctions, for 1.7 million acres (688,000 hectares) in the Gulf, after finding the government had underestimated the climate consequences.