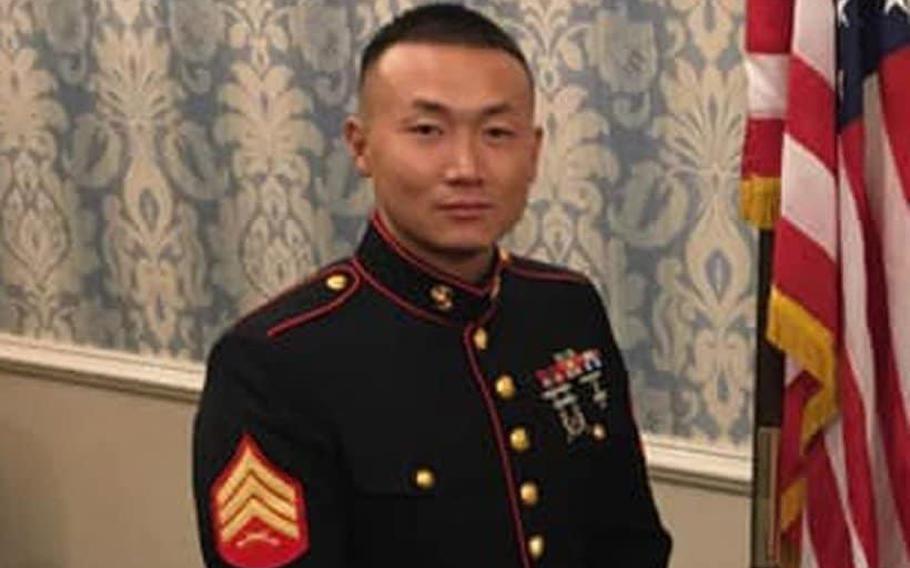 Officer Baimadajie Angwang, 35, is accused of using his position as a cop in Queens to infiltrate Tibetan communities in the city and give the Chinese government a glimpse into the inner workings of the NYPD, federal prosecutors allege. (NYC Police Benevolent Association/Facebook)

Officer Baimadajie Angwang, 35, is accused of using his position as a cop in Queens to infiltrate Tibetan communities in the city and give the Chinese government a glimpse into the inner workings of the NYPD, federal prosecutors allege.

A Marine Corps veteran who was also employed by the U.S. Army Reserves, Angwang had a “secret” level security clearance from the Department of Defense, according to the feds.

He’s since been discharged from the Army Reserves as a result of his arrest, and remains suspended with pay by the NYPD.

When his trial starts on Sept. 12, the feds want the jury to hear wiretapped talks between the cop, who was arrested in 2020, and his Chinese handler that detail how he can best serve his foreign taskmasters.

At one point, Angwang suggested that his handler use his status in the NYPD as a selling point to climb the career ladder in China, telling him in 2018, “Let them know, you have recruited one in the police department.”

In one conversation, Angwang made it crystal clear that his real loyalties were to his Chinese handler, who he referred to as “boss,” prosecutors said.

In November 2019, NYPD brass wanted Angwang to be interviewed by New Tang Dynasty Television, after the dissident-founded network asked for a camera-friendly cop to appear on one of its programs, according to court filings.

“The defendant was well-suited to the task: he had by that time been assigned to serve as a community liaison officer and was fluent in Mandarin,” federal prosecutors wrote in a motion filed Wednesday.

He consulted his Chinese consulate handler first, though, because the New York-based TV network was founded by adherents of Falun Gong, a spiritual movement banned by China in 1999, according to the feds.

Angwang said he’d have “no problem” doing an interview with “People’s Daily,” a China state-controlled newspaper, but New Tang Dynasty Television was another matter, prosecutors said.

“I think you absolutely shouldn’t do it,” his handler told him, according to court filings. “In the future, if you want to go back or something, it will have an enormous impact.”

Angwang, who joined the NYPD in 2014, received asylum in the United States after he claimed he was tortured by China because he was ethnically Tibetan, according to a criminal complaint. Tibet has been occupied by China since 1951, and mired in a decades-old fight for independence.

In reality, Angwang’s parents are both members of the Chinese Communist Party, according to the complaint.

Angwang was released on $2 million bond in February 2021 after catching COVID-19.