A Capitol rioter tried to bond with a Reagan judge, then got a lecture 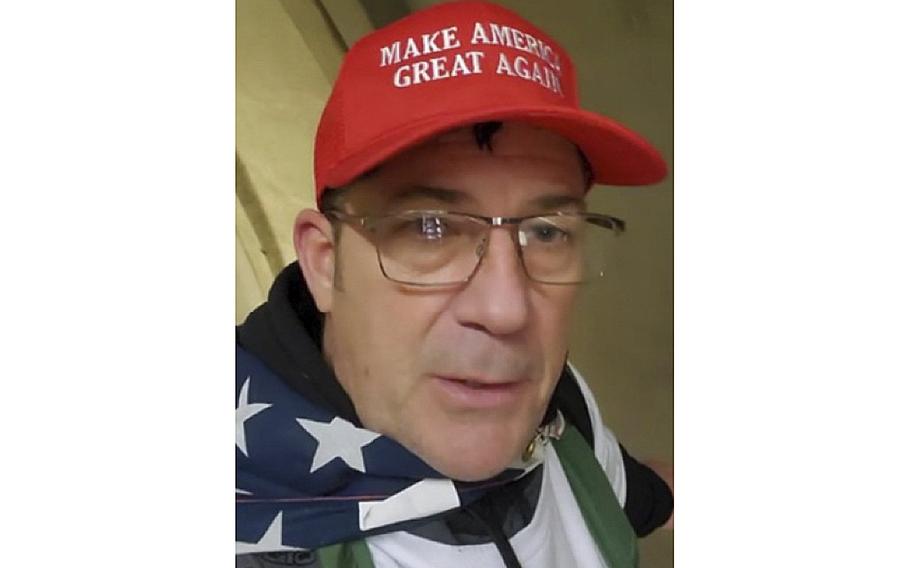 John Cameron, a realtor from the Seattle area was sentenced Monday, Aug. 15, 2022, to 30 days in jail for entering the U.S. Capitol during the Jan. 6, 2021, riot in Washington, D.C. (lawandcrime.com/court documents)

WASHINGTON — "Can you guess who my favorite president is?" asked the man about to be sentenced for his role in the attack on the U.S. Capitol on Jan. 6.

Senior Judge Thomas F. Hogan did not respond. So John Cameron, a real estate agent from the Seattle area, answered his own question. "Ronald Reagan," he said during the hearing Monday, suggesting the judge might agree. Hogan was appointed to the federal bench in Washington by Reagan 40 years ago.

Cameron, 55, went on to recite the Pledge of Allegiance, which Reagan made part of Flag Day ceremonies that same year.

The judge was not impressed. He had questions of his own. How, he asked, could Cameron claim to have seen no violence or clear sign he could not enter the Capitol during the riot? Did he not hear murderous chants and blaring alarms, smell tear gas, see people climbing up scaffolding and through windows? Did he think, as he said on Facebook, that it was all "fun"? And if so, was he withdrawing his plea to a misdemeanor charge?

"No," Cameron replied, after a moment's hesitation. "I picketed within the Capitol, and that was illegal. … I would never do it again."

But his depiction of himself in court and on social media as a peaceful observer targeted for political reasons prompted an angry lecture from the judge.

He compared the Jan. 6 rioters to "a lynching mob" in which the support of encouragement of more passive members like Cameron was crucial: "A mob doesn't act alone."

Numerous federal judges in D.C., including Hogan, have lamented before that many Jan. 6 defendants appear not to have truly accepted responsibility for their actions that day even when pleading guilty. Earlier this month, Judge Dabney L. Friedrich, a Trump appointee, warned one conservative activist she had sentenced to probation that he might be exposing himself to new charges by suggesting his plea was a lie.

"Exercise some discretion," she told Brandon Straka. Two days later, Straka set up a fake jail cell at the Conservative Political Action Conference and demanded a congressman do more for Jan. 6 defendants.

Hogan suggested that sentences meted out thus far that "have not impressed." Like most of his colleagues, he has given lighter punishments than prosecutors requested in the majority of the Jan. 6 cases he has handled. All have been misdemeanors, and Hogan has ruled that active jail time cannot be combined with probation in those cases.

Hogan told Cameron that he was lucky prosecutors had not moved to charge him with a felony after his recent social media statements.

"If you had pleaded to a felony, I would just put you in jail for a long time," he said. Instead he gave him 30 days in jail and three years of probation, as requested by the government, with the incarceration made intermittent to conform with his understanding of the law.

"The court at least hopes that in this three-year period, you don't engage in any such conduct again," Hogan concluded.

The Washington Post's Tom Jackman contributed to this report.