In Taliban-era Afghanistan, US grapples with having little sway 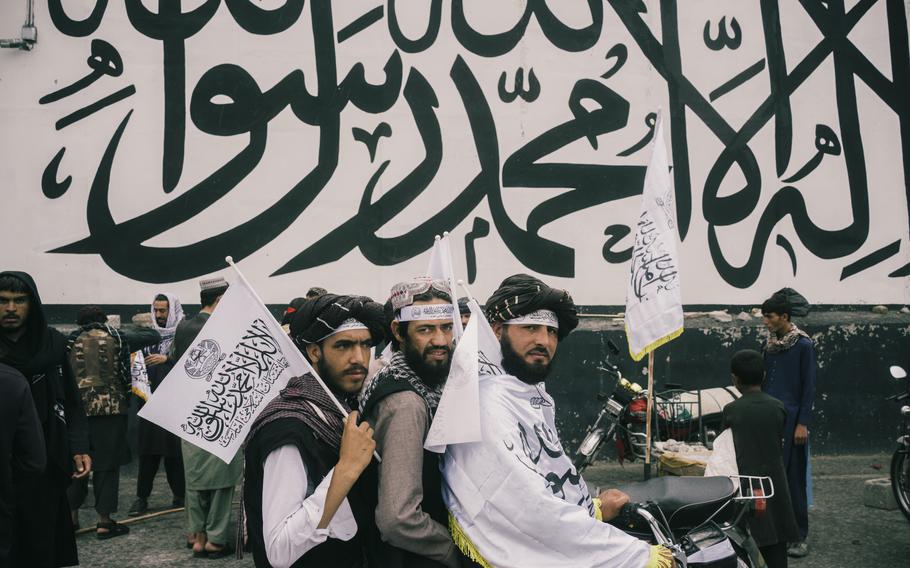 Taliban militants celebrate in the square in front of the U.S. Embassy in Kabul on Monday. One year earlier, after a chaotic withdrawal by the United States, the group swept into the Afghan capital and completed its takeover of the country, ending a long, brutal war and upending the lives of millions. (Lorenzo Tugnoli/The Washington Post)

A year after withdrawing U.S. troops, the Biden administration wields scant leverage in Afghanistan as it struggles to assist needy Afghans, evacuate U.S. allies and protect women’s rights in a nation where it once held unparalleled sway.

U.S. officials are working with Islamic organizations and nations including Qatar and the United Arab Emirates as they seek to employ the few tools they have to influence the Taliban government — sanctions and travel bans, and the promise of potential diplomatic recognition — in hopes of preventing terrorist attacks, helping U.S.-linked Afghans emigrate and recovering an American hostage.

Officials acknowledge that the Taliban, despite internal divisions, has so far showed itself unwilling to bow to foreign pressure on issues of ideological importance, including far-reaching restrictions it has imposed on women and girls.

Thomas West, the Biden administration’s special representative for Afghanistan, defended President Joe Biden’s 2021 decision to end the long U.S. military mission in Afghanistan, a step that was quickly followed by the Taliban’s takeover of a state the United States had worked two decades to construct.

“Ending the longest war in American history was never going to be easy,” ​ West said in an interview late last week.

He cited signal accomplishments that officials have said justify the reversals that followed: an end to U.S. military casualties in Afghanistan and a heightened U.S. ability to address priority issues — including competition with Russia and China, and climate change. For the first time in two decades, West said, “we are fully focused on the challenges and opportunities that define the 21st century.” ​

The Biden administration’s tentative interactions with the Taliban government over the last year have been disrupted by Taliban decisions limiting girls’ ability to attend school and restricting women’s dress and, more recently, the American drone strike that killed al-Qaida leader Ayman al-Zawahri, revealing the Taliban’s harboring of the world’s most wanted terrorist in downtown Kabul.

That halting course illustrates the central dilemma Washington faces in Taliban-controlled Afghanistan: how to achieve a minimal set of U.S. objectives without further empowering a militant group that American troops battled for 20 years. The conundrum has political implications, as any steps to expand U.S. dealings with the Taliban risk intensifying Republican criticism of Biden’s handling of Afghanistan ahead of the midterm elections.

Many experts and former officials are urging the Biden administration to resume a wider role nonetheless. They advocate a potential return of U.S. diplomats to Afghanistan, a step they say can occur without reopening the shuttered U.S. Embassy or conferring official recognition on the Taliban. Even then, just as administration officials acknowledge in private, they have low expectations for what such a course can achieve.

U.S. officials have spent much of the last year attempting to size up the new Taliban government, as veteran militants step out of the shadows of a 20-year insurgency and assume new public roles. While the Taliban has insisted it desires greater outside aid and recognition, its decisions demonstrate that the movement remains chiefly focused on dogma and maintaining internal cohesion.

Those policies produced a bitter disappointment among U.S. officials because they belied years of Taliban promises it had moderated its stance and because they demonstrated that the new militant government was willing to ignore intense international pressure against such a move.

“There is a reality that we’re all very cognizant of - that we don’t have the leverage that we had prior to when we had a presence on the ground,” said a senior U.S. official, who, like other officials in this story, spoke on the condition of anonymity to discuss a sensitive policy. At the war’s peak, the United States had some 100,000 troops in Afghanistan. Over the course of two decades, Washington spent billions of dollars on schools, hospitals and roads, attempting to build a modern and inclusive Afghan state.

“What we can say is that we are prepared to use all the tools at our disposal to impress upon the Taliban that this is not only bad for women, but ultimately that they are going to fail,” the official said.

Despite those setbacks, the United States has remained the largest donor to Afghanistan in the Taliban era, providing some $775 million in aid over the last year to Afghans facing hunger and hardship since the government collapse plunged the country into economic free fall. To avoid funding the Taliban directly, the assistance is now channeled through international organizations and aid groups.

Another senior U.S. official said the Biden administration would continue to have a “pragmatic dialogue” with the Taliban on assistance and other issues, including the administration’s goal of relocating additional Afghans who worked with the United States. Despite evacuating tens of thousands of Afghans in the chaotic aftermath of the government’s collapse on Aug. 15, 2021, the Biden administration has faced intense criticism for not moving fast enough to assist Afghans at risk of Taliban reprisal.

“That is going to require engagement with the Taliban,” the second official said.

Officials are also advancing plans to establish a vehicle for injecting as much as $3.5 billion in frozen Afghan government reserves back into the country’s struggling economy. The Biden administration is not planning to release those funds in the country’s central bank, which is controlled by the Taliban and, in U.S. officials’ view, cannot be trusted to administer the reserves.

“The Zawahri strike affirms and validates our deep concerns regarding diversion,” the second U.S. official said.

Another U.S. priority is the fate of Mark Frerichs, an American contractor who was kidnapped in Kabul in 2020. The White House has said the recovery of Americans held hostage or wrongly detained overseas is a top foreign policy issue.

One of the few levers the Biden administration can use to attempt to influence Taliban behavior is its clout at the United Nations, where diplomats are due to discuss a possible extension of a waiver to a ban on Taliban travel later this week. The ban was earlier waived amid long-running negotiations in Doha, Qatar, that resulted in the Trump administration’s 2020 deal with the Taliban, setting the stage for Biden’s withdrawal the following year.

Last week, a group of former senior diplomats including Ronald Neumann, who served as U.S. ambassador to Afghanistan during the George W. Bush administration, advocated a reimposition of the ban.

“None of us believe that’s going to cause them to make a change, but we need to at least show that we’re serious about the things we talk about,” Neumann said.

The Biden administration may prefer a low-profile approach to Afghanistan as it seeks to elevate other foreign policy priorities and minimize the repercussions of the events surrounding the withdrawal, which were widely condemned as a foreign policy failing.

That could include maintaining the current wait-and-see approach, effectively isolating the Taliban. James Dobbins, a veteran diplomat who served in senior roles on Afghanistan during the Bush and Obama administrations, said isolation may appear more politically appealing because it requires “no decisions, no resources and no political exposure.”

“But it never works,” Dobbins said. “In the history of foreign affairs, as far I know, it has never produced the desired results.”