In a pinch, couple made her wedding dress from his WWII parachute 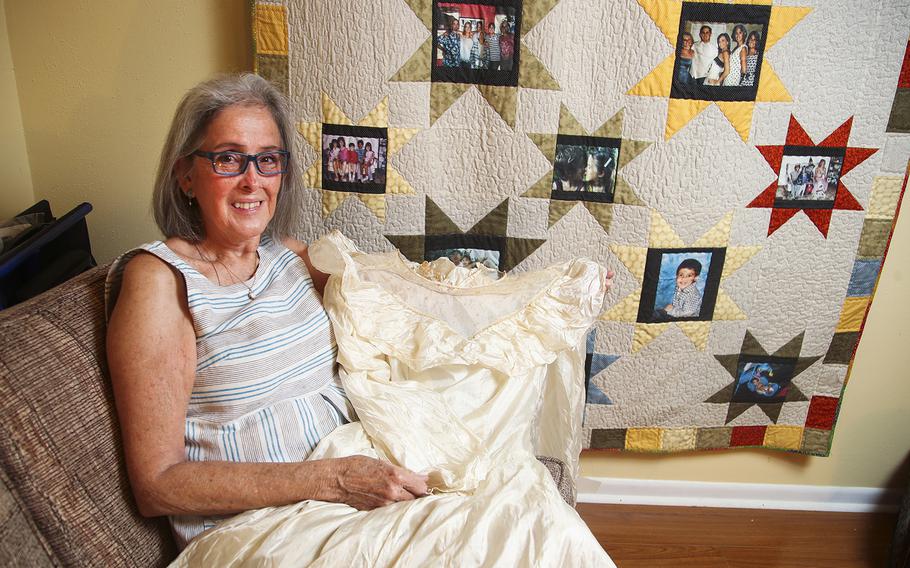 Frances Alvarez, 70, holds her mom's wedding dress, which was made from a parachute her father brought home from World War II. (Dirk Shadd/Tampa Bay Times)

TAMPA, Fla. (Tribune News Service) — Milagros was only passing through Tampa on her way back to Cuba. Joe, a man she had known for around a year, primarily through letters, had another idea.

He told her to return to Cuba to collect her belongings and come right back to marry him.

Milagros knew her traditional family would insist she get married in a wedding dress, which she couldn’t afford. Joe promised he had it covered.

His cousin then made a dress from a white silk military parachute Joe had brought back from the Pacific, where he served during World War II.

From her Tampa home in recent weeks, their 70-year-old daughter, Frances Alvarez, had been rummaging through what they left behind, mostly photos and family documents.

Then, from one box, Frances pulled the parachute wedding dress.

“This dress is the memory,” she said. “It is symbolic of who they were. They knew how to make things work. They didn’t have much but they had a wonderful life together because of their love.”

Joe was the youngest of two children born to Tampa cigar workers and the first of his Cuban family born in the United States. He was 3 when his father died of tuberculosis.

“Whenever I asked him about the Depression and how it affected them, he’d laugh and say, ‘Depression? We lived the Depression all our lives. It didn’t affect us at all,’” Frances said.

When the war broke out, Joe joined the Navy and, from the USS Randolph, served as an aviation ordnanceman putting fuses on bombs.

Around a year after the Japanese surrendered, he visited family in Havana, where Milagros lived.

Milagros was born in Cienfuegos and later moved to Havana, where she, her parents and brother shared a one-bedroom house that had an outdoor kitchen and bathroom.

“Her mother was very sickly, and couldn’t work,” Frances said. “So, my mother had to go to work at the age of 12 as a maid.”

Joe and Milagros met due to happenstance.

While Joe was in Havana, a family friend had a date with an American merchant marine. Neither spoke the other’s language, so the friend asked Joe to serve as a translator. She’d bring a friend and make it a double date.

“She brought my mother,” Frances said.

They went to a movie theater where Milagros’ father was a security guard, hit it off and spent the next few weeks together.

Joe promised to write from Tampa as often as he could. She couldn’t speak or write English. He spoke Spanish fluently but struggled to write it.

“So, his mother helped him write letters in Spanish,” Frances said.

They wrote for months. Then, Milagros’ aunt moved to New York for a trial period.

“She wanted to see if she liked it,” Frances said. “And she asked my mother to go with her.”

Three months later, the aunt decided to move back to Cuba but would first visit family in Tampa.

In Tampa, Milagros reconnected with Joe. They spent another few weeks together until her aunt was ready to go.

“My dad had other ideas,” Frances said. “My mom said yes.” This wedding dress was made from a World War II parachute. (Dirk Shadd/Tampa Bay Times)

She is unclear why her father had the parachute. Was he provided one as an ordnanceman, she wonders, or perhaps grabbed one from the ship as a souvenir?

“I never asked,” Frances said. “I wish I had.” They married at the Hillsborough County Courthouse and a few months later moved to Miami with “$30 in their pockets.”

Joe worked as a handyman and auto mechanic before Eastern Airlines hired him to repair ground support equipment. Milagros stayed home to raise their four children and then worked in an eyeglass factory, pillow factory and elementary school cafeteria.

“They built a great life for themselves and their children,” Frances said. “We weren’t rich but had everything we needed.”

Frances wishes her parents saved the letters they wrote while separated by the Gulf of Mexico, so she could learn how they knew marriage was right after spending so little time together.

“Well, maybe I can figure out why my dad wanted to marry her,” Frances laughed. “My mom was beautiful.”

The cousin shaped the parachute into a dress with a needle and thread. The back is held together by snaps.

“At least they saved this dress,” she said. “This dress is their love story.”