A year after US drone strike killed Afghan civilians, relatives on path to resettlement 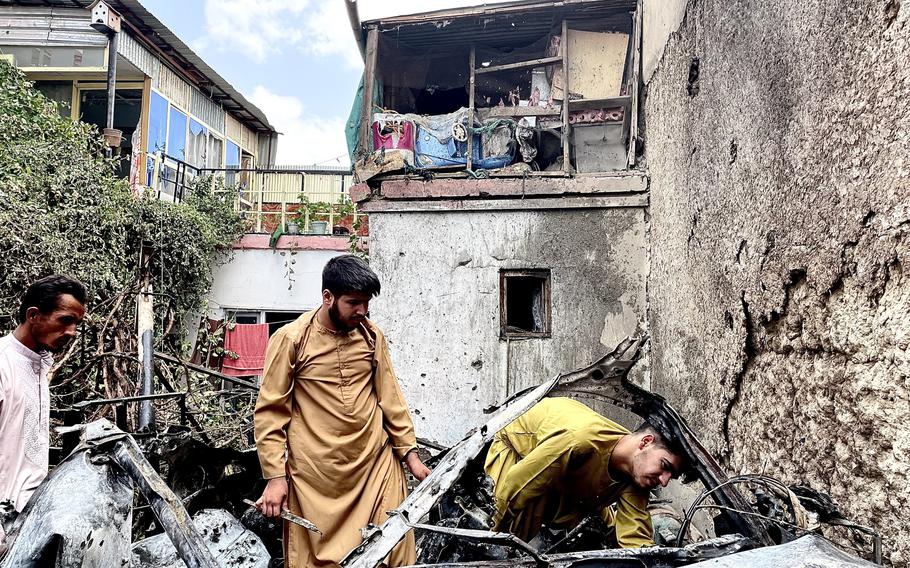 The Biden administration in recent weeks has moved out of Afghanistan nearly four dozen relatives of the 10 civilians killed in a U.S. drone strike last year during the withdrawal from the country, senior government officials and the family said.

The complex relocation process, which is still underway, comes a year after the Biden administration withdrew from Afghanistan, ending 20 years of American warfare there in an exit marred by chaos, desperation and violence.

The killing of Afghan aid worker Zemari Ahmadi and his relatives in Kabul marked a rare instance in which the U.S. government took responsibility for civilian deaths caused by a U.S. drone strike and offered compensation, advocates said.

The U.S. military admitted last fall that it had made a “horrible mistake” when it launched a Hellfire missile on Aug. 29 at Ahmadi’s home, killing him and nine of his relatives — most of them children — under the false belief that it was targeting a member of a terrorist organization, during the final days of the U.S. withdrawal.

Surviving family members told The Washington Post last fall that they were seeking compensation from the Biden administration, as well as help leaving Afghanistan to resettle in another country. “The Americans cannot bring back our loved ones, but they can take us out of here,” Samim Ahmadi, the stepson of Zemari Ahmadi, said last September.

The Pentagon said at the time it would not take disciplinary action against any of the U.S. officials involved in ordering the strike, but that it had made a “commitment to the families, including offering ex gratia condolence payments.”

Former Pentagon spokesman John Kirby said the Defense Department was working with the State Department in support of those family members “interested in relocation to the United States.”

It has taken nearly a year to evacuate most of the family from Afghanistan, and 32 of the 144 relatives whom the U.S. government pledged to help are still there, said Brett Max Kaufman, a senior staff attorney at the American Civil Liberties Union, who is representing the family and Nutrition and Education International, the California-based nonprofit that employed Ahmadi.

“We appreciate the enormous commitment the United States made to our clients, and we are grateful for the many efforts that dedicated individuals inside the Departments of Defense and State have made to bring them to safety,” Kaufman said Monday. “But the bottom line is that the government has not done enough, and many of our clients remain in danger.”

U.S. officials said the process of moving the Afghan family members to safety has required complex international diplomacy, complicated by the precarious and sensitive nature of getting people out of a country where the United States no longer has a diplomatic presence and which is now in the control of America’s former enemy, the Taliban.

But that was not an option for most of Ahmadi’s relatives because they did not have and could not obtain passports, U.S. officials and others with knowledge of the efforts said.

“We could not put them on an airplane because the Taliban don’t permit people to leave without a passport, and the Qataris don’t allow people in without a passport,” said a senior State Department official who spoke on the condition of anonymity due to the sensitivity of the ongoing efforts.

Officials concluded that the only viable way to get most of the family members out would be to move them overland into Pakistan. Then they would need to find another country that would accept them, while the U.S. government vetted and processed them for permanent resettlement.

The Post spoke to seven people with knowledge of the operation, including government officials and family members, most of whom spoke on the condition of anonymity due to the sensitivity of the process. While most of the family has since left Afghanistan, some family members are still seeking a way out.

In February, the senior State Department official traveled to Albania, a European ally that has accepted thousands of Afghans who fled during and after the withdrawal. The official asked the Albanian government if it would allow the United States to bring an additional “large-ish group” of Afghans without passports to the small Balkan nation for processing. The Albanians agreed.

The State Department then spent months negotiating with Pakistan to arrange an exit plan. In late June, Pakistan announced the short-term resumption of a “gate pass” policy, in which Afghans with invitations from foreign destination countries could receive temporary transit visas.

More than 40 members of Ahmadi’s extended family made it across the border last month, and onto a U.S. government-chartered flight to Albania, officials and family members said. An attempt to bring more of the family across on a separate day failed, and they were denied entry, officials and others with knowledge of the situation said.

For those in Albania, the State Department is covering room and board at a secure hotel, while they are vetted and processed to travel to the United States through the refugee resettlement program, the senior State Department official said. A smaller segment of the family is being processed at Camp As Sayliyah, the U.S. Army base in Qatar.

The Biden administration’s tenuous relationship with the Taliban has faced periodic hurdles in recent months over the Taliban’s policies toward women and girls, and the return of al-Qaida to Afghanistan following the U.S. exit.

Kaufman and officials said they remain concerned about finding a path out of the country for the relatives who remain stranded, and whom Kaufman described as “increasingly hopeless by the day and under constant threat from the Taliban.” Kaufman said the family has yet to receive any monetary compensation. A Defense Department spokesman declined to comment.

Steven Kwon, president and chief executive of Nutrition and Education International, said Monday that the recent evacuations came “after months of frustration and lack of progress.”

“However, I remain increasingly scared for the people - including Zemari’s family members and our colleagues - who are still stuck in Afghanistan without any certainty or timeline to get out,” Kwon said in a statement. “The U.S. government must keep its promise and get all those affected by its mistaken drone strike to safety before it’s too late.”

Legal and human rights experts who have tracked civilian casualties in Afghanistan and Iraq, as well as those resulting from U.S. drone and airstrikes outside of official war zones, estimate that hundreds of thousands of civilians have been killed as a result of America’s wars since the 9/11 terrorist attacks.

But the practice of paying compensation to survivors is relatively rare, advocates say, due to a lack of transparency in the U.S. government’s use of covert drone strikes, and the absence of thorough investigations in locations that are often hard for human rights monitors to reach.

The drone strike last August was unusual in that it killed civilians in Afghanistan’s capital amid a heavily scrutinized U.S. withdrawal and evacuation effort that was already heavily chaotic and violent. Nutrition and Education International also publicized surveillance video that showed Ahmadi hauling large cans of water for his family shortly before the attack.

The U.S. military later said that it had mistakenly believed it was targeting an operative transporting explosives from a safe house belonging to the Islamic State-Khorasan, the Afghanistan and Pakistan arm of the Islamic State. The strike came three days after a suicide bomber affiliated with ISIS-K detonated a bomb amid a crowd of Afghans outside the Kabul airport. That attack killed nearly 200 Afghans and 13 U.S. service members helping Afghans evacuate.

After the U.S. military investigation of the drone strike, Defense Secretary Lloyd Austin hailed Ahmadi as a man who provided “care and lifesaving assistance” through Nutrition and Education International, which has worked to alleviate hunger and malnutrition in Afghanistan.

The Washington Post’s Ted Muldoon in Albania contributed to this report.