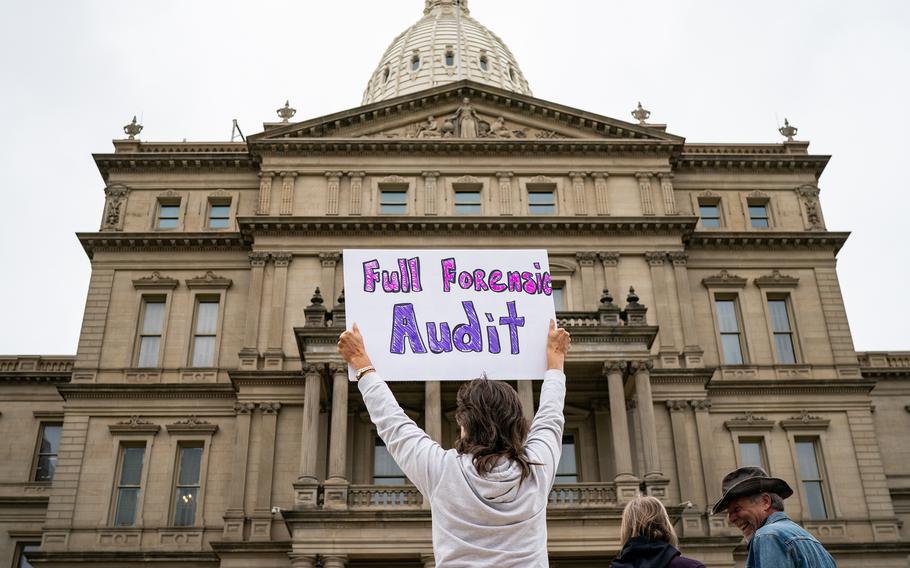 Supporters of former president Donald Trump gather for a rally at Michigan State Capitol in Lansing in October 2021 to demand a forensic audit of the 2020 election. (Salwan Georges/The Washington Post)

Eight months after the 2020 presidential election, Robin Hawthorne didn’t expect anyone to ask for her township’s voting machines.

The election had gone smoothly, she said, just as others had that she’d overseen for 17 years as the Rutland Charter Township clerk in rural western Michigan. But now a sheriff’s deputy and investigator were in her office, questioning her about her township’s three vote tabulators, suggesting that they somehow been programmed with a microchip to shift votes from Donald Trump to Joe Biden and asking her to hand one over for inspection.

“What the heck is going on?” she recalled thinking.

The surprise visit may have been an “out-of-the-blue thing,” as Hawthorne described it, but it was one element of a much broader effort by figures who deny the outcome of the 2020 vote to access voting machines in a bid to prove fraud that experts say does not exist.

In states across the country — including Colorado, Pennsylvania and Georgia — attempts to inappropriately access voting machines have spurred investigations. They have also sparked concern among election authorities that, while voting systems are broadly secure, breaches by those looking for evidence of fraud could themselves compromise the integrity of the process and undermine confidence in the vote.

In Michigan, the efforts to access the machines jumped into public view this month when the state’s Democratic attorney general, Dana Nessel, requested a special prosecutor be assigned to look into a group that includes her likely Republican opponent, Matthew DePerno.

The expected GOP nominee, Nessel’s office wrote in a petition filed Aug. 5 based on the findings of a state police investigation, was “one of the prime instigators” of a conspiracy to persuade Michigan clerks to allow unauthorized access to voting machines. Others involved, according to the filing, included a state representative and the sheriff in Barry County, Dar Leaf.

Although Hawthorne rebuffed the request by investigators to examine one of her machines, a clerk in nearby Irving Township handed one over to the pair despite state and federal laws that limit who can access them. About 150 miles north of Hawthorne’s township, three clerks in two other Michigan counties turned over voting machines and other equipment to third parties, public records show.

Officials got the tabulators back weeks or months later, in one instance at a meeting in a carpool parking lot.

DePerno has denied any wrongdoing, as has Leaf, the Barry County sheriff. DePerno’s campaign issued a statement calling the petition for a special prosecutor “an incoherent liberal fever dream of lies.”

Once election officials lose control of voting machines, the machines can no longer be used because of the risk of hacking. What’s more, voters can lose faith in the country’s electoral infrastructure when they hear about machines that haven’t been adequately protected, election experts warn.

Until recently, said Tammy Patrick, who works with election officials around the country as a senior adviser at the nonprofit Democracy Fund, “it seemed far-fetched that election networks could be exposed” in the way they were in Michigan.

“Unfortunately, we have a number of instances in the last year or so where this sort of thing has happened around the country,” she said. “It is deeply troubling.”

Michigan Secretary of State Jocelyn Benson said in an interview with The Washington Post that efforts to “twist the arm of election officials to get them to turn over secure information” are illegal.

She said it’s important for law enforcement to act “not just to hold accountable those who have been trying to interfere with the process but to look at the connectivity to see if there’s a broader connection, not just in our state, but beyond Michigan to Georgia and Ohio and other states where you see this happening.” 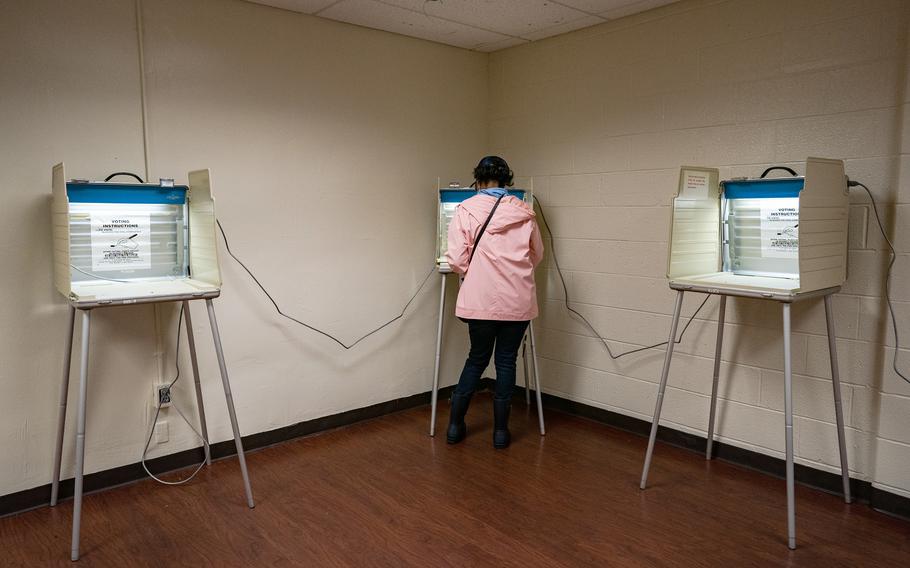 Although the exact nature of connections between efforts in different states to breach machines remains unclear, the situation in Michigan is similar to ones elsewhere in which allegedly unofficial, unauthorized investigators sought evidence of fraud by gaining access to voting equipment. Some of those named in the Michigan case have been connected to cases elsewhere.

In Colorado, the Mesa County clerk, Tina Peters, was indicted in March on charges stemming from her effort to allow allegedly unauthorized people to copy the hard drives of voting machines in her county. Peters has denied wrongdoing. In Coffee County, Ga., a cybersecurity executive named in the Michigan case, Benjamin Cotton, said in court filings that he had gained access to the Georgia county’s voting system information.

In Pennsylvania, the secretary of state ordered the decertification of machines in Fulton County after she said they were improperly accessed by individuals seeking to investigate the 2020 election.

Election experts are worried that in some of these intrusions, voting tabulators may have been compromised or the exposure of serial numbers and other details about voting systems could make them more vulnerable to fraud. More broadly, they said, these instances undermine trust in voting.

For months, few knew about the review of voting machines by Leaf, the Barry County sheriff, who belongs to a “constitutional sheriffs” association that contends sheriffs must answer to voters but not state or federal authorities. Leaf’s team told clerks to keep their visits quiet, according to clerks.

Barry County Clerk Pamela Palmer learned of the investigation in June 2021 and confronted Deputy Sheriff Kevin Erb and investigator Michael Lynch to ask why she hadn’t been told about their work.

“They said, ‘Well, we’re kind of doing this under the element of surprise.’ I said, ‘What have you got to hide?’ So that’s kind of what started it all,” Palmer said.

Reuters last month first reported on the scope of Leaf’s investigation and Palmer’s challenge to it.

Barry County’s top prosecutor, Julie Nakfoor Pratt, met with Leaf and his attorney, Stefanie Lambert, as well as others last summer to find out what they were doing. Lambert pressed Pratt to issue search warrants and tried to shape how she handled the case, Pratt said. Pratt said she told Lambert that Leaf hadn’t demonstrated he had probable cause to inspect the voting machines.

In a written statement, Lambert said the group’s inquiries into voting machines were appropriate. Her statement echoed ones issued by DePerno and Logan that criticized the attorney general.

“Legitimate investigations on behalf of elected constitutional officers in the course of determining whether there was election day fraud is not a crime,” Lambert said in her statement.

Hawthorne, the clerk from Rutland Charter Township, was baffled by the theories presented to her during her meeting with Erb and Lynch about votes being shifted from Trump to Biden in a county that Trump won by a nearly 2-to-1 margin.

“They seem to think there was some kind of microchip in our tabulators that was throwing votes to Biden,” Hawthorne said. “But Trump won Barry County. He won by 65% of the vote, so I don’t know where they’re thinking that any kind of chips were in any of our machines or thinking that something had happened to them. The whole thing is nutty. It’s nutty, totally nutty.”

The clerks willingly gave up their voting equipment to someone described only as Person 1 in a letter from Chief Deputy Attorney General Christina Grossi.

After Roscommon County Clerk Michelle Stevenson handed over a tabulator and flash drives, she began to question the authority of the investigation. A state representative — unnamed in Grossi’s letter — told Stevenson she was doing the right thing and assured her that her name would never come up.

Those who obtained the voting machines held onto them for weeks or months, causing the clerks to grow “apprehensive,” Grossi’s letter explains. The machines were returned in meetings at a shopping center and carpool parking lot.

Leaf is continuing his work and in June asked a state court to take the extraordinary step of halting the attorney general’s investigation into his efforts to prove fraud in the 2020 election. Last month at a Las Vegas conference of the Constitutional Sheriffs and Peace Officers Association he lamented that he had not persuaded Pratt, the county prosecutor, to pursue search warrants.

“We’re going to keep moving forward, folks. We’re not done with this,” Leaf said, suggesting he might seek to prosecute alleged election fraud using a common-law grand jury, an unofficial body that some claim can issue indictments.

Nessel’s request for a special prosecutor — intended to avoid a conflict of interest because her opponent is among those being probed — may mean any attempt to pursue charges in the voting machine breach investigation could move slowly. The Prosecuting Attorneys Coordinating Council in Michigan, which assigns special prosecutors in cases of conflict of interest, can take up to 90 days to arrange for a prosecutor to step in, said Cheri L. Bruinsma, the council’s executive director.

On Friday, the Brennan Center for Justice at New York University School of Law sent a memo to organizations representing thousands of local election officials nationwide advising them of the growing problem of machine breaches and how to respond to it.

“Public confidence in future elections can be severely damaged by plausible allegations that unauthorized or biased actors have been given physical access to voting equipment,” the memo says.

The memo urges officials to have a plan in place to quickly investigate possible breaches of voting machines and to replace or decommission election equipment if needed. The memo recommends practices to prevent such tampering, including closely restricting access to election systems, instituting background checks on those who have access and installing surveillance cameras.

“It’s super important for election officials to know these breaches of election security are occurring and that there have been swift and strong reactions to it,” said Lawrence Norden, director of elections and government for the Brennan Center. “We want to be sure local election officials know they have an obligation to detect and quickly take remedial action if a breach occurs.”

Hawthorne, the clerk in Rutland Charter Township, said she and other clerks in Michigan are trained never to give up their voting machines. She said was shocked to hear some had handed them over and stunned that Leaf, the sheriff in her county, was spending so much time on what she considers a misguided investigation.

“He thinks that there’s some kind of massive thing going on in Barry County, which I don’t understand,” Hawthorne said. “We’re just a tiny little county in Michigan. We can’t really affect the voting results in any way, shape or form.”

The Washington Post’s Emma Brown contributed to this report.