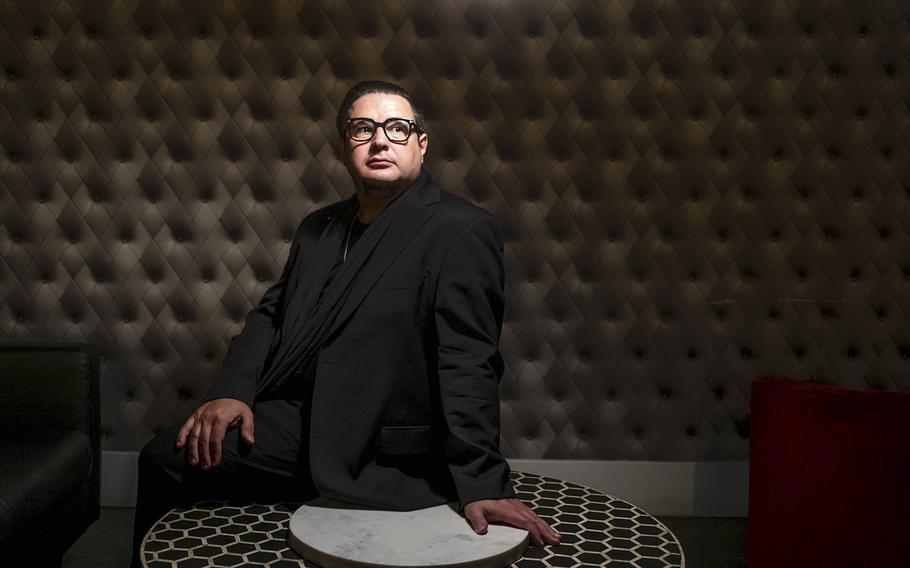 Eugene Mayskyn, a member of WeHo’s Russian Advisory Board, is seen in Los Angeles on August 9, 2022. West Hollywood has long honored its significant Jewish Russian population, but now they face an unusual crisis: What to do about its annual Russian Culture month as Russia pounds Ukraine and destroys communities? (David Crane, Los Angeles Daily News/SCNG)

(Tribune News Service) — For decades, West Hollywood has been known as a hub of the Russian diaspora. Restaurants and stores offered potato pirogies, marinated mushrooms and an assortment of flavored vodkas. Signs in Cyrillic adorned doctor’s offices, pawnshops and grocery stores where Russian TV channels played music and news. Every May the city has celebrated Russian Arts and Culture month, hosting concerts and exhibitions.

But in the months since the Kremlin launched a full-scale invasion of Ukraine, West Hollywood has faced a dilemma: How to celebrate Russian culture when Moscow is leveling Ukraine’s cities?

“It turns out the word ‘Russian’ triggers some people,” said Tatyana Rodzinek, West Hollywood’s Russian community programs coordinator during the city’s Russian-Speaking Advisory meeting via Zom on July 19. “It’s not a good idea to cancel any events. Russian culture is still here. But based on the latest experience, it turns out the word ‘Russian’ stops people from attending and participating in the events.”

Since 2001, the city has hosted the Russian Arts and Culture Festival, inviting singers, dancers and vendors who sold Eastern European street food. But this year, worrying that the concert would turn into a political rally, organizers decided to rename West Hollywood’s “Russian Arts and Culture Festival” the “WeHo Fundraiser for Refugees from Ukraine.”

The change has triggered a backlash on both sides, said Rodzinek in an interview. Some guests, vendors and performers criticized event organizers for not distancing themselves enough, while others were frustrated that West Hollywood dropped the word “Russian” from an event the city has hosted for 20 years.

But Board Member Raisa Aguf argued that the new name and use of the word “Russian” would “irritate someone again.”

Diana Volman, another board member, said, “We should get rid of the trigger words which could make people feel resentful.” Volman said the board should keep the word “festival” but remove the word “Russian.” By removing “Russian,” she said, the city could still host the festival without “reproaching anyone and doing anything that is unpleasant for people to be part of.”

When Aguf suggested naming the event “Festival of Friendship of People of West Hollywood,” Volman said that in light of current events, it would sound like “a spit in the face” to non-Russians.

“It seems to me that we’re trying to hide and we are ashamed of the fact that we speak Russian,” he said. “We all are immigrants here. We arrived a long time ago. We have nothing to do with Putin’s politics, the war in Ukraine. I’m proud of my Russian culture.”

The dilemma facing the Russian-speaking Advisory Board in West Hollywood is reflects the uneasiness that Russian-speaking immigrants of different ethnic backgrounds have faced since the war broke out.

While the debate in West Hollywood is public, the discussion is also underway in Southern California communities that attracted tens of thousands of Russian and Ukrainian immigrants over the years, from Simi Valley, Tarzana and Sherman Oaks, to Newport Coast and Seal Beach. SeeCalifornia.com points out that the U.S. Census in 2010 put the number of Russian-speaking residents in California at 1.1 million.

Gary Rapoport, a real estate agent from Burbank who is not part of the West Hollywood Russian Advisory Board, said the question of identity shifted for him after his native Odesa became a target of intense shelling by Russian troops. Rapoport, who says he is half-Russian and half-Jewish, said that after the war began he started identifying himself as a Ukrainian.

“I developed a dislike for everything Russian, unfortunately,” he said.

He grew up in a Ukrainian city where the Russian language was widely spoken, he said, and he couldn’t believe his eyes when he saw Russians attacking his hometown Odesa.

“I felt lost,” he said in Russian. “I couldn’t believe Russians could fight Ukrainians.”

Still, he said, it was Russia’s full responsibility because their government started the bloody war.

“Who chose Putin?” He said. “Russians chose their leader and he is their representative. If they disagreed with his policies, they wouldn’t choose him.”

It was “Russian wives and mothers who allow their husbands and sons to go on and kill Ukrainians,” he argued. “If you were against it, you wouldn’t allow them to go to war.”

But Angela Schmidt, a Huntington Beach-based attorney who grew up in the now war-torn Donetsk region in eastern Ukraine, said she wouldn’t link any of her Russian-speaking friends to what is happening in Ukraine.

Schmidt, who is half-Ukrainian and half-Russian, has relatives in Donetsk where fierce fighting is underway. She says the hate between Russians and Ukrainians is artificial.

“I disagree that Russians are being blamed for what’s happening in Ukraine,” she said. ”Russians are not bad, it’s just their leader is terrible.”

Alyona Koolhaas, who moved from Kyiv 22 years ago and now lives in Las Flores in Orange County, said she never felt pressure to identify as a Russian or Ukrainian.

“I’m a Ukrainian, but I have the right to speak Russian,” she said.

Still, taking sides in the Russian-Ukrainian conflict has impacted not just individuals but businesses as well.

The Polish National Opera recently dropped the production of Mussorgsky’s “Boris Godunov” in support of Ukraine. Prominent Russian conductor Tugan Sokhiev recently resigned from Bolshoi Theater in Moscow after calls to condemn the war in Ukraine.

The Russian Documentation Center in West Hollywood, which provides notary services, became the “Rush In Documentation Center.” A group that organizes Russian parties and karaoke nights, LA Banda Ru, temporarily put its events on hold during the spring due to the situation in Ukraine — to avoid clashes between their guests.

Paul D’Anieri, professor of political science and public policy, at University of California, Riverside, said the issues the Russian community face are tricky.

“To put it a little bit too simply ‘Russian’ has suddenly become a bad word,” he said.

“A lot of different people and organizations are trying to make it clear that they do not support Russia’s war and imperialism,” he said. “The question is, in doing that, how do you relate to things that are Russian?”

When it comes to Russians who are against the war, D’Anieri said, “Russians living overseas have been put in a position where they are expected to speak out, take a position against the war. … That’s not necessarily a fair position to put individuals in.”

On the other hand, he said, “A lot of friends and colleagues in Ukraine feel very strongly, and actually think there’s good reason to believe this: ‘One reason this war is happening is because Russian people support it.’ And that the Russian people, therefore as a citizenry, are collectively responsible.”

Jared McBride, an adjunct history professor at UCLA, said the city of West Hollywood is facing a unique challenge because it’s one of the few remaining Russian-speaking communities in the region. Over time, as immigrants and their families disperse to other communities, West Hollywood’s Russian-speaking population has dropped to 3,870, about 30% less than in 2000, according to a city study.

“It’s almost a challenge inside of another challenge,” McBride said. “Even without the war, you would wonder, what would be left in 10 or 20 years? There’s nothing to rebrand” with names that don’t mention Russia, “because there’s no one there.”

Regardless of the dwindling population, West Hollywood Russian-Speaking Advisory board member Alex Tolocenco said that the city’s traditional Russian Arts and Culture festival is about arts and culture — and only because politics have changed and public opinion has shifted, “We are ready to hide like mice under the rock.”

Tolocenco argued at the city’s lengthy Russian Advisory Board debate in July that while expats from former Soviet republics had their own culture, it’s hard “to deny that we all are united by the Russian language.” He added that people immigrated to the United States “because they disagreed with the politics of the Soviet Union and communism. Should we call it a festival of refugees of the Soviet Union?”

“We need to respect and honor our traditions and not bend based on today’s politics,” Tolocenco said. “Russian language and Russian traditions will always remain, no matter what. The traditions survived the Tsar, and the Soviet Union, and they will survive Putin. I’m against war, any military action, violence and murder. But I’m for Russian culture and I’m not going to hide.”

But Rodzinek, West Hollywood’s Russian community programs coordinator, said that by renaming the Russian Arts and Culture Month,” the board didn’t necessarily abandon Russian culture. Following this year’s festival, she added, “We noticed this year that opinions became polarized” as other ethnic groups said “Russian culture was not their culture.”

After listening to Tolocenco’s arguments at the Russian Advisory Board in July, Rodzinek said she decided to continue the discussion about rebranding the Russian Arts and Culture Month, and possibly invite a marketing professional to help the board figure out a new name.

When speaking about rebranding, D’Anieri of Riverside UC said, it’s important to keep in mind the interests of another group that’s been mostly impacted by the war: Ukrainians.

“There is an argument that Russians in the United States might make: ‘We just want to be left alone,’ and that’s what Ukrainians may bitterly say: ‘All we wanted was to be left alone.’”