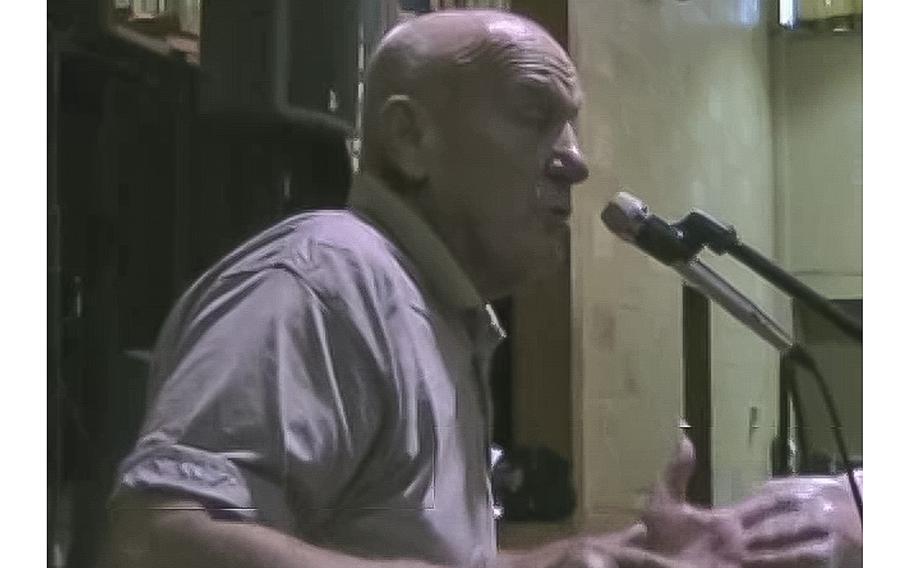 The Rev. Carl Kabat, a tireless opponent of nuclear weapons whose decades of protests included damaging warhead nose cones with a group known as the Plowshares Eight that gave new focus to the disarmament movement, died Aug. 4 in San Antonio. He was 88.

The death was announced by the Oblate Madonna Residence, a senior community home affiliated with Kabat's religious congregation, the Missionary Oblates of Mary Immaculate. No cause was given.

Kabat was repeatedly jailed - spending a total of nearly 20 years in jail since the 1970s - but remained steadfast in his belief in civil disobedience and symbolic vandalism to bring attention to the threats from nuclear arsenals.

Much of his influence came from his unbending commitment to public protests, even as his health declined, and a defiant spirit with a touch of sly wit. He verbally dueled with judges in court - calling some "brother" instead of your honor - and sometimes broke into military bases dressed as a clown, an homage to Saint Paul's admonition in Corinthians to be valiant yet humble: "We are fools for Christ."

"You have to put yourself where your words are," Kabat said in a 2010 interview. "Otherwise you're just kind of like flapping your jaws."

While assigned to an Oblate mission in Brazil from 1968 to 1973, Kabat was introduced to developing currents in religious activism through liberation theology and its emphasis on economic and social justice. A crystallizing moment for Kabat came as he contrasted the grinding poverty in parts of Brazil with the huge money spent on arms by the richest nations.

After returning to the United States, he found a home among anti-nuclear demonstrators, drawing personal inspiration from Vatican statements against the arms race and nuclear war, including Pope John XXIII's 1963 encyclical "Pacem in Terris," or "Peace on Earth."

Kabat started big. On the White House portico and outside the Pentagon in 1978, he splashed human blood, which would become a hallmark of many of his protests over the decades. In 1980, he then gained national attention as part of what became known as the Plowshares Eight, a group that entered a General Electric facility in King of Prussia, Pa., and used claw hammers to damage part of the nose cones on Minuteman missiles and pour blood on documents in the plant.

The trial became a rallying point for the nuclear-disarmament movement, with star defendants, antiwar clerics the Rev. Daniel Berrigan and his brother, the Rev. Philip Berrigan. The group took its name from the biblical lines of nations one day beating "swords into plowshares."

The proceedings also were an ideological tug of war. Prosecutors tried to stick to the burglary and other charges at hand, while the Plowshares Eight sought to make the trial a question over the morality of nuclear weapons and their threats to humanity.

"Nuclear warfare is not on trial here - you are," said an exasperated Judge Samuel Salus II. (A 1982 film, "In the King of Prussia," starred Martin Sheen as Salus with Kabat and the other defendants playing themselves.)

The Eight were convicted and given sentences up to 10 years. (Kabat received three to 10 years.) They all appealed and were paroled in 1990, covering any previous jail time served. Meanwhile, Plowshare groups were formed throughout the country for anti-nuclear protests, occasionally copying Kabat's use of blood as a vivid display of dissent.

"That first Plowshares action set off a chain reaction," wrote Frida Berrigan, the daughter of Philip Berrigan from a relationship with a Catholic nun that led to their excommunications from the Catholic Church, though they were later reinstated.

"People are attracted to, and inspired by, the alchemic mixture of symbolic disarmament and real transformation that carries through the action, jail witness, courtroom saga and time in prison," said her 2020 essay.

Carl Kenneth Kabat was born Oct. 10, 1933, on a farm in Scheller, Ill., the third of five children. He began pre-med studies at the University of Illinois but never felt it was his calling, his sister, MaryAnn Radake, told the National Catholic Reporter.

He decided to leave school and follow his brother Paul to the Oblates, a global religious community founded in the early 19th century in France with a focus on helping the poor. Kabat was ordained in 1959, a year after his brother.

He was assigned to the Philippines in 1965 and then Brazil, where he came under the influence of liberation theology thinkers such as Joseph Comblin. But Kabat's increasing outreach to the poor in Recife brought warnings from Brazil's military dictatorship, said his sister.

He was moved back to the United States and built ties with groups such as Pax Christi USA, Amnesty International and the Catholic Worker Movement.

For many years, Kabat led a revolving-door life of protest, arrest, trial and jail - and then back again to protests. There were periods of tensions with Oblate leadership, but Kabat managed to keep his activism alive.

In 1984, he and three others, including his brother Paul, cut through a chain-link fence and used a rented jackhammer to damage the cover of a nuclear missile silo at Whiteman Air Force Base outside Knob Noster, Mo. They then sat in a circle, singing and holding hands. Kabat was sentenced to 18 years in prison and served 10.

Kabat and two others, dressed as clowns, disabled a missile silo cover in 2006 at Minot Air Force Base in North Dakota, pouring their own blood on the site; Kabat was sentenced to 15 months in prison. Three years later, he cut through the fence around a Minuteman III nuclear missile silo outside Greeley, Colo. - one of several such incursions in Colorado over the years - and unfurled antiwar banners.

"I thought, 'What a beautiful place this is except for this damnable thing in the ground that could kill 2 or 3 million people,'" he said later in a jailhouse interview with the New York Times. He was convicted and sentenced to 137 days, the time he already served behind bars.

Survivors include a sister, MaryAnn Radake of Tamaroa, Ill., and nieces and nephews.

After one of his last major protests, in 2016 - splashing red paint on an entry sign at the National Security Campus in Kansas City, Mo. - he appeared in Kansas City Municipal Court leaning on a cane. He had only limited vision in his right eye after complications following lens surgery while in prison years before. Still, he remained in feisty form, acting as his own attorney.

He cross-examined security guard John Falcon, the chief witnesses against him from the Honeywell-linked facility. Kabat asked whether he was old enough to remember the Hiroshima atomic bombing in 1945. The prosecution objected.

Judge Katherine Emke asked whether he had any more witnesses. Kabat didn't miss a beat, reaching back to President Dwight Eisenhower's 1961 warnings about the influence of the "military-industrial complex."

"Yeah," he told the judge. "Eisenhower."