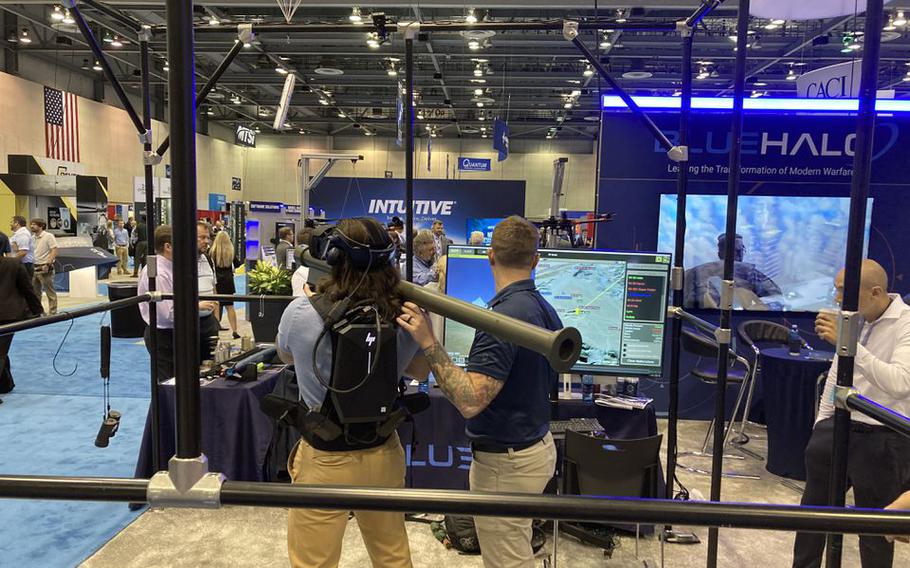 Virtual training was a big topic at the Space & Missile Symposium in Huntsville, Ala., this week. Here, a symposium attendee tries his hand at using a shoulder-mounted missile to take out virtual opposition at the Blue Halo booth. (Lee Roop / lroop /TNS)

(Tribune News Service) — This week’s Space & Missile Defense Conference in Huntsville is the 25th annual one, and regulars say it sometimes feels like a high school reunion to see friends and colleagues from past conferences on the big display floor.

They were especially glad to see each other this year as the pandemic eased enough to make the event seem more like normal. But this isn’t any reunion. It’s filled each year with briefings from the nation’s top military leaders on future needs and plans and booth after booth of systems, devices and simulators for demonstrating new defense technology.

Here are few of the companies that work with military commands in Alabama to bring that technology to this year’s conference and support Huntsville’s defense industry and the Army commands at Redstone Arsenal.

Blue Halo is a privately owned defense and intelligence company based just outside Washington in Arlington, Va., but it has teams working in Huntsville on space defense, air missile defense, cyber security and “counter-intelligence.”

One of its products is a fully autonomous “swarm of drones” that communicate with each other to detect and defeat enemy drones on a battlefield. It’s called the “Hive program” and all of the company’s drone design and manufacture is done in Huntsville. At the show, Blue Halo’s popular training “room” let customers step into a virtual room and fire a shoulder-held missile at various threats in a simulation.

MOOG is a 63-year-old company active in “space, missiles and military ground systems” and its main selling point is “precision motion control.” The company’s founder invented the “precision servo valve” that’s a key part of multiple systems in multiple vehicles. When the pilot lowers the flaps to land Boeing 737 flight, for example, he or she is pushing down on a servo valve invented by MOOG.

The company is competing now in Huntsville to build the turret that will go atop future Army field vehicles. For the symposium, it put everything on a big display turret: guns, missiles and lasers. The Army can pick the combination it needs and hire or train staff accordingly.

Parsons is a global technology company with several thousand employees in Huntsville teamed with the Missile Defense Agency (MDA). 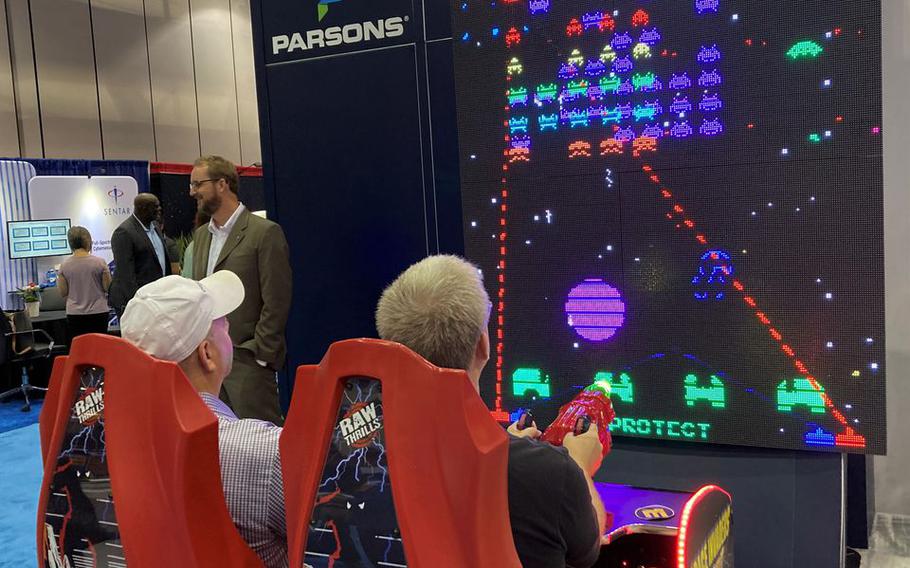 Parsons technology company just "went for it" and brought a life-size "Space Invaders game to its booth at this week's Space & Missile Symposium in Huntsville, Ala. (Lee Roop / lroop /TNS)

Huntsville lead James Lackey said the company is active designing weapons systems for MDA on Redstone Arsenal and satellite communications equipment that works ground-to-space and back. Satellites for communicating, tracking and performing other missions are increasingly numerous and critical to future defense, and they face “classified threats” that Parsons is also working to solve.

Parsons also brought what might have been the most popular booth attraction: a life-size Space Invaders game with side-by-side seats where gamers could fight wave after wave of aliens with bad intent. Just like in the late 1970′s version before some of them were born.

ENERCON is working on the THAAD missile system (Terminal High Altitude Area Defense) designed to shoot down ballistic missiles fired at America or its military installations.

ENERCON in Huntsville is an example of a familiar local structure. Based in Maine, it has 100 people in Alabama working directly THAAD. The missile is assembled in Troy, Ala. by Lockheed Martin. Its radar is supplied by Ratheon and its cooling equipment is supplied by Teledyne.

At the symposium, the company was showing its big mobile power unit for the system the Army will rely on in future field operations..