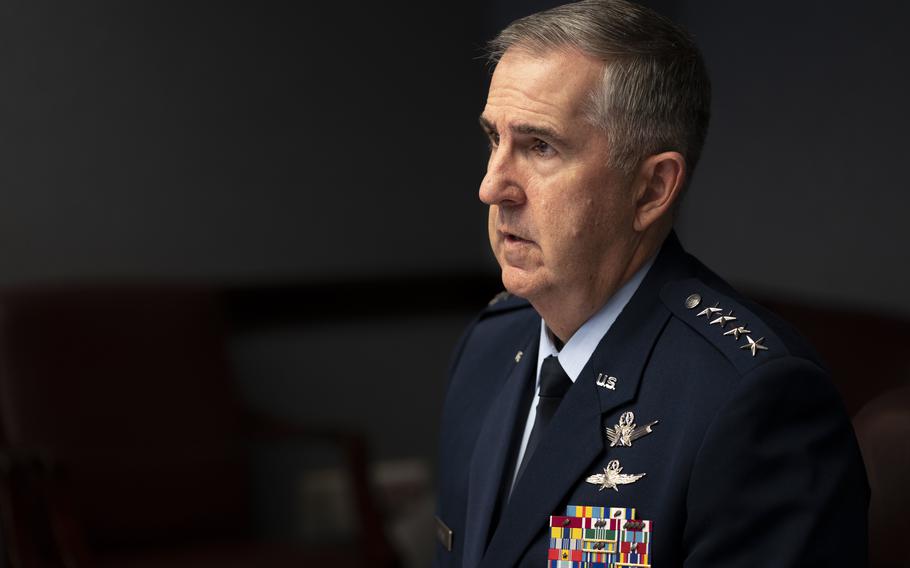 Then-Air Force Gen. John Hyten, who served as vice chairman of the Joint Chiefs of Staff, speaks in January 2021 during a National Security Space Association event at the Pentagon. (Carlos M. Vazquez II/Department of Defense)

WASHINGTON — An Army colonel can continue her civil lawsuit against the federal government and former Air Force Gen. John Hyten for an alleged sexual assault after a federal court of appeals on Thursday ruled the law that bars service members from suing the government for injuries does not apply to such a case.

The Ninth Circuit Court of Appeals issued its decision after lawyers for Hyten, who served as vice chairman of the Joint Chiefs of Staff, and the federal government appealed a lower court's decision to deny their request to dismiss a suit brought by Army Col. Kathryn Spletstoser alleging Hyten sexually assaulted her, according to court documents.

She filed her case against Hyten and the government after reporting her assault to the Air Force, which investigated the incident but declined to file charges or discipline the general, according to court documents.

Spletstoser claims the sexual assault occurred while she and Hyten were attending a defense forum in California. Though she was on active duty, she was not working at the time because it was “late in the evening.” As she was preparing her hotel bed, she said the general unexpectedly knocked on her door, restrained her and sexually assaulted her.

Hyten’s and the government’s attorneys argued the Feres doctrine, which states a service member cannot sue the government for injuries received on active duty, should nullify Spletstoser’s case.

The appeals court found the doctrine does not cancel Spletstoser’s right to sue because the “alleged sexual assault (could) not conceivably serve any military purpose.”

“It is unimaginable that plaintiff would have been ‘under orders’ to submit to Hyten’s sexual advances, or that she was performing any sort of military mission in conjunction with the alleged assault,” the court wrote in its opinion.

The court did not rule on any allegations of the case. However, the ruling will now allow Spletstoser to move forward with her civil lawsuit.