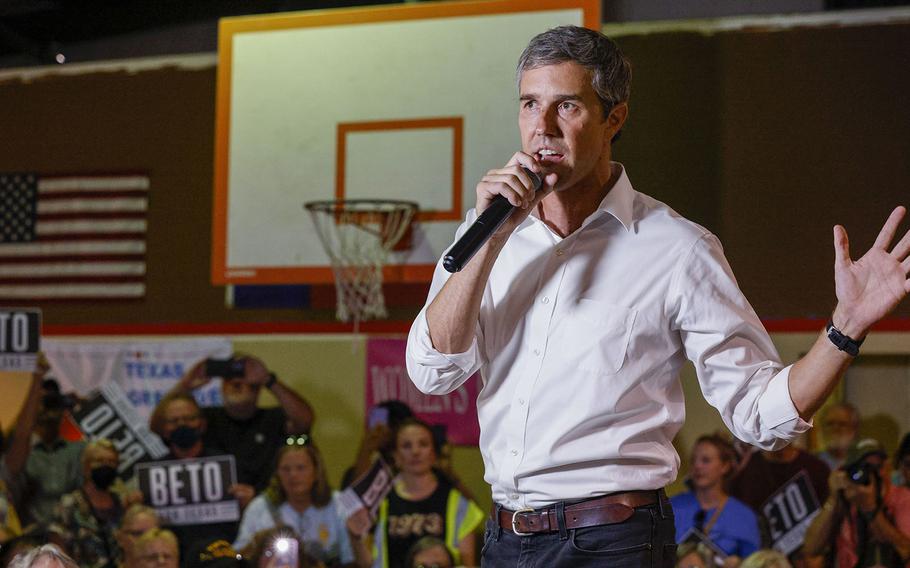 Texas candidate for governor Beto O’Rourke speaks during a town hall at the Kauffman Leadership Academy in Cleburne, Texas, on Wednesday, Aug. 10, 2022. He also held a rally Wednesday in Mineral Wells, where he cursed at a heckler while discussing gun control in the wake of the Uvalde school shooting. (Elías Valverde II/Dallas Morning News/TNS)

DALLAS (Tribune News Service) — Beto O’Rourke is defending the F-bomb he dropped Wednesday night while confronting a heckler who he said was laughing during his remarks about the Uvalde mass shooting that killed 19 elementary school students and two teachers.

The incident occurred during a rally in Mineral Wells as O’Rourke began talking about the need to curb mass shootings like the one that happened May 24 at Robb Elementary School. A man in the crowd could be seen and heard laughing as O’Rourke talked about Uvalde, prompting the Democratic nominee for governor to respond with an expletive.

The moment caused a stir on social media, and the Democrat’s campaign addressed it.

“There’s nothing funny about 19 kids being shot to death in their classrooms, and there’s nothing okay about refusing to act so it doesn’t happen again,” said Chris Evans, O’Rourke’s chief spokesman.

In a tweet after the Mineral Wells rally, O’Rourke defended his stance.

“Nothing more serious to me than getting justice for the families in Uvalde and stopping this from ever happening again,” he tweeted.

Though O’Rourke was criticized for using expletives on the campaign trail during his race against Sen. Ted Cruz in 2018, the Mineral Wells crowd applauded wildly after the moment Wednesday night.

O’Rourke, a former El Paso congressman, is running for governor against incumbent Republican Gov. Greg Abbott. The Uvalde massacre has been a flashpoint in the campaign, with emotions high over mass shootings in El Paso and elsewhere in Texas. During a news conference after the shooting, O’Rourke confronted Abbott and was escorted out of the room.