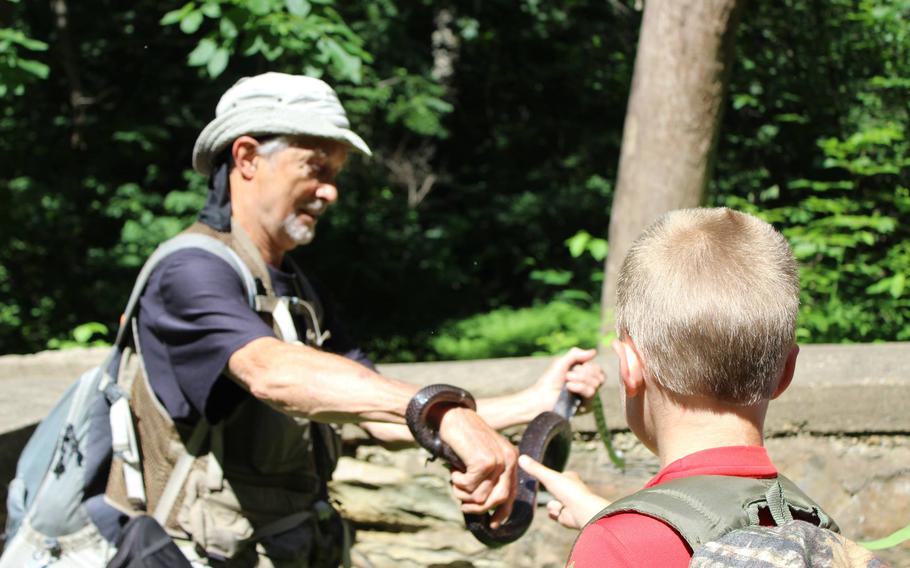 In this undated photo, William ‘Marty’ Martin shows a snake to a child attending a herpetology camp at Bull Run Mountains Conservancy in Broad Run, Va. near Washington, D.C. (Facebook)

William “Marty” Martin, a naturalist who turned a boyhood fascination with snakes into a career as a leading authority on the eastern timber rattlesnake, combing Appalachia and beyond for decades to track rattler populations and threats from climate change and human encroachment, died Aug. 3 in Shepherdstown, W.Va. He was 80.

The cause was complications after being bit by a captive rattler at his home and research facility, said his daughter Claire Martin.

Mr. Martin gained his expertise in the eastern timber rattlesnake in the woods and rock fields, largely alone. From spring’s first thaw to winter’s first blast, he spent most of his time trekking to known snake dens and hunting for new groups of timber rattlers - one of about 30 venomous species in the United States, with a habitat that ranges from eastern Texas to New England.

Mr. Martin had a special interest in the mountains and piedmont from Pennsylvania to Virginia, even at times snake hunting around the edges of Washington’s Beltway. He was a familiar figure along the Appalachian Trail and other paths, a wiry 5-foot-7 bushwhacker wearing his trademark mesh angler’s vest and toting a snake sack and pole called a snake hook.

“The ambassador of rattlesnakes,” the nature site Terrain.org dubbed him in a 2019 profile.

Merging science and education, he tried to peel away some of a cultural stigma that surrounds snakes. He also sought to stir a healthy respect for rattlers and their place in the ecosystem and even American history such as the snake depicted on the “Don’t Tread on Me” Gadsden flag from the Revolutionary War.

He was quick to point out that timber rattlers rarely strike without a provocation, such as being inadvertently stepped on. Deaths from snake bites are rare in the United States. About 3,000 snakebites are reported to U.S. poison centers every year, but fewer than 10 are fatal, according to the University of Virginia.

“There was a time when scientists identified animals as good or bad to man,” Mr. Martin told the Baltimore Sun in 1993, noting that rattlers help control rodent populations. “We don’t look at things like that anymore.”

His research was nearly all independent, distinguishing him from colleagues affiliated with universities or institutions. Mr. Martin modeled himself more on earlier explorers of the natural world, such as renowned birder Florence Merriam Bailey, who built their credentials doing field work.

Mr. Martin supported his work through temporary contracts, including projects tracking snake populations in a warming ecosystem. (He was also bitten several times along the way.)

Somewhat counterintuitively, hotter seasons are not necessarily an advantage for coldblooded species such as snakes, which rely on the sun and ambient warmth for body heat. Temperatures too high can disrupt snakes’ feeding, reproduction and other cycles by forcing them to spend more time in rock crevasses and other places to avoid overheating.

The timber rattlers, like many other species, also face dwindling habitats as exurbs and roadways press into hills and hollows. But other animals often have greater abilities to adapt.

Timber rattlers mature slowly, and females don’t give birth every year. The snakes typically never slither more than a few miles from their birth den. Timber rattlers are listed as endangered in several northern states and Virginia.

“You’ll probably want to stay right behind me from here on,” Mr. Martin told a Washington Post journalist in 2002 while on a snake-seeking hike in Shenandoah National Park.

They approached a den. Mr. Martin counted 24 rattlers, coiled and basking in the sun. He took notes on their size and general health. Then, with a swoop of his snake pole, he snagged a 37-incher, about average size. He did it in a bit of serpent showmanship for the reporter.

“He was a larger-than-life character,” said Joe Villari, manager at the Bull Run Mountains Natural Area Preserve, where Mr. Martin contributed research for the Virginia Outdoors Foundation. “He absolutely loved to bring anyone into his world: naturalists, other herpetologists, interested hikers. He was one of a kind.”

William Henry Martin III was born Dec. 24, 1941, in Leesburg, Va., and was exploring the nearby woods looking for snakes before he was 10 years old.

When he was 13, Mr. Martin came across a previously unknown population of timber rattlers in the Bull Run Mountains. The boy contacted herpetologist Leslie Burger at the College of William & Mary, who agreed to visit the site to check.

“Dr. Burger was thrilled, as the kid was right,” wrote Villari, who said Mr. Martin’s discovery began a lifelong interest in the Bull Run rattlers.

At age 17 - with notebooks full of field observations - Mr. Martin became a founding member of the Virginia Herpetological Society.

He served as a paratrooper in the Vietnam War with the Army’s 101st Airborne Division and was a bantamweight boxer in military bouts. After his discharge, he used the GI Bill to help cover his studies at the University of South Florida, graduating in 1969 with a degree in biology.

Then it was back to herpetology. He traveled across Africa, Asia and South America doing independent research on venomous species - and found himself in some hot spots such as Zaire (now the Democratic Republic of Congo) during an Ebola outbreak.

As Mr. Martin’s reputation as a timber rattler expert grew, he was consulted by museums, universities and other groups around the world. In 1999, he assisted Steve Irwin for a “Crocodile Hunter” episode on timber rattlers.

Mr. Martin co-authored “The Timber Rattlesnake: Life History, Distribution, Status, and Conservation Action Plan,” a 450-page study published in 2021 on the species and challenges in its habitat.

Last year, Villari joined Mr. Martin in a seven-hour mountain hike to survey rattlers in a new area. They found nothing. “Not even a shed skin,” Villari said.

He told Mr. Martin that at least it was a nice day to be outside despite, snakes or no snakes.

“Marty stood staring at me with a comically puzzled look,” Villari recalled, “and said, ‘No it’s not!’“