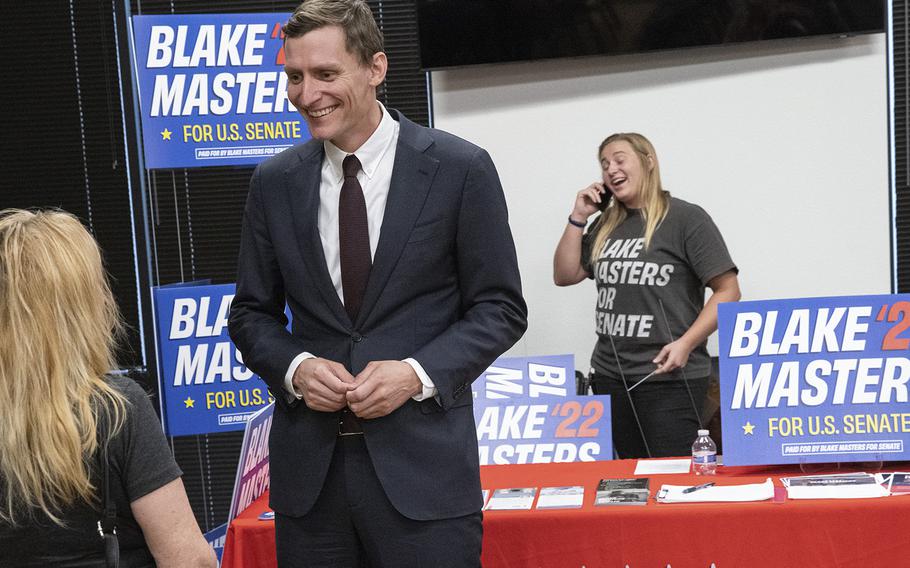 Republican Senate candidate Blake Masters speaks to a voter at the at the Buckeye Community Library Coyote Branch in Buckeye, Ariz., on June 17, 2022. (Caitlin O’Hara for The Washington Post )

Political ad spending in the 2022 midterms has already broken a record for off-year congressional elections and is set to plow through the all-time high of $9 billion spent on the 2020 presidential contest.

Money spent on broadcast, cable, streaming and digital platforms to sway voters ahead of November elections is on track to more than double this year to $9.7 billion from what was spent on the 2018 midterms, according to a projection by AdImpact, a firm that tracks political advertising spending.

It's rare for money spent on off-year elections to exceed that of presidential elections. But the billions already spent in 2022 shows the magnitude — and the stakes — of a November contest that will decide control of Congress. Democrats have a razor-thin majority with the U.S. Senate deadlocked at 50-50. Vice President Kamala Harris wields the deciding vote. 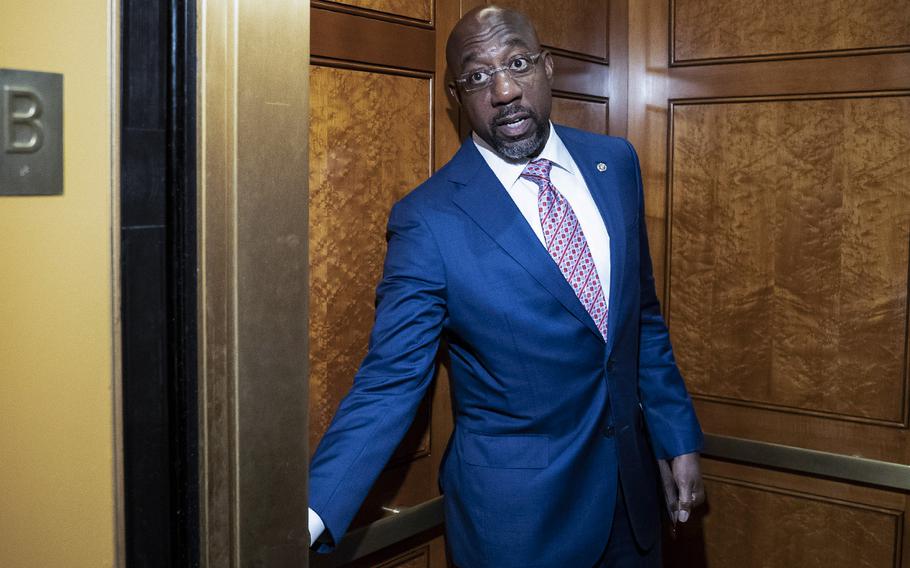 AdImpact forecast that Georgia's U.S. Senate race between Democratic incumbent Senator Raphael Warnock and Republican Herschel Walker, the ex-football star endorsed by former President Donald Trump, will be the nation's most expensive at $276 million. Senate contests in other battlegrounds like Pennsylvania, Arizona and Nevada will also top $200 million.

California, New York, Nevada, Illinois and Michigan are all projected to see $100 million or more deployed in competitive House contests, according to AdImpact.

AdImpact's projections are based on the competitiveness of races, prices in each relevant market and historical and current spending data.

House and Senate candidates have combined to raise $2.4 billion through June 30, according to the Federal Election Commission, even though the cycle hasn't yet entered the closing months, historically the most lucrative.

The ease of making online donations through ActBlue, which has funneled $1.2 billion to Democratic candidates and committees, and its competitor WinRed, which has moved $748 million to Republicans, is also contributing to the growth, according to AdImpact.

Gubernatorial campaigns are also adding to the overall increase in spending, with 38 executive mansions up for grabs, compared to 14 in the last cycle. Down-ballot, non-federal races account for $3.9 billion of the projected $9.7 billion total.

Political ad buys in Florida and Texas are both projected to drop overall, AdImpact projected.

Florida Gov. Ron DeSantis, running unopposed in the Republican primary, has taken in $143 million for his campaign and an allied political action committee. In Texas, Democratic gubernatorial nominee Beto O'Rourke set a fundraising record by taking in $27.6 million from late February to June, while Republican incumbent Governor Greg Abbott's haul was $24.9 million over the same time period.

As Florida increasingly morphs into a Republican stronghold from a swing state, national Democratic groups, including super PACs and party committees, are less likely to invest there, choosing to deploy capital elsewhere. In Texas, redistricting has slashed the number of competitive House seats to just three in 2022 from 12 in 2020.

Illinois's primary earlier this year yielded an unexpected ad blitz, according to AdImpact.

Illinois Democratic Gov. J.B. Pritzker, a billionaire scion of the Hyatt hotel fortune is largely self-funding his campaign. He bought $47 million of advertising in his primary despite facing only token opposition. In the state's Republican gubernatorial primary, Richard Irvin, fueled largely by $50 million from Citadel's Ken Griffin, spent $45 million in an unsuccessful bid.