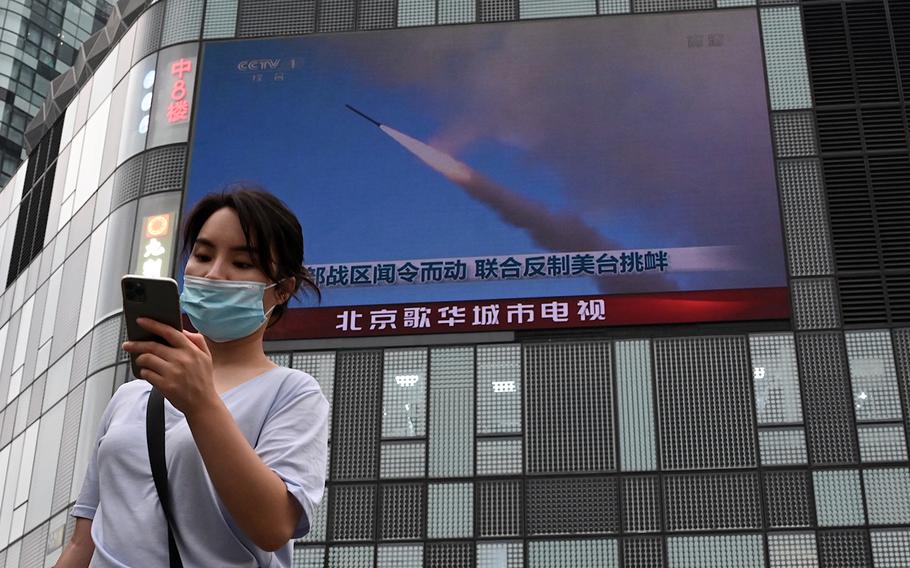 A woman uses her mobile phone as she walks in front of a large screen showing a news broadcast about China’s military exercises encircling Taiwan, in Beijing on Aug. 4, 2022. (Noel Celis/AFP via Getty Images/TNS)

WASHINGTON (Tribune News Service) — As China waged extensive military exercises off of Taiwan last week, a group of American defense experts in Washington was focused on their own simulation of an eventual — but for now entirely hypothetical — U.S.-China war over the island.

The unofficial what-if game is being conducted on the fifth floor of an office building not far from the White House, and it posits a U.S. military response to a Chinese invasion in 2026. Even though the participants bring an American perspective, they are finding that a U.S.-Taiwan victory, if there is one, could come at a huge cost.

“The results are showing that under most — though not all — scenarios, Taiwan can repel an invasion,” said Mark Cancian, a senior adviser at the Center for Strategic and International Studies, where the war games are being held. “However, the cost will be very high to the Taiwanese infrastructure and economy and to U.S. forces in the Pacific.”

In sessions that will run through September, retired U.S. generals and Navy officers and former Pentagon officials hunch like chess players over tabletops along with analysts from the CSIS think tank. They move forces depicted as blue and red boxes and small wooden squares over maps of the Western Pacific and Taiwan. The results will be released to the public in December.

The not-necessarily-so assumption used in most of the scenarios: China invades Taiwan to force unification with the self-governed island, and the U.S. decides to intervene heavily with its military. Also assumed but far from certain: Japan grants expanded rights to use U.S. bases located on its territory, while stopping short of intervening directly unless Japanese land is attacked. Nuclear weapons aren’t used in the scenarios, and the weapons available are based on capabilities the nations have demonstrated or have concrete plans to deploy by 2026.

China’s test-firing of missiles in recent days in response to US House Speaker Nancy Pelosi’s visit to Taiwan underscored a Chinese capability that’s already assumed in the gameplay.

In 18 of the 22 rounds of the game played to this point, Chinese missiles sink a large part of the U.S. and Japanese surface fleet and destroy “hundreds of aircraft on the ground,” according to Cancian, a former White House defense budget analyst and retired U.S. Marine. “However, allied air and naval counterattacks hammer the exposed Chinese amphibious and surface fleet, eventually sinking about 150 ships.”

“The reason for the high U.S. losses is that the United States cannot conduct a systematic campaign to take down Chinese defenses before moving in close,” he said. “The United States must send forces to attack the Chinese fleet, especially the amphibious ships, before establishing air or maritime superiority,” he said. “To get a sense of the scale of the losses, in our last game iteration, the United States lost over 900 fighter/attack aircraft in a four-week conflict. That’s about half the Navy and Air Force inventory.”

The Chinese missile force “is devastating while the inventory lasts” so U.S. submarines and bombers with long-range missiles “are particularly important,” he said. “For the Taiwanese, anti-ship missiles are important, surface ships and aircraft less so.” Surface ships “have a hard time surviving as long as the Chinese have long-range missiles available,” Cancian said. The game players haven’t made any estimates so far on the number of lives that would be lost or the sweeping economic impact of such a conflict between the U.S. and China, the world’s two largest economies.

Taiwan’s defense capabilities are an especially important part of the calculations, because its forces would be responsible for blunting and containing Chinese landings from the south — a scenario played out in the simulation.

“The success or failure of the ground war depends entirely on the Taiwanese forces,” Cancian said. “In all game iterations so far, the Chinese could establish a beachhead but in most circumstances cannot expand it. The attrition of their amphibious fleet limits the forces they can deploy and sustain. In a few instances, the Chinese were able to hold part of the island but not conquer the entire island.”

Anti-ship missiles — U.S.-made Harpoons and Taiwanese-made weapons that the island democracy fields — would play a large role in the early destruction of the Chinese amphibious landing force, while Taiwan’s Navy and half of its air force would be destroyed in the first days of the conflict, according to the modeling so far.

“Taiwan is a large island, and its army is not small,” said Eric Heginbotham, a principal research scientist at the MIT Center for International Studies in Cambridge, Massachusetts, who’s participating in the war game. “But from a qualitative standpoint, Taiwan’s army is not at all what it should be, and we have built that into the game. The transition to an all-volunteer military has been botched, and although conscripts remain an important component, the conscripts serve only four months.”

Perhaps the most disconcerting takeaway for Washington: The high-cost sequences conducted so far aren’t even the most challenging hypotheticals.

“We have not run the most pessimistic scenarios, where China might conquer the entire island,” Cancian said.

He said the four remaining rounds of the war games will “investigate some alternative scenarios — like the U.S. delaying its support for Taiwan, strict Japanese neutrality and a pessimistic scenario that gives China a variety of advantages.”

David Ochmanek, a Rand Corp. senior defense researcher and former U.S. deputy assistant defense secretary, said a CSIS exercise he participated in was “well-run and credibly adjudicated.” Ochmanek, who has participated in dozens of China-U.S. war games, both unclassified and classified, said, “It basically replicated the results of other games that I’ve played that were set in the same time epoch and used the same basic scenario.”

The keys to “any good game are to get knowledgeable players who can faithfully and creatively simulate what their nation’s forces would do and to get adjudicators — umpires, essentially — who can credibly assess the outcomes of engagements and battles,” Ochmanek said. War games are played frequently by governments and outside organizations worldwide. But instructions to the participants in the CSIS project say that although the Pentagon “has conducted many such war games, they are all classified. As a result, information in the public domain is extremely limited. This project will fill that gap in public knowledge and thereby encourage discussion about U.S. force structure and policies.”