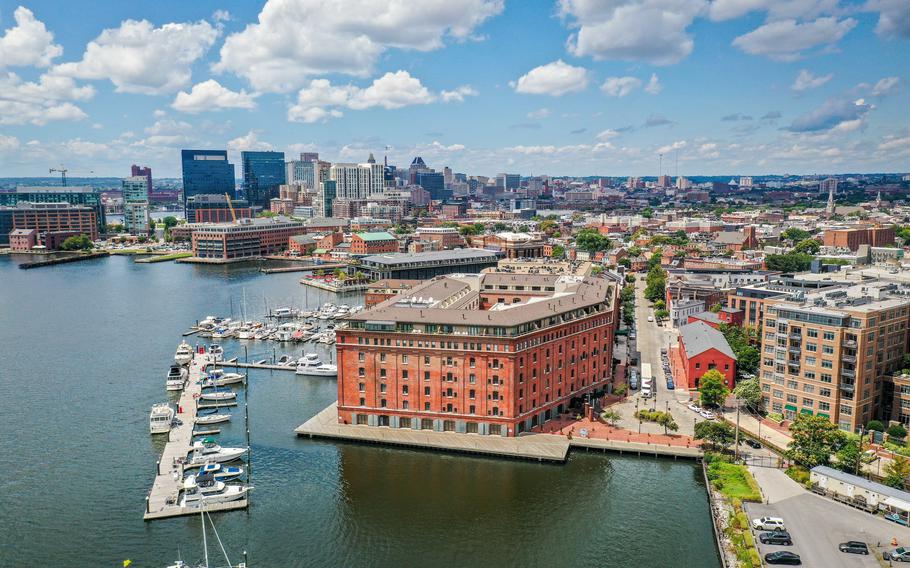 The Army Corps of Engineers has proposed a $134M plan for new flood walls, floodproofing to prevent future storm damage in Baltimore. The proposal calls for flood walls only to keep water out of the citys two main highway tunnels instead of using such barriers to protect waterfront neighborhoods such as Fells Point. (Jerry Jackson, Baltimore Sun/TNS)

BALTIMORE (Tribune News Service) — To prevent damage from storms such as Sandy in 2012 and Isabel, a watershed flood event for Baltimore in 2003, the Army Corps of Engineers has been studying for years whether widespread sea walls or massive storm surge barriers would help.

A new plan it is floating for communities along Patapsco River shores includes neither.

The Army Corps’ proposal calls for flood walls only to keep water out of the city’s two main highway tunnels. Instead of using such barriers to protect waterfront neighborhoods, including the Inner Harbor and Fells Point, its plan suggests floodproofing more waterfront homes and businesses to keep water out, or at least minimize its damage.

Such improvements would be up to individual property owners, who could seek government money to cover costs.

The plans are raising questions about how coastal communities should be preparing for the inevitable storms to come.

The Army Corps said its plans for Baltimore aim to balance waterfront access and historic preservation with a need to better armor against rising seas and strengthening storms. But some are questioning why the proposals don’t extend to vulnerable parts of the city that are poorer and more diverse, and whether there should be broader, more organized regional and statewide investments in storm readiness.

“It is a collective burden, and we need a collective response,” said Del. Robbyn Lewis, a Democrat who represents South and Southeast Baltimore.

The plan, which is in the midst of a public review process and would require congressional approval to move forward, is estimated to cost $134 million, with construction starting in the late 2020s. Despite that cost, the Army Corps estimates the region would save $4 million a year, on average, in avoided storm damage repairs from 2031 through 2080.

The agency is seeking input on the plan — one set of possible solutions within a range of alternatives being considered to address flooding — via its website through Aug. 19. The project could advance from feasibility study into design work by 2024.

Once that phase begins, it would become clearer how much money could be available to waterfront residents and businesses and what sorts of flooding prevention solutions might be available to them, said Cynthia Mitchell, a Corps of Engineers spokeswoman. But before that, the agency is taking input to help shape next steps.

“This is a tentative plan,” said Joseph Bieberich, project manager on the coastal storm risk study for the Army Corps.

While he said feedback from the community would help shape its final form, “it won’t change drastically.”

Other options the Corps considered include proposals to build sea walls around the Inner Harbor, Fells Point, Canton and Locust Point, as well as the Seagirt Marine Terminal at the Port of Baltimore and the Wheelabrator incinerator in Southwest Baltimore. The study also explored constructing massive storm surge barriers near the mouth of the Patapsco River and in the Middle Branch.

The plan as it is being presented to the public this summer avoids some of those more expensive and complex ideas in part because of the impact they might have on tourism and aesthetics, changing or severing connections to the water.

While such solutions might dramatically lower flood risks, they often come at a cost that isn’t worth those benefits, said Sandy Hertz, director of the office of climate change resilience and adaptation at the Maryland Department of Transportation.

“It’s a very challenging project,” said Hertz, whose agency has partnered with the Army Corps on its study. “If it was easy, flooding and climate resiliency would have already been accomplished.”

The effort is necessary to prevent storm damage from repeating or becoming even more severe. 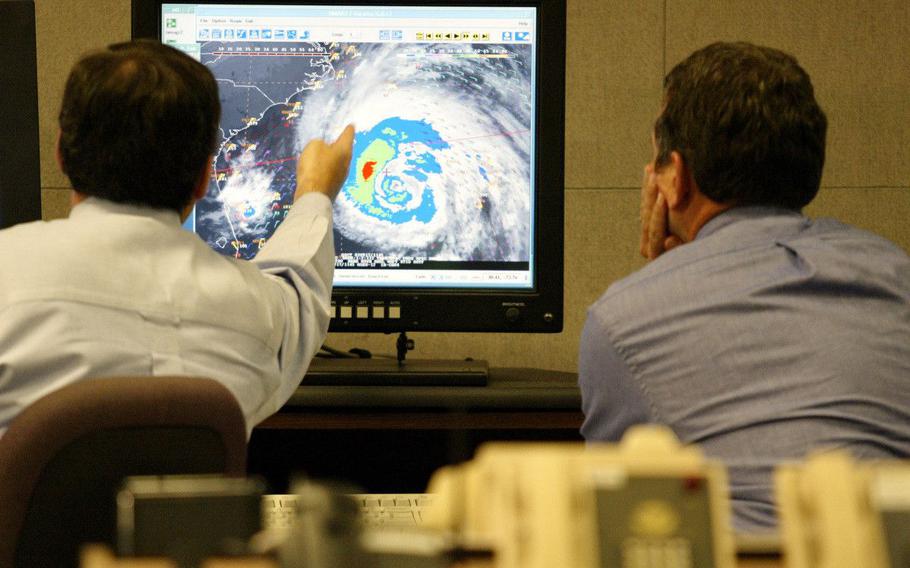 Hurricane forecaster James Franklin (L) and Dr. Richard Pasch discuss Hurricane Isabel at the National Hurricane Center in Miami, Sept. 17, 2003. Isabel was on a path that would bring it ashore on Sep.r 18 on the North Carolina coast, then north along the Chesapeake Bay near Washington D.C., through Virginia, Maryland and Pennsylvania, the U.S. National Hurricane Center said. (Marc Serota, Reuters/TNS) 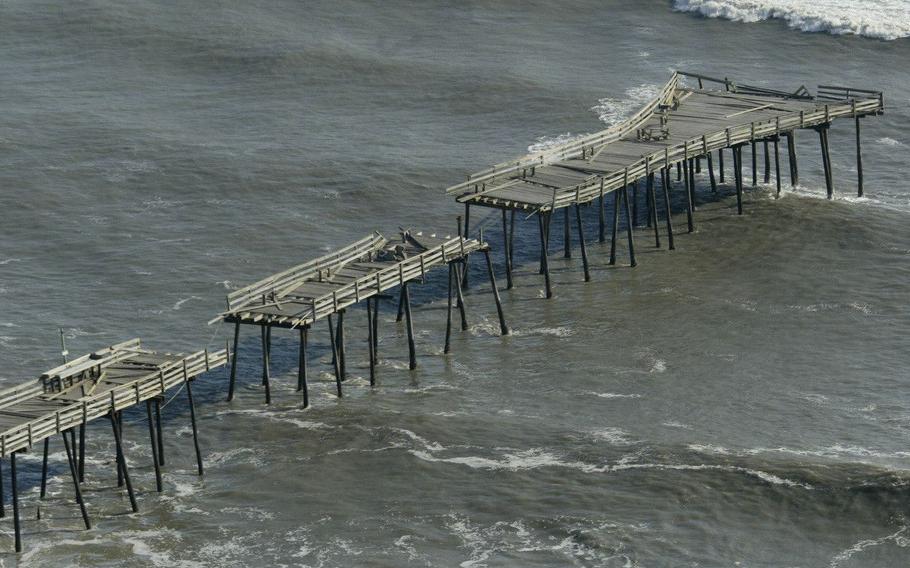 A pier damaged by Hurricane Isabel is shown in Kitty Hawk, N.C., Sept. 19, 2003. The storm has left 13 dead and 4.5 million homes and businesses without power from the Carolinas to New York. (Joe Skipper, Reuters/TNS) 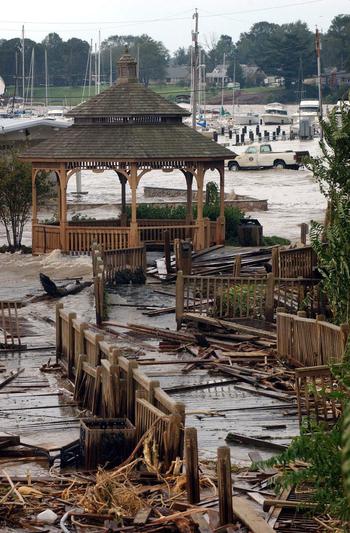 Devastations left behind by Hurricane Isabel in the costal town of Havre de Grace. The waterfront promenade near Tydings Park Marina is completely destroyed by Hurricane Isabel and tidal water flooded the marina's parking lot in over two feet of water. (Kenneth K. Lam, Baltimore Sun/TNS)

In 2003, Isabel caused $252 million in damage in southern Baltimore County and $4.8 million in Baltimore, according to the Corps. The agency says flooding routinely causes more than $2 million in damages every year, and with sea level expected to rise anywhere from a foot to 5 feet by 2100, depending on how fast greenhouse gas emissions continue to increase, flooding threats are growing.

The Corps’ work comes out of a response to Superstorm Sandy, which the agency said demonstrated the power of increasingly severe storms and our vulnerability to them. A similar planning process is underway in the New York region, hit hard by Sandy and potentially in line for tens of billions of dollars in flood prevention projects.

In some parts of Baltimore, it is Isabel’s flooding that remains fresh in the minds of longtime residents. The storm’s path, making landfall in North Carolina and swiping Maryland from the west, meant storm surge swelled up the Chesapeake Bay, severely flooding everywhere from Somerset and Dorchester counties to Kent Island, Annapolis and Baltimore. Floodwaters killed one person in Maryland, while seven other deaths in the state were linked to the storm.

David Martz, a real estate agent who lives in Fells Point, said he knows his area would be among the first and most dramatically impacted if another storm like Isabel hits. His South Ann Street basement flooded in the September 2003 storm.

He said he recently got an email informing him about the Army Corps’ study, and that it talked about measures such as moving heating equipment and electrical panels out of the basement.

Such a strategy, known as wet floodproofing, also would require installation of flood vents so water can pass through a building with minimal damage. Alternatively, the Corps plan also suggests dry floodproofing in some cases, sealing basements and equipping them with floodgates that can be put in place before storms.

Martz said he is skeptical that taking such efforts all across Baltimore’s waterfront would be practical.

“How would they propose me moving all of that upstairs?” Martz asked. “The intentions are good, but implementation would be just, I think, very costly.” 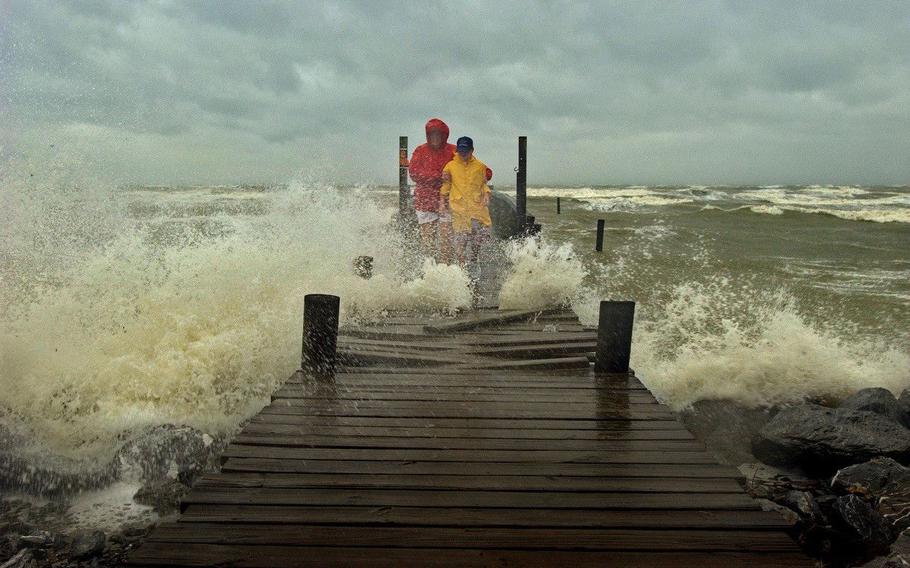 Elise Feldman stands by her son Josh Feldman, 11 of Leonardtown, Md., cautiously watching their footing as the pier breaks up from the force of the waves pounding the boards loose as Hurricane Isabel slams into the eastern seaboard and into the mid-Atlantic states September 18, 2003. (Karl Merton Ferron, Baltimore Sun/TNS)

Others question why the proposed work is limited to neighborhoods that line the Patapsco’s Northwest Branch — ones that are largely white and where property values are high — and leaves out communities to the south along the Middle Branch.

Curtis Bay, for example, is surrounded by dozens of industrial and formerly industrial sites, many of which handle hazardous materials, said Meleny Thomas, a resident involved with the Community of Curtis Bay Association and executive director of the South Baltimore Community Land Trust. That includes a CSX facility where there was a December explosion about which residents are still awaiting answers.

But those potential hazards are not part of the Corps’ plans, and Thomas said her community hasn’t been engaged on the project.

The Corps plan notes there is an existing effort to use Federal Emergency Management Agency funding to improve resiliency, waterfront access, recreation and ecosystem health around the area, known as the Reimagine Middle Branch project.

Others who attended recent public meetings about the Corps plan questioned why there isn’t more focus in Baltimore County, where Isabel’s damage was more costly. The Corps has separately been working with county officials and residents in the Turner Station community, a historically Black neighborhood near Dundalk, on a plan to address repeated flooding issues there.

Lewis said she supports efforts to help prepare the region for extreme weather, but questions why more hasn’t been done to act on existing plans to improve sustainability and resiliency. She said she hopes that changes soon.

“I do worry our response is still quite piecemeal, even though smart people have invested a lot of energy,” Lewis said.