It's about to get easier to access to affordable naloxone 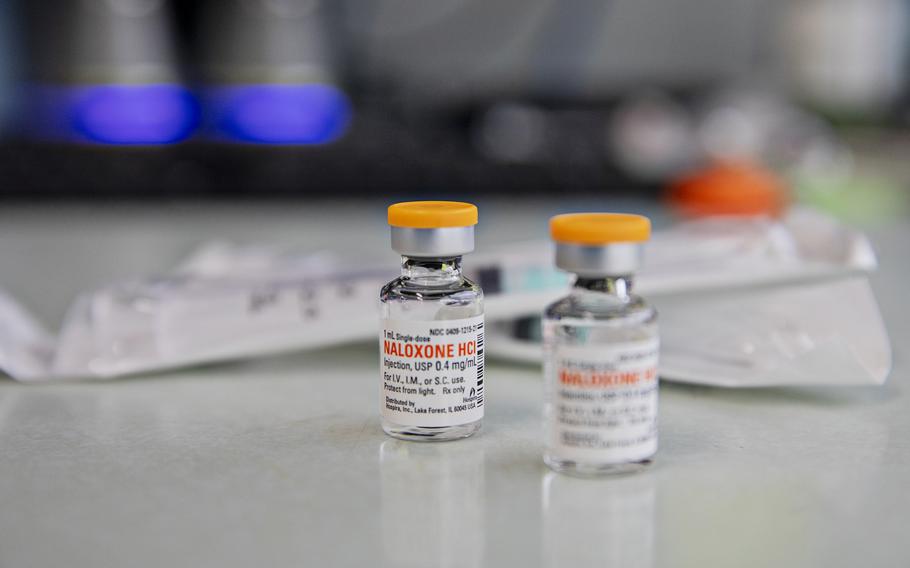 The first shipment of naloxone in a new national effort to reverse overdoses arrived somewhat unceremoniously.

Delayed by shipping wait times and packaged in nondescript cardboard, 100,000 doses of Pfizer's injectable drug were delivered Wednesday by a driver, who steered two massive pallets into an unassuming warehouse that's home to the newly created nonprofit Remedy Alliance, which is expected to distribute mass amounts of cheap naloxone to smaller community groups. Co-founder Eliza Wheeler took in the scene of the shoulder-high stacks.

"It's going to save many lives," she said to the delivery man, explaining there was an opioid overdose antidote within the boxes. Already, 43,000 of those doses were preordered by more than 100 harm reduction groups across the country. In total, just the first shipment alone could save thousands of lives, according to the nonprofit.

Researchers found that there is no state with enough naloxone to meet demand, even as drug overdoses have surged to a record high. But Remedy Alliance organizers, Wheeler, Maya Doe-Simkins and Nabarun Dasgupta, say they've found a novel solution, declaring that "the affordable naloxone shortage is officially over." Their success, according to drug policy experts, underscores how far behind governments are, compared with unofficial efforts at amassing a satisfactory and affordable supply.

The organizers, who previously operated an informal buyer's club for naloxone, say they will be able to get more of the antidote into the hands of people who use drugs. They credit two major developments: agreements with drugmakers to buy the drug at a discounted rate; and a restructured system that allows grass-roots groups to order naloxone directly through an online store, circumventing a complicated web of federal regulations that has restricted the flow of naloxone in the past.

"We think this will totally change the landscape of naloxone in the United States," said Dasgupta, the nonprofit's board president and a scientist at the Gillings School of Global Public Health at the University of North Carolina at Chapel Hill.

The organizers believe that their efforts, formerly called Opioid Safety and Naloxone Network Buyers Club, have reversed thousands of opioid overdoses. The club distributed 1.3 million doses in a year. Now, in the form of a nonprofit, they expect to grow rapidly, projecting a new total of 1.8 million to 2 million doses in the next 12 months.

That could be tens of thousands of lives saved in a year, according to Remedy Alliance, at a time the nation has eclipsed 100,000 drug overdose deaths every 12 months, disproportionately killing Black and Native American people.

These doses are more likely to reach those who need naloxone, as people who use drugs rely on groups that practice harm reduction, a method of addressing the consequences of drug use by providing clean needles and other lifesaving paraphernalia, according to Remedy Alliance and Kendall LaSane, a UNC-CH doctoral student conducting independent research on the nonprofit's efforts.

Remedy Alliance accounts for "a substantial portion" of the naloxone that's distributed across the country, Reagan-Udall Foundation chief executive Susan Winckler said, especially to community groups that are more trusted by people who use drugs, rather than pharmacies or law enforcement, which users avoid due to fears of stigmatization or arrest.

"I think Remedy Alliance has found an elegant solution," said Winckler, whose foundation is compiling data on how much naloxone is produced.

The creation of Remedy Alliance overcomes a critical problem with naloxone distribution, which for years operated in a legal gray area.

Current Food and Drug Administration rules say that only licensed wholesale distributors can distribute prescription drugs, unless the drugs are for "emergency medical reasons." Naloxone manufacturers said they don't know whether harm reduction groups qualified for the exception and have turned away groups that tried to buy naloxone directly, including the few operating in rural, hard-to-reach communities hardest hit by overdoses and addiction.

Last month, Sens. Maggie Hassan, D-N.H., and Rand Paul, R-Ky., asked the FDA in a letter to clarify its "ambiguous regulations" and "minimize barriers that still impede its purchase, distribution, or use" of naloxone.

But Remedy Alliance isn't waiting for that to happen.

After The Washington Post published an article in August 2021 about the buyer's club struggling to meet the demand for naloxone, Hikma Pharmaceuticals approached the organizers.

Hikma initially donated 50,000 vials to the buyers club when it learned about the supply issue last summer and began to form an agreement to provide custom-produced, discounted naloxone in the long term, company spokesman David Belian said.

Pfizer said its inventory of the single-dose vial was back to normal as of the end of July and is fulfilling all of its orders, spokeswoman Sharon Castillo said.

The then-buyers-club organizers met with senators, the FDA and the White House to lobby for increased access to naloxone, pushing to have it designated an over-the-counter drug and an emergency medication. At the same time, they decided to move forward with forming a nonprofit, allowing them to receive naloxone when other groups are refused and become an umbrella of sorts for harm reduction organizations nationwide.

"There was all this scurrying and hustling and trying to figure out one solution and running it up a flagpole and getting a 'that won't work' or getting a 'that sounds interesting, but I can't say yes' and 'you should talk to so and so,'" Doe-Simkins said. "This was all happening with the backdrop of a naloxone shortage."

The organizers hope governments can direct funding to provide more naloxone through other means, especially since settlements in the national litigation over the opioid epidemic are expected to contribute more than $32 billion to state and local coffers.

Even as more people are dying and the illegal drug supply is becoming increasingly dangerous, the cost of naloxone has continued to increase, rising more rapidly in the past decade, said Sarah Evans, global director of harm reduction at the Open Society Foundations.

Governments are paying more than Remedy Alliance for naloxone, and they are not distributing it as well, Evans said. Even though Remedy Alliance has made strides on both fronts, the cost and distribution, governments must consider how they can replicate that success and expand on it.

"We have to decide as a community and as a society, is it OK to just let people that use drugs die," Evans said. "Is that what we're comfortable with?"